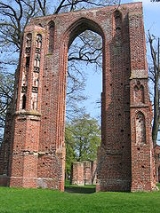 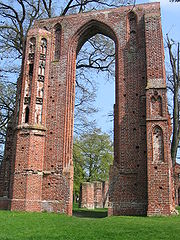 Eldena Abbey originally Hilda Abbey is a former Cistercian monastery near the present town of Greifswald
Greifswald
Greifswald , officially, the University and Hanseatic City of Greifswald is a town in northeastern Germany. It is situated in the state of Mecklenburg-Vorpommern, at an equal distance of about from Germany's two largest cities, Berlin and Hamburg. The town borders the Baltic Sea, and is crossed...
in Mecklenburg-Vorpommern, Germany
Germany
Germany , officially the Federal Republic of Germany , is a federal parliamentary republic in Europe. The country consists of 16 states while the capital and largest city is Berlin. Germany covers an area of 357,021 km2 and has a largely temperate seasonal climate...
. Only ruins survive, which are well-known as a frequent subject of Caspar David Friedrich
Caspar David Friedrich
Caspar David Friedrich was a 19th-century German Romantic landscape painter, generally considered the most important German artist of his generation. He is best known for his mid-period allegorical landscapes which typically feature contemplative figures silhouetted against night skies, morning...
's paintings, including the famous Abtei im Eichwald ("Abbey in the Oak Forest").

In the 12th century the Baltic
Baltic Sea
The Baltic Sea is a brackish mediterranean sea located in Northern Europe, from 53°N to 66°N latitude and from 20°E to 26°E longitude. It is bounded by the Scandinavian Peninsula, the mainland of Europe, and the Danish islands. It drains into the Kattegat by way of the Øresund, the Great Belt and...
coast south of the island of Rügen
Rügen
Rügen is Germany's largest island. Located in the Baltic Sea, it is part of the Vorpommern-Rügen district of Mecklenburg-Vorpommern.- Geography :Rügen is located off the north-eastern coast of Germany in the Baltic Sea...
belonged to the Rani
Rani (Slavic tribe)
The Rani or Rujani were a West Slavic tribe based on the island of Rugia and the southwestern mainland across the Strelasund in what is today northeastern Germany....
principality of Rügen, which in its turn was subject to the Danes
Denmark
Denmark is a Scandinavian country in Northern Europe. The countries of Denmark and Greenland, as well as the Faroe Islands, constitute the Kingdom of Denmark . It is the southernmost of the Nordic countries, southwest of Sweden and south of Norway, and bordered to the south by Germany. Denmark...
. The Danish Cistercian monastery, Esrum Abbey
Esrum Abbey
Esrum Abbey, also Esrom Abbey was the second Cistercian monastery founded in Denmark, located near Hillerød in Region Hovedstaden, on the island of Zealand , on the north side of the Esrum Sø near Esbønderup and Græsted.- Monastery :Esrum Abbey began as a Benedictine foundation, perhaps in about...
, was thus able to found a daughter house in the area, Dargun Abbey, at Dargun
Dargun
Dargun is a town in the Mecklenburgische Seenplatte district , in Mecklenburg-Western Pomerania, Germany. It is situated km west of Demmin. It is famous for Dargun Castle, a former Cistercian abbey.-External links:*...
, west of Demmin
Demmin
Demmin is a town in the Mecklenburgische Seenplatte district, Mecklenburg-Western Pomerania, Germany. It was the capital of the former district Demmin.- Name :...
, in 1172. When in 1198 this monastery was destroyed in fighting between Denmark and Brandenburg
Brandenburg
Brandenburg is one of the sixteen federal-states of Germany. It lies in the east of the country and is one of the new federal states that were re-created in 1990 upon the reunification of the former West Germany and East Germany. The capital is Potsdam...
, Jaromar I, Prince of the Rani, whose wife was of the Danish royal house, offered to re-settle the monks at a new site at the mouth of the River Ryck
Ryck
The Ryck is a river in Mecklenburg-Vorpommern, Germany.From its source near Bartmannshagen, part of the Süderholz community northeast of Grimmen, the Ryck flows for about 28 km to the east, reaching Greifswald shortly before its mouth. The larger part of the river outside Greifswald is also...
, close to the boundary between the territory of the Princes of Rügen, and the County of Gützkow
County of Gützkow
The County of Gützkow was a part of the Duchy of Pomerania during the High Middle Ages , named after the central town of Gützkow and stretching roughly from the Peene River in the South to the Ryck River in the North. It emerged from the earlier Liutician Principality of Gützkow , that was turned...
, since the early 1120s subordinate to the Duchy of Pomerania
Duchy of Pomerania
The Duchy of Pomerania was a duchy in Pomerania on the southern coast of the Baltic Sea, ruled by dukes of the House of Pomerania ....
.

The offer of the site, which included profitable salt-pans, was accepted, and in 1199 Hilda Abbey, now Eldena Abbey,
was founded, and confirmed by Pope Innocent III
Pope Innocent III
Pope Innocent III was Pope from 8 January 1198 until his death. His birth name was Lotario dei Conti di Segni, sometimes anglicised to Lothar of Segni....
in 1204. The princes of Rügen further endowed the new monastery with extensive lands in the border country between the Rügen-owned territories of Gristow and Wostrose (Wusterhusen
Wusterhusen
Wusterhusen is a municipality in the Vorpommern-Greifswald district, in Mecklenburg-Vorpommern, Germany....
), the area of Lositz (Loitz
Loitz
Loitz is a municipality in the Vorpommern-Greifswald district, in Mecklenburg-Western Pomerania, Germany. It is situated on the river Peene, 10 km northeast of Demmin, and 22 km southwest of Greifswald.-External links:*...
) which was debated between Rügen and Mecklenburg
Mecklenburg
Mecklenburg is a historical region in northern Germany comprising the western and larger part of the federal-state Mecklenburg-Vorpommern...
, and the County of Gützkow
County of Gützkow
The County of Gützkow was a part of the Duchy of Pomerania during the High Middle Ages , named after the central town of Gützkow and stretching roughly from the Peene River in the South to the Ryck River in the North. It emerged from the earlier Liutician Principality of Gützkow , that was turned...
.

The monastery became wealthy from the salt trade and was very influential in the Christianisation of Western Pomerania. It also brought about the foundation at the beginning of the 13th century of the town of Greifswald, which started out as the monastery's trading settlement opposite the salt-pans, near the point where the via regia, an important trade route, crossed the river. After the Battle of Bornhöved
Battle of Bornhöved (1227)
The Battle of Bornhöved took place on 22 July 1227 near Bornhöved in Holstein. Count Adolf IV of Schauenburg and Holstein — leading an army consisting of troops from the cities of Lübeck and Hamburg, about 1000 Dithmarsians and combined troops of Holstein next to various north German nobles —...
in 1227 the Danes withdrew from this part of their former territories, and despite some competition from the princes of Rügen, the Duke of Pomerania, Wartislaw III, was able in 1248/49 to pressurise the abbey into subinfeudating Greifswald to him. Wartislaw was later buried in Eldena Abbey, as were later members of the ducal family, the House of Pomerania
House of Pomerania
The House of Griffins or House of Pomerania, , also known as House of Greifen; House of Gryf, was a dynasty of Royal dukes that ruled the Duchy of Pomerania from the 12th century until 1637, after their power was temporarily derivated to Prussian Royal House...
.

Throughout the 13th century, Eldena Abbey organized the cultivation and settlement of its growing estates in the Ostsiedlung
Ostsiedlung
Ostsiedlung , also called German eastward expansion, was the medieval eastward migration and settlement of Germans from modern day western and central Germany into less-populated regions and countries of eastern Central Europe and Eastern Europe. The affected area roughly stretched from Slovenia...
process, allocating and founding Wendish
Wends
Wends is a historic name for West Slavs living near Germanic settlement areas. It does not refer to a homogeneous people, but to various peoples, tribes or groups depending on where and when it is used...
, Danish
Danes
Danish people or Danes are the nation and ethnic group that is native to Denmark, and who speak Danish.The first mention of Danes within the Danish territory is on the Jelling Rune Stone which mentions how Harald Bluetooth converted the Danes to Christianity in the 10th century...
and German
Germans
The Germans are a Germanic ethnic group native to Central Europe. The English term Germans has referred to the German-speaking population of the Holy Roman Empire since the Late Middle Ages....
villages. In the growing town of Greifswald
Greifswald
Greifswald , officially, the University and Hanseatic City of Greifswald is a town in northeastern Germany. It is situated in the state of Mecklenburg-Vorpommern, at an equal distance of about from Germany's two largest cities, Berlin and Hamburg. The town borders the Baltic Sea, and is crossed...
however, the Cistercians of Eldena lost much of their influence the foundation in the town in the mid-13th century of friaries of the Franciscans (Greyfriars) and the Dominicans (Blackfriars).

The east end of the abbey church was built in about 1200, while the conventual buildings date from the mid-13th and 14th centuries, all in Brick Gothic
Brick Gothic
Brick Gothic is a specific style of Gothic architecture common in Northern Europe, especially in Northern Germany and the regions around the Baltic Sea that do not have natural rock resources. The buildings are essentially built from bricks...
. The final stages of construction were the west front and the nave of the church, which were completed in the 15th century.

The abbey was dissolved in 1535, when the Reformation
Protestant Reformation
The Protestant Reformation was a 16th-century split within Western Christianity initiated by Martin Luther, John Calvin and other early Protestants. The efforts of the self-described "reformers", who objected to the doctrines, rituals and ecclesiastical structure of the Roman Catholic Church, led...
was introduced into Pomerania by Duke Philip I, who took over its estates. The buildings were severely damaged during the Thirty Years' War
Thirty Years' War
The Thirty Years' War was fought primarily in what is now Germany, and at various points involved most countries in Europe. It was one of the most destructive conflicts in European history....
. In 1634 the site was given to the University of Greifswald. The buildings fell into dereliction during the Swedish occupation of Western Pomerania (1648–1815) and the bricks were quarried for the building of fortifications. 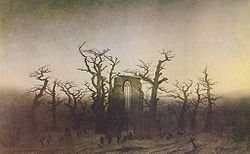 By the beginning of the 19th century, when the Romantic painter Caspar David Friedrich knew the abbey, it was a ruin, which he made the subject of several paintings. Renewed public interest led to the beginning of restoration work in 1828, and on the basis of designs by the Prussian
Kingdom of Prussia
The Kingdom of Prussia was a German kingdom from 1701 to 1918. Until the defeat of Germany in World War I, it comprised almost two-thirds of the area of the German Empire...
landscape gardener Peter Joseph Lenné
Peter Joseph Lenné
Peter Joseph Lenné was a Prussian gardener and landscape architect from Bonn who worked in the German classicist style.-Childhood and development:...
a park was laid out on the abbey precinct.

In 1926/27 scientific excavations were carried out in order to reconstruct the exact layout of the site. In the 1960s further work was carried out to make the site suitable for use for public and cultural events. Still more works were authorised from 1996 onwards jointly by both the State Office for the Preservation of Historical Monuments (Landesamt für Denkmalpflege) and the town of Greifswald, which eventually led to the declaration of the ruins as a cultural site of the "Euroregion Pomerania".