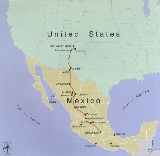 Encyclopedia
El Camino Real de Tierra Adentro National Historic Trail is a part of the United States
United States
The United States of America is a federal constitutional republic comprising fifty states and a federal district...
National Historic Trail
National Historic Trail
National Historic Trail is a designation for a protected area in the United States containing historic trails and surrounding areas. They are part of the National Trails System....
system. El Camino Real de Tierra Adentro (Spanish
Spanish language
Spanish , also known as Castilian , is a Romance language in the Ibero-Romance group that evolved from several languages and dialects in central-northern Iberia around the 9th century and gradually spread with the expansion of the Kingdom of Castile into central and southern Iberia during the...
for "The Royal Road of the Interior Land") was a 1,600 mile (2560 kilometer) long trade route between Mexico City
Mexico City
Mexico City is the Federal District , capital of Mexico and seat of the federal powers of the Mexican Union. It is a federal entity within Mexico which is not part of any one of the 31 Mexican states but belongs to the federation as a whole...
and San Juan Pueblo, New Mexico, from 1598 to 1882. The 404 mile (646 kilometer) section of the route within the United States was proclaimed as a National Historic Trail on October 13, 2000. The trail is overseen by both the National Park Service
National Park Service
The National Park Service is the U.S. federal agency that manages all national parks, many national monuments, and other conservation and historical properties with various title designations...
and the U.S. Bureau of Land Management with aid from El Camino Real de Tierra Adentro Trail Assoc. also known as CARTA.

The trail was unofficially used for trade among native tribes since the earliest of times. It didn't become an official trade route until 1598 when Oñate followed the trail while leading a group of settlers during the era of Spanish conquest. The duration of the trip from the Rio Grande to the San Juan Pueblo was aid to take, by wagon and by foot, approximately 6 months including 2-3 weeks of rest throughout the trip. According to journals kept by settlers they used common animals found along the trail to add to the food they brought along. The trail greatly improved trade among Spanish villages and helped the Spanish conquistadors spread Christianity throughout the conquered lands. The trail was used from 1598 through 1881 when the railroad replaced the need for wagons. Eventually, railroads replaced rutted trails and over time the trail and evidence of it faded from sight and memory. The changes that the railways brought made trade along El Camino much easier and in some cases made travel quite luxurious.

From the Texas
Texas
Texas is the second largest U.S. state by both area and population, and the largest state by area in the contiguous United States.The name, based on the Caddo word "Tejas" meaning "friends" or "allies", was applied by the Spanish to the Caddo themselves and to the region of their settlement in...
-New Mexico
New Mexico
New Mexico is a state located in the southwest and western regions of the United States. New Mexico is also usually considered one of the Mountain States. With a population density of 16 per square mile, New Mexico is the sixth-most sparsely inhabited U.S...
border to San Juan Pueblo
San Juan Pueblo
San Juan Pueblo may refer to*old name of Ohkay Owingeh, New Mexico*San Juan Pueblo...
north of Española, a drivable route, mostly part of former U.S. Route 85, has been designated as a National Scenic Byway
National Scenic Byway
A National Scenic Byway is a road recognized by the United States Department of Transportation for its archeological, cultural, historic, natural, recreational, and/or scenic qualities. The program was established by Congress in 1991 to preserve and protect the nation's scenic but often...
called El Camino Real.

Portions of the trade route corridor also contain pedestrian, bicycle, and equestrian trails. These include the existing Paseo del Bosque Trail in Albuquerque
Albuquerque, New Mexico
Albuquerque is the largest city in the state of New Mexico, United States. It is the county seat of Bernalillo County and is situated in the central part of the state, straddling the Rio Grande. The city population was 545,852 as of the 2010 Census and ranks as the 32nd-largest city in the U.S. As...
and portions of the proposed Rio Grande Trail
Rio Grande Trail
The Rio Grande Trail is a proposed long distance trail along the Rio Grande in the U.S. state of New Mexico. The river extends over 1,800 total miles, some of which pass though the heart of New Mexico. It is the state's primary drainage feature and most valuable natural and cultural resource...
. Its northern terminus, Santa Fe
Santa Fe, New Mexico
Santa Fe is the capital of the U.S. state of New Mexico. It is the fourth-largest city in the state and is the seat of . Santa Fe had a population of 67,947 in the 2010 census...
, is a terminus also of the Old Spanish Trail
Old Spanish Trail
Old Spanish Trail may refer to:*Old Spanish Trail , connecting Santa Fe, New Mexico with Los Angeles, California in the 19th century...
and the Santa Fe Trail
Santa Fe Trail
The Santa Fe Trail was a 19th-century transportation route through central North America that connected Missouri with Santa Fe, New Mexico. Pioneered in 1822 by William Becknell, it served as a vital commercial and military highway until the introduction of the railroad to Santa Fe in 1880...
.

Along the trail, paraje
Paraje
Paraje, a Spanish term in use among English speakers in the southwestern United States, refers to a camping place along a long distance trail where travelers customarily stopped for the night. A paraje can be a town, a village or pueblo, a caravanserai, or simply a good location for stopping...
s (stop overs) that have been preserved today include El Rancho de las Golondrinas
El Rancho de las Golondrinas
El Rancho de las Golondrinas is a former ranch in the northern part of the U.S. state of New Mexico that has been recreated as a "living museum". Going north it was the last camping place on the Camino Real before reaching Santa Fe, New Mexico and a day's journey south of Santa Fe...
.

El Camino Real de Tierra Adentro Trail Association (CARTA) is a non-profit trail organization that aims to help promote, educate, and preserve the cultural and historic trail in collaboration with the National Park Service, the Bureau of Land Management, the New Mexico Department of Cultural Affairs and various Mexican organizations. CARTA publishes an informative journal, Chronicles of the Trail, quarterly that provides people with further history and current affairs of the trail and what CARTA, as an organization, is doing to help the trail.