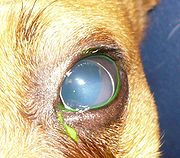 Ectopia lentis is a displacement or malposition of the eye
Eye
Eyes are organs that detect light and convert it into electro-chemical impulses in neurons. The simplest photoreceptors in conscious vision connect light to movement...
's crystalline lens
Lens (anatomy)
The crystalline lens is a transparent, biconvex structure in the eye that, along with the cornea, helps to refract light to be focused on the retina. The lens, by changing shape, functions to change the focal distance of the eye so that it can focus on objects at various distances, thus allowing a...
from its normal location. A partial dislocation of a lens is termed lens subluxation or subluxated lens; a complete dislocation of a lens is termed lens luxation or luxated lens.


Ectopia lentis in dogs and cats

Although observed in humans and cats, ectopia lentis is most commonly seen in dog
Dog
The domestic dog is a domesticated form of the gray wolf, a member of the Canidae family of the order Carnivora. The term is used for both feral and pet varieties. The dog may have been the first animal to be domesticated, and has been the most widely kept working, hunting, and companion animal in...
s. Ciliary zonules
Zonule of Zinn
The zonule of Zinn is a ring of fibrous strands connecting the ciliary body with the crystalline lens of the eye....
normally hold the lens in place. Abnormal development of these zonules can lead to primary ectopia lentis, usually a bilateral condition. Luxation can also be a secondary condition, caused by trauma, cataract
Cataract
A cataract is a clouding that develops in the crystalline lens of the eye or in its envelope, varying in degree from slight to complete opacity and obstructing the passage of light...
formation (decrease in lens diameter may stretch and break the zonules), or glaucoma
Glaucoma
Glaucoma is an eye disorder in which the optic nerve suffers damage, permanently damaging vision in the affected eye and progressing to complete blindness if untreated. It is often, but not always, associated with increased pressure of the fluid in the eye...
(enlargement of the globe stretches the zonules). Steroid administration weakens the zonules and can lead to luxation as well. Lens luxation in cats can occur secondary to anterior uveitis
Uveitis
Uveitis specifically refers to inflammation of the middle layer of the eye, termed the "uvea" but in common usage may refer to any inflammatory process involving the interior of the eye....
(inflammation of the inside of the eye).

With anterior lens luxation, the lens pushes into the iris
Iris (anatomy)
The iris is a thin, circular structure in the eye, responsible for controlling the diameter and size of the pupils and thus the amount of light reaching the retina. "Eye color" is the color of the iris, which can be green, blue, or brown. In some cases it can be hazel , grey, violet, or even pink...
or actually enters the anterior chamber
Anterior chamber
The anterior chamber is the fluid-filled space inside the eye between the iris and the cornea's innermost surface, the endothelium. Aqueous humor is the fluid that fills the anterior chamber. Hyphema and glaucoma are two main pathologies in this area. In hyphema, blood fills the anterior chamber...
of the eye. This can cause glaucoma
Glaucoma
Glaucoma is an eye disorder in which the optic nerve suffers damage, permanently damaging vision in the affected eye and progressing to complete blindness if untreated. It is often, but not always, associated with increased pressure of the fluid in the eye...
, uveitis, or damage to the cornea
Cornea
The cornea is the transparent front part of the eye that covers the iris, pupil, and anterior chamber. Together with the lens, the cornea refracts light, with the cornea accounting for approximately two-thirds of the eye's total optical power. In humans, the refractive power of the cornea is...
. Uveitis (inflammation of the eye) causes the pupil to constrict (miosis
Miosis
Miosis is the constriction of the pupil of the eye to two millimeters or less...
) and trap the lens in the anterior chamber, leading to an obstruction of outflow of aqueous humour
Aqueous humour
The aqueous humour is a clear, gelatinous fluid similar to plasma, but containing low-protein concentrations. It is secreted from the ciliary epithelium, a structure supporting the lens. It is located in the space between the lens and the cornea...
and subsequent increase in ocular pressure (glaucoma). Surgery to remove the lens has a higher success rate (retained vision and normal intraocular pressure) when it is performed before the onset of secondary glaucoma. Glaucoma secondary to anterior lens luxation is less common in cats than dogs due to their naturally deeper anterior chamber and the liquification of the vitreous humour
Vitreous humour
The vitreous humour or vitreous humor is the clear gel that fills the space between the lens and the retina of the eyeball of humans and other vertebrates...
secondary to chronic inflammation. Anterior lens luxation is considered to be an ophthalmological emergency.

With posterior lens luxation, the lens falls back into the vitreous humour and lies on the floor of the eye. This type causes less problems than anterior lens luxation, although glaucoma or ocular inflammation may occur. Surgery is used to treat dogs with significant symptoms. Removal of the lens before it moves to the anterior chamber may prevent secondary glaucoma.

Lens subluxation is also seen in dogs and is characterized by a partial displacement of the lens. It can be recognized by trembling of the iris (iridodonesis) or lens (phacodonesis) and the presence of an aphakic crescent (an area of the pupil where the lens is absent). Other signs of lens subluxation include mild conjunctiva
Conjunctiva
The conjunctiva covers the sclera and lines the inside of the eyelids. It is composed of rare stratified columnar epithelium.-Function:...
l redness, vitreous humour degeneration, prolapse of the vitreous into the anterior chamber, and an increase or decrease of anterior chamber depth. Removal of the lens before it completely luxates into the anterior chamber may prevent secondary glaucoma. A nonsurgical alternative involves the use of a miotic to constrict the pupil and prevent the lens from luxating into the anterior chamber.

Terrier breeds are predisposed to lens luxation, and it is probably inherited in the Sealyham Terrier
Sealyham Terrier
The Sealyham Terrier is a dog breed of the terrier type. The Sealyham Terrier was originally developed in Wales.- History :thumb|right|A Sealyham Terrier photographed in 1915....
, Jack Russell Terrier
Jack Russell Terrier
The Jack Russell terrier is a small terrier that has its origins in fox hunting. It is principally white-bodied smooth, rough or broken-coated which is commonly confused with the Parson Russell terrier and the Russell terrier with the term "Jack Russell" commonly misapplied to other small white...
, Wirehaired Fox Terrier
Fox Terrier (Wire)
The Wire Fox Terrier is a breed of dog, one of many terrier breeds. It is an instantly recognizable fox terrier breed. Although it bears a resemblance to the Smooth Fox Terrier, they are believed to have been developed separately.-Appearance:...
, Rat Terrier
Rat Terrier
The Rat Terrier is an American dog breed with a rich and varied background as an all-around farm dog and hunting companion. Traditionally more of a type than a breed, they share much ancestry with the tough little mixed-breed dogs known as feists...
, Teddy Roosevelt Terrier
Teddy Roosevelt Terrier
-Description:The Teddy Roosevelt Terrier is an American hunting terrier that is a small to medium sized terrier. Lower-set with shorter leg, more muscular, and heavier bone density than its cousin the American Rat Terrier...
, Tibetan Terrier
Tibetan Terrier
The Tibetan Terrier is not a member of the terrier group, the name being given to it by European travelers to Tibet who were reminded of terriers from back home when they first encountered the breed...
, Miniature Bull Terrier
Bull Terrier (Miniature)
The Bull Terrier is a breed with origins in the English White Terrier, the Dalmatian and the Bulldog. The first existence is documented 1872 in The Dogs of British Island.-Appearance:...
, Shar Pei
Shar Pei
The Shar Pei, or Chinese Shar-Pei, is a breed of dog known for its distinctive features of deep wrinkles and a blue-black tongue. The breed comes from China. The name translates to "sand skin" and refers to the texture of its short, rough coat...
, and Border Collie
Border Collie
The Border Collie is a herding dog breed developed in the Anglo-Scottish border region for herding livestock, especially sheep. It is the most widespread of the collie breeds....
. The mode of inheritance in the Tibetan Terrier and Shar Pei is likely autosomal recessive. Labrador Retriever
Labrador Retriever
The Labrador Retriever is one of several kinds of retriever, a type of gun dog. A breed characteristic is webbed paws for swimming, useful for the breed's original purpose of retrieving fishing nets. The Labrador is the most popular breed of dog by registered ownership in Canada, the United...
s and Australian Cattle Dog
Australian Cattle Dog
The Australian Cattle Dog is a breed of herding dog originally developed in Australia for droving cattle over long distances across rough terrain. In the 19th century, New South Wales cattle farmer Thomas Hall crossed the dogs used by drovers in his parents' home county, Northumberland, with...
s are also predisposed.

In humans, there are a number of systemic conditions that are associated with ectopia lentis: