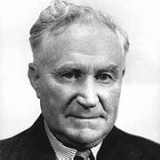 Encyclopedia
Sir Earle Christmas Grafton Page, GCMG
Order of St Michael and St George
The Most Distinguished Order of Saint Michael and Saint George is an order of chivalry founded on 28 April 1818 by George, Prince Regent, later George IV of the United Kingdom, while he was acting as Prince Regent for his father, George III....
, CH
Order of the Companions of Honour
The Order of the Companions of Honour is an order of the Commonwealth realms. It was founded by King George V in June 1917, as a reward for outstanding achievements in the arts, literature, music, science, politics, industry or religion....
(8 August 188020 December 1961) was the 11th Prime Minister of Australia, and is to date the second-longest serving federal parliamentarian in Australian history, with 41 years, 361 days in Parliament.

Born in Grafton
Grafton, New South Wales
The city of Grafton is the commercial hub of the Clarence River Valley. Established in 1851, Grafton features many historic buildings and tree-lined streets. Located approximately 630 kilometres north of Sydney and 340 km south of Brisbane, Grafton and the Clarence Valley can be reached...
, New South Wales, Page was educated at Sydney Boys High School
Sydney Boys High School
Sydney Boys High School is an academically selective public secondary school for boys, located in the City of Sydney, Sydney, New South Wales, Australia, with 1,180 students, from years 7 to 12...
and the University of Sydney
University of Sydney
The University of Sydney is a public university located in Sydney, New South Wales. The main campus spreads across the suburbs of Camperdown and Darlington on the southwestern outskirts of the Sydney CBD. Founded in 1850, it is the oldest university in Australia and Oceania...
, where he graduated in medicine at the top of his year in 1901. He worked at Sydney's Royal Prince Alfred Hospital
Royal Prince Alfred Hospital
The Royal Prince Alfred Hospital is a major public teaching hospital in Sydney, Australia, located on Missenden Road in Camperdown...
, where he met Ethel Blunt, a nurse, whom he married in 1906. In 1903 he joined a private practice in Grafton and in 1904 he became one of the first people in the country to own a car. He practised in Sydney and Grafton before joining the Australian Army
Australian Army
The Australian Army is Australia's military land force. It is part of the Australian Defence Force along with the Royal Australian Navy and the Royal Australian Air Force. While the Chief of Defence commands the Australian Defence Force , the Army is commanded by the Chief of Army...
as a medical officer in the First World War, serving in Egypt
Sinai and Palestine Campaign
The Sinai and Palestine Campaigns took place in the Middle Eastern Theatre of World War I. A series of battles were fought between British Empire, German Empire and Ottoman Empire forces from 26 January 1915 to 31 October 1918, when the Armistice of Mudros was signed between the Ottoman Empire and...
. After the war he went into farming and was elected Mayor of Grafton.

Page continued his professional medical practice, and on 22 October 1924 he had to tell his best friend, Thomas Shorten Cole, the news that his wife Mary Ann Crane had just died on the operating table from complications of intestinal or stomach cancer – reputed by their daughter Dorothy May Cole to be "the worst day of his life".

He was a strong believer in orthodox finance and conservative policies, except where the welfare of farmers was concerned: then he was happy to see government money spent freely. He was also a "high protectionist": a supporter of high tariff barriers to protect Australian rural industries.

The Bruce-Page government was defeated by Labor
Australian Labor Party
The Australian Labor Party is an Australian political party. It has been the governing party of the Commonwealth of Australia since the 2007 federal election. Julia Gillard is the party's federal parliamentary leader and Prime Minister of Australia...
in 1929
Australian federal election, 1929
Federal elections were held in Australia on 12 October 1929. All 75 seats in the House of Representatives were up for election, with no Senate seats up for election, as a result of Billy Hughes and other rebel backbenchers crossing the floor over industrial relations legislation, depriving the...
(with Bruce losing his own seat), and Page went into opposition. In 1931 Joseph Lyons
Joseph Lyons
Joseph Aloysius Lyons, CH was an Australian politician. He was Labor Premier of Tasmania from 1923 to 1928 and a Minister in the James Scullin government from 1929 until his resignation from the Labor Party in March 1931...
was able to form a UAP
United Australia Party
The United Australia Party was an Australian political party that was founded in 1931 and dissolved in 1945. It was the political successor to the Nationalist Party of Australia and predecessor to the Liberal Party of Australia...
government without Country Party support. In 1934, however, the coalition was re-formed, and Page became Minister for Commerce
Minister for Agriculture, Fisheries and Forestry (Australia)
The current Australian Minister for Agriculture, Fisheries and Forestry is Senator the Hon Joe Ludwig.-Portfolio responsibilities:The minister administers his portfolio through the Department of Agriculture, Fisheries and Forestry, and its component bodies:...
. He was made a Knight Grand Cross of the Order of St Michael and St George
Order of St Michael and St George
The Most Distinguished Order of Saint Michael and Saint George is an order of chivalry founded on 28 April 1818 by George, Prince Regent, later George IV of the United Kingdom, while he was acting as Prince Regent for his father, George III....
(GCMG) in the New Year’s Day Honours of 1938. 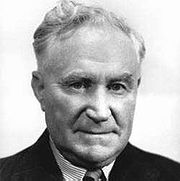 Page had been very close to Lyons, but he disliked Lyons's deputy, Robert Menzies
Robert Menzies
Sir Robert Gordon Menzies, , Australian politician, was the 12th and longest-serving Prime Minister of Australia....
, whom he charged publicly with having been disloyal to Lyons. When Menzies was elected UAP leader, Page refused to serve under him, and made an extraordinary personal attack on him in the House, accusing him not only of ministerial incompetence but of physical cowardice (for failing to enlist during World War I). His party soon rebelled, though, and Page was deposed as Country Party leader and replaced by Archie Cameron
Archie Cameron
Archie Galbraith Cameron , was an Australian politician. He was Leader of the Country Party 1939-40, and Speaker of the House of Representatives 1950-56.-Biography:...
.