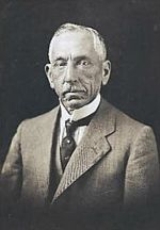 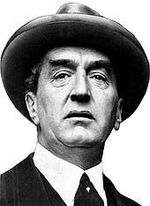 In October 1915 Labor Prime Minister Andrew Fisher
Andrew Fisher
Andrew Fisher was an Australian politician who served as the fifth Prime Minister on three separate occasions. Fisher's 1910-13 Labor ministry completed a vast legislative programme which made him, along with Protectionist Alfred Deakin, the founder of the statutory structure of the new nation...
retired and Hughes was chosen unanimously by the Labor caucus
Caucus
A caucus is a meeting of supporters or members of a political party or movement, especially in the United States and Canada. As the use of the term has been expanded the exact definition has come to vary among political cultures.-Origin of the term:...
to succeed him. He was a strong supporter of Australia's participation in World War I, and after a visit to Britain in 1916 he became convinced that conscription was necessary if Australia was to sustain its contribution to the war effort. The majority of his party, most notably Roman Catholics
Roman Catholic Church in Australia
The Catholic Church in Australia is part of the worldwide Catholic Church under the spiritual and administrative leadership of the Pope.Australia is a majority Christian but pluralistic society with no established religion. There are approximately 5.1 million Australian Catholics . Catholicism...
and trade union
Australian labour movement
The Australian labour movement has its origins in the early 19th century and includes both trade unions and political activity. At its broadest, the movement can be defined as encompassing the industrial wing, the unions in Australia, and the political wing, the Australian Labor Party and minor...
representatives, was bitterly opposed to this, especially in the wake of the British government's reprisals against the Irish Easter Uprising of 1916. In October Hughes held a plebiscite
Australian plebiscite, 1916
The 1916 Australian plebiscite was held on 28 October 1916. It was the first non-binding Australian plebiscite, and contained one question concerning Military Service....
to try to gain approval for conscription, but the plebiscite was narrowly defeated. Melbourne's Catholic Archbishop, Daniel Mannix
Daniel Mannix
Daniel Mannix was an Irish-born Australian Catholic bishop. Mannix was the Archbishop of Melbourne for 46 years and one of the most influential public figures in 20th century Australia....
, was his main opponent on the conscription issue. The defeat, however, did not deter Hughes, who continued to vigorously argue in favour of conscription. This produced a deep and bitter split within the Australian community, as well as within the members of his own party. The extent to which he engineered this has been hotly debated ever since, and was even at the time regarded as ironic by many in the Labor movement given Hughes' violent hostility to earlier Labor "rats" like Joseph Cook
Joseph Cook
Sir Joseph Cook, GCMG was an Australian politician and the sixth Prime Minister of Australia. Born as Joseph Cooke and working in the coal mines of Silverdale, Staffordshire during his early life, he emigrated to Lithgow, New South Wales during the late 1880s, and became General-Secretary of the...
.

On 15 September 1916 the NSW executive of the Political Labour League (the Labor Party organisation at the time) expelled Hughes from the Labor Party. When the Federal Parliamentary Labor caucus met on 14 November 1916, lengthy discussions ensued until Hughes walked out with 24 other Labor members and the remaining (43) members of Caucus then passed their motion of no confidence in the leadership, effectively expelling Hughes and the other members.

Hughes and his followers formed a minority Government (briefly using the title "National Labor"), with support from Cook and his Commonwealth Liberal Party
Commonwealth Liberal Party
The Commonwealth Liberal Party was a political movement active in Australia from 1909 to 1916, shortly after federation....
. As the war dragged on, Hughes began negotiations with Cook to turn their confidence-and-supply agreement into a formal party. That February, the two groups formally merged to form the Nationalist Party, with Hughes as leader. Although it was dominated by former Liberals, the presence of many former Labor men—many of whom had been among early leaders in that party—allowed the Nationalists to project an image of national unity.

In May 1917 the Nationalists won a huge electoral victory. At this election Hughes abandoned his working-class seat, and was elected for Bendigo
Division of Bendigo
The Division of Bendigo is an Australian Electoral Division in Victoria. The division was created in 1900 and was one of the original 75 divisions contested at the first federal election. It is named for the city of Bendigo...
in Victoria
Victoria (Australia)
Victoria is the second most populous state in Australia. Geographically the smallest mainland state, Victoria is bordered by New South Wales, South Australia, and Tasmania on Boundary Islet to the north, west and south respectively....
. Hughes had promised to resign if his Government did not win the power to conscript. A second plebiscite on conscription
Australian plebiscite, 1917
The 1917 Australian plebiscite was held on 20 December 1917. It contained one question.* Are you in favour of the proposal of the Commonwealth Government for reinforcing the Australian Imperial Force overseas?-The Plebiscite:...
was held in December 1917, but was again defeated, this time by a wider margin. Hughes, after receiving a vote of confidence in his leadership by his party, resigned as Prime Minister but, as there were no alternative candidates, the Governor-General, Sir Ronald Munro Ferguson, immediately re-commissioned him, thus allowing him to remain as Prime Minister while keeping his promise to resign.

Hughes and the Nationalists governed on their own until the elections of 1922, when the newly emerged Country Party
National Party of Australia
The National Party of Australia is an Australian political party.Traditionally representing graziers, farmers and rural voters generally, it began as the The Country Party, but adopted the name The National Country Party in 1975, changed to The National Party of Australia in 1982. The party is...
gained the balance of power
Balance of power (parliament)
In parliamentary politics, the term balance of power sometimes describes the pragmatic mechanism exercised by a minor political party or other grouping whose guaranteed support may enable an otherwise minority government to obtain and hold office...
in the House of Representatives
Australian House of Representatives
The House of Representatives is one of the two houses of the Parliament of Australia; it is the lower house; the upper house is the Senate. Members of Parliament serve for terms of approximately three years....
. The Nationalists could not govern without Country Party support. However, the Country Party had never liked Hughes' rural policy, and their leader, Earle Page
Earle Page
Sir Earle Christmas Grafton Page, GCMG, CH was the 11th Prime Minister of Australia, and is to date the second-longest serving federal parliamentarian in Australian history, with 41 years, 361 days in Parliament.-Early life:...
let it be known that he would not serve under him. Several of the more conservative elements of the Nationalist Party had only tolerated Hughes after the war, suspecting he was still a socialist at heart. Page's demand finally gave them an excuse to dump Hughes, and Hughes was forced to resign in January 1923. Former Treasurer Stanley Bruce
Stanley Bruce
Stanley Melbourne Bruce, 1st Viscount Bruce of Melbourne, CH, MC, FRS, PC , was an Australian politician and diplomat, and the eighth Prime Minister of Australia. He was the second Australian granted an hereditary peerage of the United Kingdom, but the first whose peerage was formally created...
was chosen as leader and formed a coalition government with the Country Party. The Bruce-Page government continued in office until 1929, when the embittered Hughes led a group of backbenchers to cross the floor on a vote on Bruce's plans to reform the industrial arbitration system. In the subsequent election
Australian federal election, 1929
Federal elections were held in Australia on 12 October 1929. All 75 seats in the House of Representatives were up for election, with no Senate seats up for election, as a result of Billy Hughes and other rebel backbenchers crossing the floor over industrial relations legislation, depriving the...
, the Coalition was heavily defeated, suffering what was at the time the second-worst defeat of a sitting government since Federation. Bruce even lost his own seat.

The organisation kept its name when its parent party became part of the UAP. Half the UAP members elected in the 1932 Victorian state election were Young Nationalists, almost trebling their parliamentary representation. In 1932 the Premier, Sir Stanley Argyle
Stanley Argyle
Sir Stanley Seymour Argyle KBE , Australian politician, was the 32nd Premier of Victoria. He was born in Kyneton, Victoria, the son of a grazier, and was educated at Brighton Grammar School and the University of Melbourne, where he graduated in medicine...
, included three of them in his eight person cabinet, with positions including Deputy Premier.