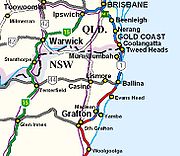 The city of Grafton is the commercial hub of the Clarence River
Clarence River (New South Wales)
The Clarence River is situated in northeastern New South Wales, Australia. The river originates on the watershed that marks the Queensland border. After flowing south and northeast for 394 km it then empties into the Pacific Ocean at Iluka/Yamba. On its journey it passes through the towns of...
Valley. Established in 1851, Grafton features many historic buildings and tree-lined streets. Located approximately 630 kilometres north of Sydney
Sydney
Sydney is the most populous city in Australia and the state capital of New South Wales. Sydney is located on Australia's south-east coast of the Tasman Sea. As of June 2010, the greater metropolitan area had an approximate population of 4.6 million people...
and 340 km south of Brisbane
Brisbane
Brisbane is the capital and most populous city in the Australian state of Queensland and the third most populous city in Australia. Brisbane's metropolitan area has a population of over 2 million, and the South East Queensland urban conurbation, centred around Brisbane, encompasses a population of...
, Grafton and the Clarence Valley can be reached by road, rail or air. At the 2006 census
Census in Australia
The Australian census is administered once every five years by the Australian Bureau of Statistics. The most recent census was conducted on 9 August 2011; the next will be conducted in 2016. Prior to the introduction of regular censuses in 1961, they had also been run in 1901, 1911, 1921, 1933,...
, Grafton had a population of 17,501 people.

Grafton, like many other settlements in the area, was first opened up to white settlement by the cedar-getters. An escaped convict, Richard Craig
Richard Craig (adventurer)
Richard Craig was a free settler in the colony of New South Wales, a convicted criminal, an escaped convict, and a pardoned convict who worked as a stockman and drover.-Early life:...
, 'discovered' the district in 1831. With the wealth of 'red gold' cedar just waiting for exploitation, he was given a pardon and one hundred pounds to bring a party of cedar-getters on the cutter 'Prince George' to the region. Word of such wealth to be had did not take long to spread and one of the arrivals was pioneer John Small on the 'Susan' in 1838, and he first occupied land on Woodford Island. 'The Settlement' (as the embryonic Grafton was then imaginatively named) was established shortly after.

In 1851, Governor FitzRoy
Charles Augustus FitzRoy
Sir Charles Augustus FitzRoy, KCH, KCB was a British military officer, politician and member of the aristocracy, who held governorships in several British colonies during the 19th century.-Family and peerage:...
officially named the town "Grafton", after his grandfather, the Duke of Grafton
Augustus FitzRoy, 3rd Duke of Grafton
Augustus Henry FitzRoy, 3rd Duke of Grafton, KG, PC , styled Earl of Euston between 1747 and 1757, was a British Whig statesman of the Georgian era...
, a former Prime Minister of the United Kingdom. Grafton was proclaimed a city in 1885. Local industries include, logging, beef cattle, fishing/prawning, sugar, manufacturing and tourism is a growing part of the local economy.

The town is also known for its double-decker road/railway bridge
Grafton Bridge, New South Wales
Grafton Bridge is a bascule bridge which spans the Clarence River in Grafton in New South Wales, Australia. Its upper level supports a two way road for traffic, and its lower level supports a rail bridge, a water main, and two footbridges on either side. The bascule span was operational until 1969...
, opened in 1932, completing the standard gauge rail connection between Sydney and Brisbane, and also forming a vital link for the Pacific Highway
Pacific Highway (Australia)
The Pacific Highway is a major transport route along part of the east coast of Australia and is part of Australia's national route 1.It is 960 km long and links Sydney, the capital of New South Wales, to Brisbane, the capital of Queensland, along the coast, via Gosford, Newcastle, Taree, Port...
. This bridge is a one of a kind and is a major feature on the Clarence River in Grafton.

Grafton is also known as the Jacaranda
Jacaranda
Jacaranda is a genus of 49 species of flowering plants in the family Bignoniaceae, native to tropical and subtropical regions of South America , Central America, Mexico, and the Caribbean. It is also found in Asia, especially in Nepal...
City, in reference to its tree-lined streets and annual Jacaranda Festival, held in October/November.

Grafton is also well known for the Grafton Cup horse race, held yearly on the second Thursday in July. A half day holiday is observed in Grafton for the Cup day.

Grafton is the birthplace of several renowned country music
Country music
Country music is a popular American musical style that began in the rural Southern United States in the 1920s. It takes its roots from Western cowboy and folk music...
players. Local artist, Troy Cassar-Daley
Troy Cassar-Daley
Troy Cassar-Daley is a multi-award-winning country musician from New South Wales, Australia.He released his first EP, "Dream Out Loud", in 1994 and was nominated for his first Golden Guitar for Best Male Vocalist the same year...
received four Golden Guitar awards in the 2006 Tamworth Country Music Awards
Tamworth Country Music Festival
The Tamworth Country Music Festival is an annual music festival held in Tamworth, New South Wales, Australia and is a celebration of Australian country music culture and heritage. The festival lasts for two weeks during late January and during this period the city of Tamworth comes alive, with...
– the largest and most prestigious country music awards in Australia. At the same awards event Samantha McClymont
Samantha McClymont
Samantha Kate McClymont is an Australian singer-songwriter. She is a member of the country music band The McClymonts with her sisters Brooke and Mollie.-Early life:...
, the 2005/2006 Grafton Jacaranda Queen and sister of Brooke McClymont
Brooke McClymont
Brooke Maree McClymont is an Australian singer and songwriter. She has written songs for Kate DeAraugo and Olivia Newton-John and been a support act for Troy Cassar-Daley and Ronan Keating...
, also received an award for her country music talent.

A vision of Grafton with its numerous brilliantly-flowered trees in bloom, is immortalised in Australian music culture in Cold Chisel
Cold Chisel
Cold Chisel is a rock band that originated in Adelaide, Australia. It is one of the most acclaimed Australian rock bands of all time, with a string of hits throughout the 1970s and 1980s and huge sales that continue to this day, although its success and acclaim was almost completely restricted to...
's song Flame Trees
Flame Trees
"Flame Trees" is a song by Australian pub rock band Cold Chisel from their 1984 album Twentieth Century. It is one of their best known songs, and was written by drummer Steve Prestwich and organist Don Walker...
.

Schaeffer House is a historic 1900 Federation house and contains the collection of the Clarence River Historical Society which was formed in 1931.

The Murwillumbah
Murwillumbah, New South Wales
Murwillumbah is a town of approximately 7,500 people in far north-eastern New South Wales, Australia in the Tweed Shire. It lies on the Tweed River, 848 km north-east of Sydney, 13 km south of the Queensland border and 132 km south of Brisbane. At the 2006 census, Murwillumbah had a...
– Byron Bay
Byron Bay, New South Wales
Byron Bay is a beachside town located in the far-northeastern corner of the state of New South Wales, Australia. It is located north of Sydney and south of Brisbane. Cape Byron, a headland adjacent to the town, is the easternmost point of mainland Australia. At the 2006 Census, the town had a...
– Lismore
Lismore, New South Wales
Lismore is a subtropical town in northeastern New South Wales, Australia. Lismore is the main population centre in the City of Lismore local government area. Lismore is a regional centre in the Northern Rivers region of the State.-History:...
railway (opened in 1894) was extended to Grafton in 1905; for details, see Murwillumbah railway line. The North Coast Line
North Coast railway line, New South Wales
The North Coast Line is the primary rail route in the Mid North Coast and Northern Rivers regions of New South Wales, and forms a major part of the Sydney-Brisbane rail corridor....
reached South Grafton from Sydney in 1915. Pending the opening of the combined road and rail bascule bridge
Bascule bridge
A bascule bridge is a moveable bridge with a counterweight that continuously balances the span, or "leaf," throughout the entire upward swing in providing clearance for boat traffic....
in 1932, Grafton had a train ferry
Train ferry
A train ferry is a ship designed to carry railway vehicles. Typically, one level of the ship is fitted with railway tracks, and the vessel has a door at the front and/or rear to give access to the wharves. In the United States, train ferries are sometimes referred to as "car ferries", as...
to connect the two railways. Clarence Valley Regional Airport
Clarence Valley Regional Airport
Clarence Valley Regional Airport is an airport in Grafton, New South Wales, Australia. -Airlines and destinations:*Regional Express -External links:*...
is the airport that services Grafton.

The daily newspaper of Grafton is The Daily Examiner
The Daily Examiner
The Daily Examiner is a daily newspaper serving Grafton, New South Wales, Australia. The newspaper is owned by APN News & Media.The Daily Examiner is circulated to Grafton, the Clarence Valley and surrounding areas from Woody Head in the north to Red Rock in the south.The circulation of The Daily...
, owned by media conglomerate Australian Provincial Newspapers (APN), part of the media empire controlled by Irish magnate Tony O'Reilly
Tony O'Reilly
Sir Anthony Joseph Francis O'Reilly is an Irish businessman and former international rugby union player. He is known for his involvement the Independent News & Media Group, which he led from 1973 to 2009, and as former CEO and Chairman of the H.J. Heinz Company. He was the leading shareholder of...
.

Pay television services are provided by Austar
Austar
Austar is an Australian telecommunications company. Its main business activity is Subscription Television but it is also involved with internet access and mobile phones...
.