Encyclopedia
The Drentsche Patrijshond is a versatile spaniel-type hunting dog
Hunting dog
A hunting dog refers to any dog who assists humans in hunting. There are several types of hunting dogs developed for various tasks. The major categories of hunting dogs include hounds, terriers, dachshunds, cur type dogs, and gun dogs...
from the Dutch
Netherlands
The Netherlands is a constituent country of the Kingdom of the Netherlands, located mainly in North-West Europe and with several islands in the Caribbean. Mainland Netherlands borders the North Sea to the north and west, Belgium to the south, and Germany to the east, and shares maritime borders...
province of Drenthe
Drenthe
Drenthe is a province of the Netherlands, located in the north-east of the country. The capital city is Assen. It is bordered by Overijssel to the south, Friesland to the west, Groningen to the north, and Germany to the east.-History:Drenthe, unlike many other parts of the Netherlands, has been a...
. Called the Dutch Partridge Dog (or "Drent" for Drenthe) in English, approximately 5,000 dogs are registered with the breed club in the Netherlands, and breed clubs operate in Belgium, Denmark, Scandinavia and North America. The Drentsche Patrijshond bears some resemblance to both spaniel
Spaniel
A spaniel is a type of gun dog. It is assumed spaniels originated from Spain as the word spaniel may be derived from Hispania or possibly from the French phrase "Chiens de l’Espagnol" . Spaniels were especially bred to flush game out of dense brush. By the late 17th century spaniels had become...
and setter
Setter
The setter is a type of gundog used most often for hunting game such as quail, pheasant, and grouse. A setter silently searches for game by scent. When prey is encountered the dog freezes rather than chasing after the game. Setters get their name from their distinctive stance; a sort of crouch...
type
Dog type
Dog types are broad categories of dogs based on function, with dogs identified primarily by specific function or style of work rather than by lineage or appearance....
s of dog. An excellent pointer and retriever
Retriever
A retriever is a type of gun dog that retrieves game for a hunter. Generally gun-dogs are divided into three major classifications: retrievers, flushing spaniels, and pointing breeds. Retrievers were bred primarily to retrieve birds or other prey and return them to the hunter without damage...
, this dog is often used to hunt fowl
Fowl
Fowl is a word for birds in general but usually refers to birds belonging to one of two biological orders, namely the gamefowl or landfowl and the waterfowl...
and adapts equally well to the field or marsh
Marsh
In geography, a marsh, or morass, is a type of wetland that is subject to frequent or continuous flood. Typically the water is shallow and features grasses, rushes, reeds, typhas, sedges, other herbaceous plants, and moss....
es.

Valid color is white with brown or orange markings. Mostly white with large brown plates (spots.) There is usually one plate that covers the backside above the tail. A mantle (large marking across the back) is permissible, but generally less desired. The coat is medium long, with feathers on the leg and longer hair on the front of the chest, giving the impression of a longer haired coat. The Drentsche Patrijshond is 55 to 63 cm (22 to 25 in). at the withers
Withers
The withers is the ridge between the shoulder blades of a four-legged animal. In many species it is the tallest point of the body, and in horses and dogs it is the standard place to measure the animal's height .-Horses:The withers in horses are formed by the dorsal spinal processes of roughly the...
. 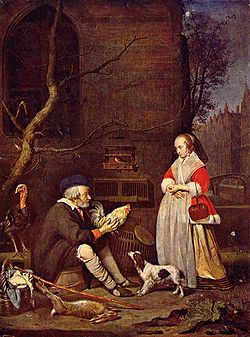 The origins of the Drentsche Patrijshond are in the 16th century, from the Spioenen (or Spanjoelen) which came to the Netherlands through France
France
The French Republic , The French Republic , The French Republic , (commonly known as France , is a unitary semi-presidential republic in Western Europe with several overseas territories and islands located on other continents and in the Indian, Pacific, and Atlantic oceans. Metropolitan France...
from Spain
Spain
Spain , officially the Kingdom of Spain languages]] under the European Charter for Regional or Minority Languages. In each of these, Spain's official name is as follows:;;;;;;), is a country and member state of the European Union located in southwestern Europe on the Iberian Peninsula...
, and is related to the Small Münsterländer
Small Munsterlander
The Small Munsterlander is a versatile hunting-pointing-retrieving dog breed that reached its current form in the area around Münster, Germany. The Large Munsterlander is from the same area, but was developed from different breeding stock and is not related as the names would suggest...
of Germany and the Epagneul Français of France . In the Netherlands, these dogs were called partridge dogs.

The presence of the partridge dogs had been visible for centuries, as in the 17th century painting The Hunter's Present, c. 1658-60, by Gabriel Metsu
Gabriel Metsu
Gabriël Metsu was a Dutch painter of history paintings, genre works and portraits.- Life :Metsu was the son of the Flemish painter Jacques Metsu , who lived most of his days at Leiden, and Jacomijntje Garniers, his third wife, whom he married in 1625. Jacomijntje was the widow of a painter with...
. In the painting, the partridge dog leans against the hunter's knee, as the man is handing a woman a partridge, which was a double entendre
Double entendre
A double entendre or adianoeta is a figure of speech in which a spoken phrase is devised to be understood in either of two ways. Often the first meaning is straightforward, while the second meaning is less so: often risqué or ironic....
at the time. The dog in The Hunter's Present is a very large, stocky dog that could possibly pull a cart
Dogcart (dog-drawn)
A dogcart is a cart pulled by one or more dogs. The traditional varieties are rare:* Dog carts pulled by a single dog were sometimes used by peddlers....
; showing the range of the early type
Dog type
Dog types are broad categories of dogs based on function, with dogs identified primarily by specific function or style of work rather than by lineage or appearance....
, a much smaller, lighter dog of the same type is shown in another painting by the same artist, The Poultry seller, 1662. This painting also involves a woman being offered a bird, regarded with suspicion by her dog.

The province of Drenthe three hundred years ago was unusual, in that it allowed the common gentry the right to hunt. The local mayor, the farmer, and landowners in general developed dogs to support their pursuit of various small game. Unlike many other hunting breeds, which were developed by, and for, the elite or nobility only to hunt, the Drentsche Patrijshond was expected to hunt all game, and also pull duty as watch dog, child playmate, etc. Some were even used to pull the dog-carts
Dogcart (dog-drawn)
A dogcart is a cart pulled by one or more dogs. The traditional varieties are rare:* Dog carts pulled by a single dog were sometimes used by peddlers....
of the day. For over 300 years, the Drentsche Patrijshond type has been an all-around dog.

Perfectly suited to the walk-up (upland
Upland hunting
Upland Hunting is an American term for a form of bird hunting in which the hunter pursues upland birds including quail, pheasant, grouse, prairie chicken, chukar, grey partridge, and others...
) hunter, the Drent is thorough, in order to find all the game on the smaller plots available in Drenthe. It hunts with good speed, within reach of the gun. As with most European versatile breeds, the Drentsche Patrijshond points and retrieves, and will hunt both birds and small mammals, including rabbit, hare and fox. Today, the Drent is a favorite gun dog
Gun dog
thumb|right|A group of Gun dogs as printed in Dogs of All Nations by W.E. Mason in 1915Gun dogs, also gundogs or bird dogs, are types of dogs developed to assist hunters in finding and retrieving game, usually birds. Gun dogs are divided into three primary types: Retrievers, flushing dogs, and...
throughout its native country of the Netherlands, with approximately 5,000 dogs registered with the breed club.

Though the breed shows a strong hunting instinct in the field, and can be quite driven, these dogs tend to be more relaxed in the home than many of the hunting breeds. They are strongly attached to family members, loyal, and of sweet disposition, particularly with children.

Happiest when working alongside a hunter, the Drentse enjoys the company of humans in the great outdoors. Several brisk turns around the park will satisfy it as well. Although it will come home and quietly assume its position on its bed, it should not be mistaken for a sedentary dog- the breed will suffer if insufficiently exercised.