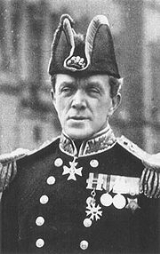 Encyclopedia
Admiral of the Fleet
Admiral of the Fleet
An admiral of the fleet is a military naval officer of the highest rank. In many nations the rank is reserved for wartime or ceremonial appointments...
Sir Frederick Charles Doveton Sturdee, 1st Baronet, GCB
Order of the Bath
The Most Honourable Order of the Bath is a British order of chivalry founded by George I on 18 May 1725. The name derives from the elaborate mediæval ceremony for creating a knight, which involved bathing as one of its elements. The knights so created were known as Knights of the Bath...
, KCMG
Order of St Michael and St George
The Most Distinguished Order of Saint Michael and Saint George is an order of chivalry founded on 28 April 1818 by George, Prince Regent, later George IV of the United Kingdom, while he was acting as Prince Regent for his father, George III....
, CVO
Royal Victorian Order
The Royal Victorian Order is a dynastic order of knighthood and a house order of chivalry recognising distinguished personal service to the order's Sovereign, the reigning monarch of the Commonwealth realms, any members of her family, or any of her viceroys...
(9 June 1859 – 7 May 1925) was a British
United Kingdom
The United Kingdom of Great Britain and Northern IrelandIn the United Kingdom and Dependencies, other languages have been officially recognised as legitimate autochthonous languages under the European Charter for Regional or Minority Languages...
admiral
Admiral
Admiral is the rank, or part of the name of the ranks, of the highest naval officers. It is usually considered a full admiral and above vice admiral and below admiral of the fleet . It is usually abbreviated to "Adm" or "ADM"...
.

Coming from a family of British mariners, and educated at the Royal Naval School at New Cross
New Cross
New Cross is a district and ward of the London Borough of Lewisham, England. It is situated 4 miles south-east of Charing Cross. The ward covered by London post town and the SE 14 postcode district. New Cross is near St Johns, Telegraph Hill, Nunhead, Peckham, Brockley, Deptford and Greenwich...
, Sturdee entered the Royal Navy in July 1871 as a cadet on the training ship Britannia
HMS Prince of Wales (1860)
HMS Prince of Wales was one of six 121-gun screw-propelled first-rate three-decker line-of-battle ships of the Royal Navy. She was launched on 25 January 1860...
, at the age of twelve years. After two years he became a midshipman and served in the Channel Squadron
Channel Fleet
The Channel Fleet was the Royal Navy formation of warships that defended the waters of the English Channel from 1690 to 1909.-History:The Channel Fleet dates back at least to 1690 when its role was to defend England against the French threat under the leadership of Edward Russell, 1st Earl of...
and the East India Station
East Indies Station
The East Indies Station was a formation of the British Royal Navy from 1865 to 1941.From 1831 to 1865 the East Indies and the China Station were a single command known as the East Indies and China Station...
. In June 1878, he was promoted to sub-lieutenant
Sub-Lieutenant
Sub-lieutenant is a military rank. It is normally a junior officer rank.In many navies, a sub-lieutenant is a naval commissioned or subordinate officer, ranking below a lieutenant. In the Royal Navy the rank of sub-lieutenant is equivalent to the rank of lieutenant in the British Army and of...
, and after two years at the naval gunnery school in Portsmouth
Portsmouth
Portsmouth is the second largest city in the ceremonial county of Hampshire on the south coast of England. Portsmouth is notable for being the United Kingdom's only island city; it is located mainly on Portsea Island...
, he became a lieutenant and left for the Mediterranean Fleet. He took part in the bombardment of Alexandria
Alexandria
Alexandria is the second-largest city of Egypt, with a population of 4.1 million, extending about along the coast of the Mediterranean Sea in the north central part of the country; it is also the largest city lying directly on the Mediterranean coast. It is Egypt's largest seaport, serving...
in 1882.

After completing a course on torpedo
Torpedo
The modern torpedo is a self-propelled missile weapon with an explosive warhead, launched above or below the water surface, propelled underwater towards a target, and designed to detonate either on contact with it or in proximity to it.The term torpedo was originally employed for...
es, at what is now he served as a torpedo officer on for three years before returning as an instructor. In June 1893 he was promoted to commander
Commander
Commander is a naval rank which is also sometimes used as a military title depending on the individual customs of a given military service. Commander is also used as a rank or title in some organizations outside of the armed forces, particularly in police and law enforcement.-Commander as a naval...
and transferred to the Admiralty
Admiralty
The Admiralty was formerly the authority in the Kingdom of England, and later in the United Kingdom, responsible for the command of the Royal Navy...
as Director of Naval Ordnance. At the end of 1897 he was sent to the Australian Station to command , where in 1899 it fell to him to manage the tensions with Germany
Germany
Germany , officially the Federal Republic of Germany , is a federal parliamentary republic in Europe. The country consists of 16 states while the capital and largest city is Berlin. Germany covers an area of 357,021 km2 and has a largely temperate seasonal climate...
and the USA over the Samoan Islands
Samoa
Samoa , officially the Independent State of Samoa, formerly known as Western Samoa is a country encompassing the western part of the Samoan Islands in the South Pacific Ocean. It became independent from New Zealand in 1962. The two main islands of Samoa are Upolu and one of the biggest islands in...
, earning him his promotion to captain
Captain (Royal Navy)
Captain is a senior officer rank of the Royal Navy. It ranks above Commander and below Commodore and has a NATO ranking code of OF-5. The rank is equivalent to a Colonel in the British Army or Royal Marines and to a Group Captain in the Royal Air Force. The rank of Group Captain is based on the...
. He returned to the Admiralty as assistant to the director of naval intelligence and in 1902 was appointed Chief Staff Officer of the Mediterranean Fleet in 1905. In 1906 he took command of and in 1907 he became Chief of Staff of the Channel Fleet. Promoted to rear-admiral in 1910, he became Rear Admiral commanding the First Battle Squadron of the Home Fleet. The following year he chaired the Submarine Committee of the Admiralty, and in 1912 took command of the cruiser
Cruiser
A cruiser is a type of warship. The term has been in use for several hundreds of years, and has had different meanings throughout this period...
s of the Home Fleet. Promoted to vice-admiral in 1913 he became Chief of War Staff at the Admiralty shortly before the First World War. The recall of Admiral John Fisher, to whom he had always been opposed, as First Sea Lord
First Sea Lord
The First Sea Lord is the professional head of the Royal Navy and the whole Naval Service; it was formerly known as First Naval Lord. He also holds the title of Chief of Naval Staff, and is known by the abbreviations 1SL/CNS...
seemed about to blight his career. 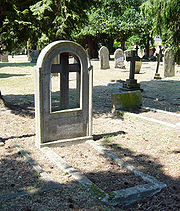 Nevertheless, after the defeat at Coronel
Battle of Coronel
The First World War naval Battle of Coronel took place on 1 November 1914 off the coast of central Chile near the city of Coronel. German Kaiserliche Marine forces led by Vice-Admiral Graf Maximilian von Spee met and defeated a Royal Navy squadron commanded by Rear-Admiral Sir Christopher...
, Fisher sent Sturdee to the South Atlantic
South Atlantic Station
The South Atlantic Station was one of the geographical divisions into which the British Royal Navy divided its worldwide responsibilities. It was formed from the former Cape of Good Hope Station.-History:...
at the head of a powerful squadron. On 8 December 1914, whilst coaling at Stanley
Stanley, Falkland Islands
Stanley is the capital and only true cityin the Falkland Islands. It is located on the isle of East Falkland, on a north-facing slope in one of the wettest parts of the islands. At the 2006 census, the city had a population of 2,115...
, he was surprised by the squadron of Graf Maximilian von Spee
Maximilian von Spee
Vice Admiral Maximilian Reichsgraf von Spee was a German admiral. Although he was born in Copenhagen, Denmark, the counts von Spee belonged to the prominent families of the Rhenish nobility. He joined the Kaiserliche Marine in 1878. In 1887–88 he commanded the Kamerun ports, in German West...
and the Battle of the Falkland Islands
Battle of the Falkland Islands
The Battle of the Falkland Islands was a British naval victory over the Imperial German Navy on 8 December 1914 during the First World War in the South Atlantic...
ensued. Von Spee, finding that he was engaged with a superior force, was forced to flee. In the course of the pursuit Sturdee's forces sank the entire German group, with the exception of the light cruiser Dresden, which was not hunted down until some months later. For this victory Sturdee was created baronet
Baronet
A baronet or the rare female equivalent, a baronetess , is the holder of a hereditary baronetcy awarded by the British Crown...
in January 1916. He later commanded the Fourth Battle Squadron at the Battle of Jutland
Battle of Jutland
The Battle of Jutland was a naval battle between the British Royal Navy's Grand Fleet and the Imperial German Navy's High Seas Fleet during the First World War. The battle was fought on 31 May and 1 June 1916 in the North Sea near Jutland, Denmark. It was the largest naval battle and the only...
, becoming admiral in 1917.

Sturdee retired to Camberley
Camberley
Camberley is a town in Surrey, England, situated 31 miles  southwest of central London, in the corridor between the M3 and M4 motorways. The town lies close to the borders of both Hampshire and Berkshire; the boundaries intersect on the western edge of the town where all three counties...
, in Surrey
Surrey
Surrey is a county in the South East of England and is one of the Home Counties. The county borders Greater London, Kent, East Sussex, West Sussex, Hampshire and Berkshire. The historic county town is Guildford. Surrey County Council sits at Kingston upon Thames, although this has been part of...
, and died there on 7 May 1925. He was buried in the churchyard of St. Peter's Church in nearby Frimley
Frimley
Frimley is a small English town situated 2 miles south of Camberley, in the extreme west of Surrey, adjacent to the border with Hampshire. It is about 31 miles west south-west of Central London. It is part of the Borough of Surrey Heath...
. His gravestone incorporates a cross made from the timbers of Nelson
Horatio Nelson, 1st Viscount Nelson
Horatio Nelson, 1st Viscount Nelson, 1st Duke of Bronté, KB was a flag officer famous for his service in the Royal Navy, particularly during the Napoleonic Wars. He was noted for his inspirational leadership and superb grasp of strategy and unconventional tactics, which resulted in a number of...
's ship, .

According to Anna Smith in her book "Johannesburg Street Names" (Juta, 1971), Sturdee Avenue in Rosebank, Johannesburg
Johannesburg
Johannesburg also known as Jozi, Jo'burg or Egoli, is the largest city in South Africa, by population. Johannesburg is the provincial capital of Gauteng, the wealthiest province in South Africa, having the largest economy of any metropolitan region in Sub-Saharan Africa...
(South Africa
South Africa
The Republic of South Africa is a country in southern Africa. Located at the southern tip of Africa, it is divided into nine provinces, with of coastline on the Atlantic and Indian oceans...
), is "believed that it commemorates Admiral Sir Frederick Charles Doveton Sturdee (1859–1925) of World Ward 1 fame. The Town Engineer in writing to the township-owners on 3 November 1919 stated that Sturdee was in the 'Falklands Battle'." 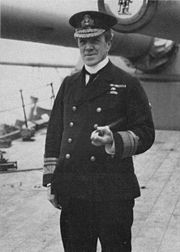