Encyclopedia
The States' Rights Democratic Party (usually called the Dixiecrats) was a short-lived segregationist
Racial segregation
Racial segregation is the separation of humans into racial groups in daily life. It may apply to activities such as eating in a restaurant, drinking from a water fountain, using a public toilet, attending school, going to the movies, or in the rental or purchase of a home...
political party in the United States
United States
The United States of America is a federal constitutional republic comprising fifty states and a federal district...
in 1948. It originated as a breakaway faction of the Democratic Party in 1948, determined to protect what they portrayed as the southern way of life
Racial segregation in the United States
Racial segregation in the United States, as a general term, included the racial segregation or hypersegregation of facilities, services, and opportunities such as housing, medical care, education, employment, and transportation along racial lines...
beset by an oppressive federal government, and supporters assumed control of the state Democratic parties in part or in full in several Southern states. The States' Rights Democratic Party opposed racial integration
Racial integration
Racial integration, or simply integration includes desegregation . In addition to desegregation, integration includes goals such as leveling barriers to association, creating equal opportunity regardless of race, and the development of a culture that draws on diverse traditions, rather than merely...
and wanted to retain Jim Crow laws and white supremacy
White supremacy
White supremacy is the belief, and promotion of the belief, that white people are superior to people of other racial backgrounds. The term is sometimes used specifically to describe a political ideology that advocates the social and political dominance by whites.White supremacy, as with racial...
in the face of possible federal intervention. Members were called Dixiecrats. (The term Dixiecrat is a portmanteau of Dixie
Dixie
Dixie is a nickname for the Southern United States.- Origin of the name :According to the Oxford English Dictionary, the origins of this nickname remain obscure. According to A Dictionary of Americanisms on Historical Principles , by Mitford M...
, referring to the Southern United States
Southern United States
The Southern United States—commonly referred to as the American South, Dixie, or simply the South—constitutes a large distinctive area in the southeastern and south-central United States...
, and Democrat.)

By the 1870s the South was heavily Democratic in national and presidential elections, apart from pockets of Republican strength. It was the "Solid South
Solid South
Solid South is the electoral support of the Southern United States for the Democratic Party candidates for nearly a century from 1877, the end of Reconstruction, to 1964, during the middle of the Civil Rights era....
". The social system was based on Jim Crow, a combination of legal and informal segregation that made blacks second-class citizens with little or no political power anywhere in the South.

In the 1930s, the New Deal
New Deal
The New Deal was a series of economic programs implemented in the United States between 1933 and 1936. They were passed by the U.S. Congress during the first term of President Franklin D. Roosevelt. The programs were Roosevelt's responses to the Great Depression, and focused on what historians call...
under Franklin Delano Roosevelt, a realignment
Realigning election
Realigning election are terms from political science and political history describing a dramatic change in the political system. Scholars frequently apply the term to American elections and occasionally to other countries...
occurred. Much of the Democratic Party in the South shifted towards economic intervention
Economic interventionism
Economic interventionism is an action taken by a government in a market economy or market-oriented mixed economy, beyond the basic regulation of fraud and enforcement of contracts, in an effort to affect its own economy...
. Civil rights for blacks was not on the New Deal agenda, as Southerners controlled the key positions of power in Congress. Jim Crow was indirectly challenged as two million blacks served in the military during World War II, receiving equal pay in segregated units, and equally entitled to veterans' benefits. The Republican Party, nominating Governor of New York Thomas E. Dewey in 1944 and 1948, supported civil rights legislation that the Southern Democrats in Congress almost unanimously opposed. 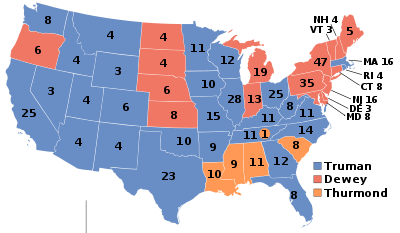 When Roosevelt died, the new president Harry Truman established a highly visible President's Committee on Civil Rights
President's Committee on Civil Rights
The President's Committee on Civil Rights was established by Executive Order 9808, which Harry Truman, who was then President of the United States, issued on December 5, 1946. The committee was instructed to investigate the status of civil rights in the country and propose measures to strengthen...
and ordered an end
Executive Order 9981
Executive Order 9981 is an executive order issued on July 26, 1948 by U.S. President Harry S. Truman. It expanded on Executive Order 8802 by establishing equality of treatment and opportunity in the Armed Services for people of all races, religions, or national origins."In 1947, Randolph, along...
to discrimination in the military in 1948. Additionally, the Democratic National Convention in 1948 adopted a plank proposed by Northern liberals led by Hubert Humphrey
Hubert Humphrey
Hubert Horatio Humphrey, Jr. , served under President Lyndon B. Johnson as the 38th Vice President of the United States. Humphrey twice served as a United States Senator from Minnesota, and served as Democratic Majority Whip. He was a founder of the Minnesota Democratic-Farmer-Labor Party and...
calling for civil rights; 35 southerners walked out. The move was on to remove Truman's name from the ballot in the South. This required a new party, which the Southern defectors chose to name the State's Rights Party, with its own nominee: South Carolina
South Carolina
South Carolina is a state in the Deep South of the United States that borders Georgia to the south, North Carolina to the north, and the Atlantic Ocean to the east. Originally part of the Province of Carolina, the Province of South Carolina was one of the 13 colonies that declared independence...
Governor J. Strom Thurmond
Strom Thurmond
James Strom Thurmond was an American politician who served as a United States Senator. He also ran for the Presidency of the United States in 1948 as the segregationist States Rights Democratic Party candidate, receiving 2.4% of the popular vote and 39 electoral votes...
. The Dixiecrats held their convention at Municipal Auditorium in Birmingham, Alabama
Birmingham, Alabama
Birmingham is the largest city in Alabama. The city is the county seat of Jefferson County. According to the 2010 United States Census, Birmingham had a population of 212,237. The Birmingham-Hoover Metropolitan Area, in estimate by the U.S...
, where they nominated Thurmond for president and Fielding L. Wright
Fielding L. Wright
Fielding Lewis Wright was a Democratic politician who served as Lieutenant Governor of Mississippi from 1944 to 1946, then as Governor after the incumbent, Thomas L. Bailey, died in office in 1946. Wright was elected Governor in his own right in 1947 and served a full four year term...
, governor of Mississippi
Mississippi
Mississippi is a U.S. state located in the Southern United States. Jackson is the state capital and largest city. The name of the state derives from the Mississippi River, which flows along its western boundary, whose name comes from the Ojibwe word misi-ziibi...
, for vice president. The Dixiecrats did not expect to win the presidency outright; rather, they thought that if they could win enough Southern states then they would have a good chance of forcing the election into the House of Representatives where they believed Southern bargaining power could determine the winner. To this end Dixiecrat leaders worked to have Thurmond-Wright declared the official Democratic ticket in Southern states. They succeeded in Alabama
Alabama
Alabama is a state located in the southeastern region of the United States. It is bordered by Tennessee to the north, Georgia to the east, Florida and the Gulf of Mexico to the south, and Mississippi to the west. Alabama ranks 30th in total land area and ranks second in the size of its inland...
, Louisiana
Louisiana
Louisiana is a state located in the southern region of the United States of America. Its capital is Baton Rouge and largest city is New Orleans. Louisiana is the only state in the U.S. with political subdivisions termed parishes, which are local governments equivalent to counties...
, Mississippi, and South Carolina. In other states, they were forced to run as a third-party ticket.

In Arkansas
Arkansas
Arkansas is a state located in the southern region of the United States. Its name is an Algonquian name of the Quapaw Indians. Arkansas shares borders with six states , and its eastern border is largely defined by the Mississippi River...
, Democratic gubernatorial nominee Sid McMath
Sid McMath
Sidney Sanders McMath was a decorated U.S. Marine, attorney and the 34th Governor of Arkansas who, in defiance of his state's political establishment, championed rapid rural electrification, massive highway and school construction, the building of the University of Arkansas for Medical Sciences,...
vigorously supported Truman in speeches across the state, much to the consternation of the sitting governor, Benjamin Travis Laney
Benjamin Travis Laney
Benjamin Travis Laney, Jr. , was the 33rd Governor of Arkansas, having served from 1945-1949.Laney was born in Camden, where he attended Ouachita County public schools but never graduated from high school. He was, however, admitted in 1915 to Hendrix College, a liberal arts institution in...
, an ardent Thurmond supporter. Laney later used McMath's pro-Truman stance against him in the 1950 gubernatorial election, but McMath won re-election handily.

Efforts by Dixiecrats to paint other Truman loyalists as turncoats generally failed, although the seeds of discontent were planted which in years to come took their toll on Southern moderates.

On election day 1948
United States presidential election, 1948
The United States presidential election of 1948 is considered by most historians as the greatest election upset in American history. Virtually every prediction indicated that incumbent President Harry S. Truman would be defeated by Republican Thomas E. Dewey. Truman won, overcoming a three-way...
, the Thurmond-Wright ticket carried the previously solid Democratic states
Solid South
Solid South is the electoral support of the Southern United States for the Democratic Party candidates for nearly a century from 1877, the end of Reconstruction, to 1964, during the middle of the Civil Rights era....
of Alabama, Louisiana, Mississippi, and South Carolina, receiving 1,169,021 popular votes and 39 electoral votes. Progressive Party
Progressive Party (United States, 1948)
The United States Progressive Party of 1948 was a left-wing political party that ran former Vice President Henry A. Wallace of Iowa for president and U.S. Senator Glen H. Taylor of Idaho for vice president in 1948.-Foundation:...
nominee Henry A. Wallace
Henry A. Wallace
Henry Agard Wallace was the 33rd Vice President of the United States , the Secretary of Agriculture , and the Secretary of Commerce . In the 1948 presidential election, Wallace was the nominee of the Progressive Party.-Early life:Henry A...
drew off a nearly equal number of popular votes (1,157,172) from the Democrats' left wing, although he did not carry any states. The split in the Democratic Party in the 1948 election had been expected to produce a victory by GOP nominee Dewey, but Truman defeated Dewey in an upset victory.

The States' Rights Democratic Party dissolved after the 1948 election, as Truman, the Democratic National Committee, and the New Deal Southern Democrats acted to ensure that the Dixiecrat movement would not return in 1952 presidential election. Some local diehards, such as Leander Perez
Leander Perez
Leander Henry Perez, Sr. , was the Democratic political boss of Plaquemines and St. Bernard parishes in southeastern Louisiana during the middle third of the 20th century. Officially, he served as a district judge, later as district attorney, and as president of the Plaquemines Parish Commission...
of Louisiana, attempted to keep it in existence in their districts.
Regardless of the power struggle within the Democratic Party concerning segregation policy, the South remained a strongly Democratic voting bloc for local, state, and federal Congressional elections, but not in presidential elections.