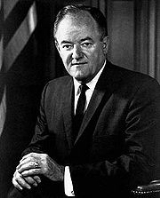 We can't use a double standard — there’s no room for double standards in American politics — for measuring our own and other people's policies. Our demands for democratic practices in other lands will be no more effective than the guarantee of those practices in our own country.

For all of us here, for the millions who have sent us, for the whole two billion members of the human family, our land is now, more than ever before, the last best hope on earth. And I know that we can, and I know that we shall began [sic] here the fuller and richer realization of that hope — that promise of a land where all men are truly free and equal, and each man uses his freedom and equality wisely well.