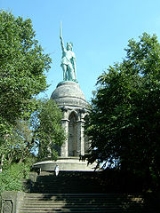 The Regierungsbezirk
Regierungsbezirk
In Germany, a Government District, in German: Regierungsbezirk – is a subdivision of certain federal states .They are above the Kreise, Landkreise, and kreisfreie Städte...
Detmold (ˈdɛtmɔlt) is one of the five Regierungsbezirke of North Rhine-Westphalia
North Rhine-Westphalia
North Rhine-Westphalia is the most populous state of Germany, with four of the country's ten largest cities. The state was formed in 1946 as a merger of the northern Rhineland and Westphalia, both formerly part of Prussia. Its capital is Düsseldorf. The state is currently run by a coalition of the...
, Germany
Germany
Germany , officially the Federal Republic of Germany , is a federal parliamentary republic in Europe. The country consists of 16 states while the capital and largest city is Berlin. Germany covers an area of 357,021 km2 and has a largely temperate seasonal climate...
, located in the north-east of the state. It is congruent with the administratively not existent area of Ostwestfalen-Lippe
Ostwestfalen-Lippe
Ostwestfalen-Lippe , abbreviation OWL, is a region in the German state of North Rhine-Westphalia, with a 2,000-years-old history and culture. Ostwestfalen-Lippe is the eastern part of the region of Westphalia, joined with the Lippe region. Translated to English, the name would be East...
(OWL) (East Westphalia
Westphalia
Westphalia is a region in Germany, centred on the cities of Arnsberg, Bielefeld, Dortmund, Minden and Münster.Westphalia is roughly the region between the rivers Rhine and Weser, located north and south of the Ruhr River. No exact definition of borders can be given, because the name "Westphalia"...
-Lippe
Lippe
Lippe is a Kreis in the east of North Rhine-Westphalia, Germany. Neighboring districts are Herford, Minden-Lübbecke, Höxter, Paderborn, Gütersloh, and district-free Bielefeld, which forms the region Ostwestfalen-Lippe....
).

The administration is located in Detmold
Detmold
Detmold is a city in North Rhine-Westphalia, Germany, with a population of about 74,000. It was the capital of the small Principality of Lippe from 1468 until 1918 and then of the Free State of Lippe until 1947...
in the district
Districts of Germany
The districts of Germany are known as , except in the states of North Rhine-Westphalia and Schleswig-Holstein where they are known simply as ....
of Lippe
Lippe
Lippe is a Kreis in the east of North Rhine-Westphalia, Germany. Neighboring districts are Herford, Minden-Lübbecke, Höxter, Paderborn, Gütersloh, and district-free Bielefeld, which forms the region Ostwestfalen-Lippe....
. Since 21 July 2005 Marianne Thomann-Stahl (FDP
Free Democratic Party (Germany)
The Free Democratic Party , abbreviated to FDP, is a centre-right classical liberal political party in Germany. It is led by Philipp Rösler and currently serves as the junior coalition partner to the Union in the German federal government...
) is the leader of the administration (Regierungspräsidentin).

The Regierungsbezirk consists of six districts with 69 municipalities, and of one district-free city.