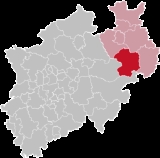 Paderborn was part of the Bishopric of Paderborn
Bishopric of Paderborn
The Archdiocese of Paderborn is an Archdiocese of the Latin Rite of the Roman Catholic Church in Germany; its seat is Paderborn. It was a diocese from its foundation in 799 until 1802, and again from 1821 until 1930. In 1930, it was promoted to an archdiocese...
until it was included into Prussia
Prussia
Prussia was a German kingdom and historic state originating out of the Duchy of Prussia and the Margraviate of Brandenburg. For centuries, the House of Hohenzollern ruled Prussia, successfully expanding its size by way of an unusually well-organized and effective army. Prussia shaped the history...
in 1802. After the Napoleonic wars
Napoleonic Wars
The Napoleonic Wars were a series of wars declared against Napoleon's French Empire by opposing coalitions that ran from 1803 to 1815. As a continuation of the wars sparked by the French Revolution of 1789, they revolutionised European armies and played out on an unprecedented scale, mainly due to...
when Prussia created the province Westphalia
Westphalia
Westphalia is a region in Germany, centred on the cities of Arnsberg, Bielefeld, Dortmund, Minden and Münster.Westphalia is roughly the region between the rivers Rhine and Weser, located north and south of the Ruhr River. No exact definition of borders can be given, because the name "Westphalia"...
it also created five districts roughly covering the area of the previous state - Brakel, Büren, Höxter, Paderborn and Warburg. In 1975 Paderborn and Büren districts were merged to the current Paderborn district. At the same time the towns and municipalities in the district were merged to form the today's ten towns municipalities.

The red cross in the top of the coat of arms symbolizes the clerical state Paderborn, the historic precursor of today's district. The wave line below stands for the rivers in the district, especially the Lippe River
Lippe River
The Lippe is a river in North Rhine-Westphalia, Germany. It is a right tributary of the Rhine and in length.The source is located at the edge of the Teutoburg Forest in Bad Lippspringe close to the city of Paderborn. It runs westward through Paderborn, Lippstadt and then along the northern edge...
. The symbol in bottom derives from the Lords of Büren.