Encyclopedia
Detmold (ˈdɛtmɔlt) is a city
City
A city is a relatively large and permanent settlement. Although there is no agreement on how a city is distinguished from a town within general English language meanings, many cities have a particular administrative, legal, or historical status based on local law.For example, in the U.S...
in North Rhine-Westphalia
North Rhine-Westphalia
North Rhine-Westphalia is the most populous state of Germany, with four of the country's ten largest cities. The state was formed in 1946 as a merger of the northern Rhineland and Westphalia, both formerly part of Prussia. Its capital is Düsseldorf. The state is currently run by a coalition of the...
, Germany
Germany
Germany , officially the Federal Republic of Germany , is a federal parliamentary republic in Europe. The country consists of 16 states while the capital and largest city is Berlin. Germany covers an area of 357,021 km2 and has a largely temperate seasonal climate...
, with a population of about 74,000. It was the capital of the small Principality of Lippe
Principality of Lippe
Lippe was a historical state in Germany. It was located between the Weser River and the southeast part of the Teutoburg forest.-History:...
from 1468 until 1918 and then of the Free State of Lippe
Free State of Lippe
The Free State of Lippe was a German state formed after the Principality of Lippe was abolished following the German Revolution of 1918.After the end of World War II, Lippe was restored from Nazi rule. This autonomy ended in January 1947 when British forces incorporated Lippe into the new German...
until 1947. Today it is the administrative center of the district of Lippe
Lippe
Lippe is a Kreis in the east of North Rhine-Westphalia, Germany. Neighboring districts are Herford, Minden-Lübbecke, Höxter, Paderborn, Gütersloh, and district-free Bielefeld, which forms the region Ostwestfalen-Lippe....
and of Regierungsbezirk Detmold
Detmold (region)
The Regierungsbezirk Detmold is one of the five Regierungsbezirke of North Rhine-Westphalia, Germany, located in the north-east of the state...
.

Detmold was first mentioned in 783 as Theotmalli, and in 1005 a Tietmelli or Theotmalli region (Gau) is referred to in documents. In 1263, Bernard III of Lippe fortified the settlement at the crossing of the trade route from Paderborn
Paderborn
Paderborn is a city in North Rhine-Westphalia, Germany, capital of the Paderborn district. The name of the city derives from the river Pader, which originates in more than 200 springs near Paderborn Cathedral, where St. Liborius is buried.-History:...
to Lemgo
Lemgo
Lemgo is a city in the Lippe district of North Rhine-Westphalia, Germany, with a population of c. 42,000.It was founded in the 12th century by Bernhard II at the crossroad of two merchant routes. Lemgo was a member of the Hanseatic League, a medieval trading association of free cities in several...
over the Werre River with stone walls and granted it a municipal charter. Its population was reported in 1305 as 305. Market rights granted in 1265 led to rapid economic development. Its defenses were greatly strengthened after severe damage had been inflicted on the town during the conflict with Soest in 1447. A major fire in 1547 destroyed more than 70 houses.

In 1550, Detmold became the permanent residence of Count Simon III of Lippe. The counts were elevated to princes in 1789, and Detmold remained the capital of the small Principality of Lippe
Principality of Lippe
Lippe was a historical state in Germany. It was located between the Weser River and the southeast part of the Teutoburg forest.-History:...
until the end of the First World War in 1918, when all princely states in Germany were abolished. 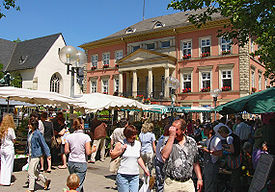 Detmold is twinned
Town twinning
Twin towns and sister cities are two of many terms used to describe the cooperative agreements between towns, cities, and even counties in geographically and politically distinct areas to promote cultural and commercial ties.- Terminology :...
with: Hasselt
Hasselt
Hasselt is a Belgian city and municipality, and capital of the Flemish province of Limburg...
, Belgium
Belgium
Belgium , officially the Kingdom of Belgium, is a federal state in Western Europe. It is a founding member of the European Union and hosts the EU's headquarters, and those of several other major international organisations such as NATO.Belgium is also a member of, or affiliated to, many...
Saint-Omer
Saint-Omer
Saint-Omer , a commune and sub-prefecture of the Pas-de-Calais department west-northwest of Lille on the railway to Calais. The town is named after Saint Audomar, who brought Christianity to the area....
, France
France
The French Republic , The French Republic , The French Republic , (commonly known as France , is a unitary semi-presidential republic in Western Europe with several overseas territories and islands located on other continents and in the Indian, Pacific, and Atlantic oceans. Metropolitan France...
Savonlinna
Savonlinna
Savonlinna is a town and a municipality of inhabitants in the southeast of Finland, in the heart of the Saimaa lake region. The Finnish name of the town means "Castle of Savonia" and the Swedish name means "Newcastle".- History :...
, Finland
Finland
Finland , officially the Republic of Finland, is a Nordic country situated in the Fennoscandian region of Northern Europe. It is bordered by Sweden in the west, Norway in the north and Russia in the east, while Estonia lies to its south across the Gulf of Finland.Around 5.4 million people reside...
Zeitz
Zeitz
Zeitz is a town in the Burgenlandkreis district, in Saxony-Anhalt, Germany. It is situated on the river Weiße Elster, in the middle of the triangle of the federal states Saxony-Anhalt, Thuringia and Saxony.-History:...
, Germany
Germany
Germany , officially the Federal Republic of Germany , is a federal parliamentary republic in Europe. The country consists of 16 states while the capital and largest city is Berlin. Germany covers an area of 357,021 km2 and has a largely temperate seasonal climate...
Kalithea, Greece
Greece
Greece , officially the Hellenic Republic , and historically Hellas or the Republic of Greece in English, is a country in southeastern Europe.... 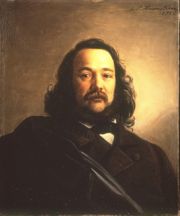 Well-known personalities born in Detmold include:

Important people who lived and worked in Detmold for a long time include:

Amongst the honorary citizens of Detmold, besides politicians are scientists and artists who have served in Detmold. The best-known are the builder of the Hermannsdenkmal
Hermannsdenkmal
The Hermannsdenkmal is a monument located in Ostwestfalen-Lippe in Germany in the Southern part of the Teutoburg Forest, which is southwest of Detmold in the district of Lippe...
at Porta Westfalica
Porta Westfalica
Porta Westfalica is a town in the district of Minden-Lübbecke, in North Rhine-Westphalia, Germany. The name “Porta Westfalica” is Latin and means “gate to Westphalia”. Coming from the north, the gorge is the entry to the region of Westphalia...
, Ernst von Bandel (1871), Reich Chancellor, Otto von Bismarck
Otto von Bismarck
Otto Eduard Leopold, Prince of Bismarck, Duke of Lauenburg , simply known as Otto von Bismarck, was a Prussian-German statesman whose actions unified Germany, made it a major player in world affairs, and created a balance of power that kept Europe at peace after 1871.As Minister President of...
(1895), and Reich President, Paul von Hindenburg
Paul von Hindenburg
Paul Ludwig Hans Anton von Beneckendorff und von Hindenburg , known universally as Paul von Hindenburg was a Prussian-German field marshal, statesman, and politician, and served as the second President of Germany from 1925 to 1934....
(1917).