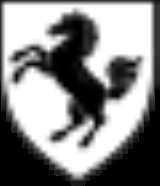 The region is also known as Wittekind's land, as the last fights of Wittekind's Saxon tribes against Charlemagne
Charlemagne
Charlemagne was King of the Franks from 768 and Emperor of the Romans from 800 to his death in 814. He expanded the Frankish kingdom into an empire that incorporated much of Western and Central Europe. During his reign, he conquered Italy and was crowned by Pope Leo III on 25 December 800...
took place here. He is believed to be buried in the town of Enger
Enger
Enger is a town in the Herford district, in North Rhine-Westphalia, Germany.-Geography:Enger is situated between the Teutoburg Forest and the Wiehen Hills, approx...
.

When the area became part of the Prussia
Prussia
Prussia was a German kingdom and historic state originating out of the Duchy of Prussia and the Margraviate of Brandenburg. For centuries, the House of Hohenzollern ruled Prussia, successfully expanding its size by way of an unusually well-organized and effective army. Prussia shaped the history...
n province Westphalia
Westphalia
Westphalia is a region in Germany, centred on the cities of Arnsberg, Bielefeld, Dortmund, Minden and Münster.Westphalia is roughly the region between the rivers Rhine and Weser, located north and south of the Ruhr River. No exact definition of borders can be given, because the name "Westphalia"...
, the first district Herford was created in 1816. In 1832 it was merged with the district Bünde
Bünde
Bünde is a town in the Herford district, in North Rhine-Westphalia, Germany.-Geography:Bünde is situated between Osnabrück , Hannover and Bielefeld .- Waterways :...
. In 1911, the city of Herford left the district; however, it lost its status as an independent urban district in 1969. The district reached its current size in 1973 when the municipality Uffeln, which was formerly in the district Minden, was merged into the city Vlotho
Vlotho
Vlotho is a town in the district of Herford, in North Rhine-Westphalia, Germany.-Geography:Vlotho is located along the Weser river, south of the Wiehengebirge, bordering on the Ravensberger Hügelland in the west, Lipperland in the south, and the Weserbergland in the east...
.

The district is located between the two mountain chains of the Wiehen Hills in the north and the Teutoburg Forest
Teutoburg Forest
The Teutoburg Forest is a range of low, forested mountains in the German states of Lower Saxony and North Rhine-Westphalia which used to be believed to be the scene of a decisive battle in AD 9...
in the south. To the northeast it is bounded by the Weser river.