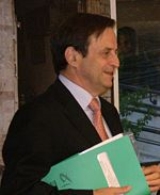 Born in Jerusalem towards the end of the Mandate era, Meridor is the son of Eliyahu Meridor
Eliyahu Meridor
Eliyahu Meridor was an Israeli politician who served as a member of the Knesset for Herut and Gahal from 1959 until his death in 1966.-Biography:...
, a longtime political associate of Menachem Begin
Menachem Begin
' was a politician, founder of Likud and the sixth Prime Minister of the State of Israel. Before independence, he was the leader of the Zionist militant group Irgun, the Revisionist breakaway from the larger Jewish paramilitary organization Haganah. He proclaimed a revolt, on 1 February 1944,...
in the Irgun
Irgun
The Irgun , or Irgun Zevai Leumi to give it its full title , was a Zionist paramilitary group that operated in Mandate Palestine between 1931 and 1948. It was an offshoot of the earlier and larger Jewish paramilitary organization haHaganah...
and Herut
Herut
Herut was the major right-wing political party in Israel from the 1940s until its formal merger into Likud in 1988, and an adherent of Revisionist Zionism.-History:...
(which he represented in the Knesset), and Ra'anana Meridor, an associate professor of Classics at the Hebrew University of Jerusalem
Hebrew University of Jerusalem
The Hebrew University of Jerusalem ; ; abbreviated HUJI) is Israel's second-oldest university, after the Technion – Israel Institute of Technology. The Hebrew University has three campuses in Jerusalem and one in Rehovot. The world's largest Jewish studies library is located on its Edmond J...
.

After serving as Cabinet Secretary
Cabinet Secretary
A Cabinet Secretary is almost always a senior official who provides services and advice to a Cabinet of Ministers. In many countries, the position can have considerably wider functions and powers, including general responsibility for the entire civil service...
between 1982 and 1984 (under Begin and Yitzhak Shamir
Yitzhak Shamir
' is a former Israeli politician, the seventh Prime Minister of Israel, in 1983–84 and 1986–92.-Biography:Icchak Jeziernicky was born in Ruzhany , Russian Empire . He studied at a Hebrew High School in Białystok, Poland. As a youth he joined Betar, the Revisionist Zionist youth movement...
), Meridor ran for the Knesset
Knesset
The Knesset is the unicameral legislature of Israel, located in Givat Ram, Jerusalem.-Role in Israeli Government :The legislative branch of the Israeli government, the Knesset passes all laws, elects the President and Prime Minister , approves the cabinet, and supervises the work of the government...
in the Likud list for the 1984 election
Israeli legislative election, 1984
Elections for the eleventh Knesset were held in Israel on 23 July 1984. Voter turnout was 78.8%. The results saw the Alignment return to being the largest party in the Knesset, a status it had lost in 1977...
. As a freshman member, he was appointed chairman of two legislative subcommittees. He was re-elected in 1988, and was appointed Minister of Justice
Justice Minister of Israel
The Justice Minister of Israel is the political head of the Israeli Ministry of Justice and a position in the Israeli cabinet. The current minister is Ya'akov Ne'eman, an independent who is not a member of the Knesset....
in Shamir's unity government of 1988–90 and in the right-wing cabinet of 1990–92. He retained his seat in the 1992
Israeli legislative election, 1992
Elections for the thirteenth Knesset were held in Israel on 23 June 1992. The result was a victory for the left, led by Yitzhak Rabin's Labor Party, though their win was at least partially due to several small right-wing parties narrowly failing to cross the electoral threshold and thus effectively...
and 1996 elections
Israeli legislative election, 1996
Elections for the fourteenth Knesset were held in Israel on 29 May 1996. Voter turnout was 79.3%.The 1996 elections included two new changes, both designed to increase the stability of the Knesset. First, the Prime Minister was to be elected on a separate ballot from the remaining members of the...
, and was appointed Minister of Finance by Binyamin Netanyahu in 1996.

After successive clashes with Netanyahu, Meridor left the cabinet in June 1997. His public image suffered during that period, when he was compared to Hamlet
Hamlet
The Tragical History of Hamlet, Prince of Denmark, or more simply Hamlet, is a tragedy by William Shakespeare, believed to have been written between 1599 and 1601...
(for his indecisiveness) and to a fraidy cat
Fraidy Cat
Fraidy cat is a slang term for a person who is very skittish or fearful.Fraidy Cat may refer to:*Fraidy Cat , a 1942 Tom and Jerry cartoon short...
on a popular TV show, "Hartzufim
Chartzufim
Chartzufim or HaChartzufim was an Israeli political satire television programme in the vein of Britain's Spitting Image. It ran from 1995 to 1999 on Channel 2....
".

In 1998, together with several other Likud and Labor Party members, he co-founded Israel in the Centre, which later became the Centre Party. He was elected as a Centre Party MK in the 1999 elections, and was appointed chairman of the Knesset's Foreign Affairs and Defense Committee
Foreign Affairs and Defense Committee
The Foreign Affairs and Defense Committee is a permanent Knesset committee which oversees key Foreign and Defense areas, including the drafting of legislation, supervision over related government ministries and the approval of their budgests...
. After Ariel Sharon
Ariel Sharon
Ariel Sharon is an Israeli statesman and retired general, who served as Israel’s 11th Prime Minister. He has been in a permanent vegetative state since suffering a stroke on 4 January 2006....
became Prime Minister in 2001, Meridor was made a Minister without Portfolio
Minister without Portfolio
A minister without portfolio is either a government minister with no specific responsibilities or a minister that does not head a particular ministry...
.

In the run-up to the 2006 elections, Meridor received offers by Labor and Yisrael Beiteinu, but he seemed to harbor hopes of being called to Kadima
Kadima
Kadima is a centrist and liberal political party in Israel. It was established on 24 November 2005 by moderates from Likud largely to support the issue of Ariel Sharon's unilateral disengagement plan, and was soon joined by like-minded Labor politicians...
's list. However, his inclusion was vetoed by Ariel Sharon's sons, Gilad and Omri Sharon
Omri Sharon
Omri Sharon is a former Israeli politician. Sharon served as a member of Knesset between 2003 and 2006. In 2006, he was convicted of fraud and sentenced to nine months in prison. He reported to Maasiyahu Prison to begin serving his sentence in 2008. He was released later the same year, having...
. He later rejoined Likud, and won seventeenth place on the party's list for the 2009 elections. He returned to the Knesset after the party won 27 seats.

In the Netanyahu cabinet formed after that election, Meridor was appointed Minister of Intelligence and Atomic Energy, and deputy Prime Minister http://www.knesset.gov.il/mk/eng/mk_eng.asp?mk_individual_id_t=88.

Meridor's wife Liora is a senior economist, who held several posts in the Bank of Israel
Bank of Israel
The Bank of Israel is the central bank of Israel. It is located in Kiryat HaMemshala in Israel's capital city of Jerusalem, with a branch office in Tel Aviv. The current governor is Stanley Fischer.-History:...
, the private sector, and government-sponsored panels. They have four children.