Encyclopedia
The Bank of Israel is the central bank
Central bank
A central bank, reserve bank, or monetary authority is a public institution that usually issues the currency, regulates the money supply, and controls the interest rates in a country. Central banks often also oversee the commercial banking system of their respective countries...
of Israel
Israel
The State of Israel is a parliamentary republic located in the Middle East, along the eastern shore of the Mediterranean Sea...
. It is located in Kiryat HaMemshala
Kiryat hamemshala
Kiryat HaMemshala , also known as Kiryat Ben-Gurion, is a complex of government buildings in the Givat Ram neighborhood of Jerusalem, Israel.-History:...
in Israel's capital city of Jerusalem, with a branch office in Tel Aviv
Tel Aviv
Tel Aviv , officially Tel Aviv-Yafo , is the second most populous city in Israel, with a population of 404,400 on a land area of . The city is located on the Israeli Mediterranean coastline in west-central Israel. It is the largest and most populous city in the metropolitan area of Gush Dan, with...
. The current governor is Stanley Fischer
Stanley Fischer
Stanley "Stan" Fischer is an American-Israeli economist and the current Governor of the Bank of Israel. He previously served as Chief Economist at the World Bank.-Biography:...
. 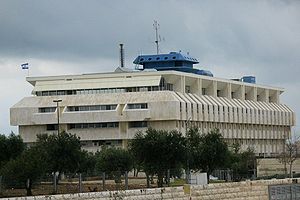 The Bank of Israel was founded on August 24, 1954, when the Knesset
Knesset
The Knesset is the unicameral legislature of Israel, located in Givat Ram, Jerusalem.-Role in Israeli Government :The legislative branch of the Israeli government, the Knesset passes all laws, elects the President and Prime Minister , approves the cabinet, and supervises the work of the government...
passed the Bank of Israel Act, which ceded the currency issuing and regulatory functions of the Ministry of Finance to the newly formed Bank. Control over foreign currency exchange was not given to the bank until 1978. The Bank was made completely independent in 1985 and since 1992, the Bank manages its monetary policy so as to meet the inflation
Inflation
In economics, inflation is a rise in the general level of prices of goods and services in an economy over a period of time.When the general price level rises, each unit of currency buys fewer goods and services. Consequently, inflation also reflects an erosion in the purchasing power of money – a...
target set by the Israeli government - which is today a range of between 1 and 3 percent per annum, considered as price stability. Additionally, the Bank manages the Foreign Exchange Reserves.


Governors of the Bank

The Bank of Israel is rather unusual when compared to other financial institutions in that the Governor alone decides whether to change rates or keep them on hold, rather than being voted upon by board members. Prior to this decision, discussions are held at two levels - first in a broad and then narrow forum.

The narrow forum consists only of the Governor, Deputy Governor and the departmental directors, and is far more discussion oriented. The directors present their opinions and recommendations, which the Governor questions and weighs before reaching his decision.

In March 2010, the Knesset approved a new Bank of Israel Law, which officially takes effect on June 1, 2010. The new law clearly defines the goals of the bank and gives the bank independence in determining its policy tools and the way of implementing them.

The law changes the framework in which major decisions are made in the Bank of Israel. Decisions regarding the rate of interest and monetary policy in general will be made by a Monetary Committee, while the managerial decisions will be approved by an Administrative Council. This brings the Bank of Israel more in line with the decision making procedures of other financial institutions.