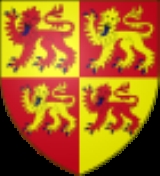 
Dafydd ap Llywelyn (c. 1215 – February 25, 1246) was Prince of Gwynedd
Kingdom of Gwynedd
Gwynedd was one petty kingdom of several Welsh successor states which emerged in 5th-century post-Roman Britain in the Early Middle Ages, and later evolved into a principality during the High Middle Ages. It was based on the former Brythonic tribal lands of the Ordovices, Gangani, and the...
from 1240 to 1246. He was for a time recognised as Prince of Wales
Prince of Wales
Prince of Wales is a title traditionally granted to the heir apparent to the reigning monarch of the United Kingdom of Great Britain and Northern Ireland and the 15 other independent Commonwealth realms...
.

Born at Castell Hen Blas, Coleshill, Bagillt
Bagillt
Bagillt is a small town near Holywell in Flintshire, North Wales. At the 2001 Census the population was recorded as 3,918.-History:http://stmarysbagillt.co.uk/...
in Flintshire
Flintshire
Flintshire is a county in north-east Wales. It borders Denbighshire, Wrexham and the English county of Cheshire. It is named after the historic county of Flintshire, which had notably different borders...
, he was the only son of Llywelyn the Great
Llywelyn the Great
Llywelyn the Great , full name Llywelyn ab Iorwerth, was a Prince of Gwynedd in north Wales and eventually de facto ruler over most of Wales...
by his wife, Joan
Joan, Lady of Wales
Joan, Princess of Wales and Lady of Snowdon was the wife of Llywelyn the Great, Prince of Wales and Gwynedd and effective ruler of most of Wales.-Early life:...
(daughter of King John
John of England
John , also known as John Lackland , was King of England from 6 April 1199 until his death...
). A clause in the agreement signed by Llywelyn and King John in August 1211 contains a clause that implies Llywelyn had not sired an heir by his wife Joan at that time; the date of Dafydd's birth is now believed to be between this date and early 1215. In his last years Llywelyn went to great lengths to have Dafydd accepted as his sole heir. By Welsh law
Welsh law
Welsh law was the system of law practised in Wales before the 16th century. According to tradition it was first codified by Hywel Dda during the period between 942 and 950 when he was king of most of Wales; as such it is usually called Cyfraith Hywel, the Law of Hywel, in Welsh...
Dafydd's older half brother, Gruffydd
Gruffydd ap Llywelyn Fawr
Gruffydd ap Llywelyn was the first born son of Llywelyn the Great . His mother Tangwystl probably died in childbirth.-Hostage:...
had a claim to consideration as Llywelyn's successor. Llywelyn had Dafydd recognised as his named heir by his uncle King Henry III of England
Henry III of England
Henry III was the son and successor of John as King of England, reigning for 56 years from 1216 until his death. His contemporaries knew him as Henry of Winchester. He was the first child king in England since the reign of Æthelred the Unready...
in 1220, and also had Dafydd's mother Joan declared legitimate by the Pope to strengthen Dafydd's position.

There was considerable support for Gruffydd in Gwynedd
Gwynedd
Gwynedd is a county in north-west Wales, named after the old Kingdom of Gwynedd. Although the second biggest in terms of geographical area, it is also one of the most sparsely populated...
. Although Dafydd lost one of his most important supporters when his mother died in 1237, he retained the support of Ednyfed Fychan
Ednyfed Fychan
Ednyfed Fychan , full name Ednyfed Fychan ap Cynwrig, was a Welsh warrior who became seneschal to the Kingdom of Gwynedd in Northern Wales, serving Llywelyn the Great and his son Dafydd ap Llywelyn...
, the Seneschal of Gwynedd and the wielder of great political influence. Llywelyn suffered a paralytic stroke in 1237, and Dafydd took an increasing role in government. Dafydd ruled Gwynedd following his father's death in 1240.

Although King Henry III of England
Henry III of England
Henry III was the son and successor of John as King of England, reigning for 56 years from 1216 until his death. His contemporaries knew him as Henry of Winchester. He was the first child king in England since the reign of Æthelred the Unready...
had accepted his claim to rule Gwynedd, he was not disposed to allow him to retain his father's conquests outside Gwynedd. As the diplomatic situation deteriorated, Dafydd began to explore the possibility of allying with others against Henry, and is known to have sent ambassadors to the court of Louis IX
Louis IX
Louis IX may refer to:* Louis IX of France .* Louis IX, Duke of Bavaria "the Rich" * Louis IX, Landgrave of Hesse-Darmstadt ....
of France. In August 1241, however, the King invaded Gwynedd, and after a short campaign, Dafydd was forced to submit. Under the terms of the Treaty of Gwerneigron
Treaty of Gwerneigron
Treaty of Gwerneigron was a peace treaty signed by Henry III, king of England and Dafydd ap Llywelyn, prince of Wales of the House of Gwynedd, on 29 August 1241. The treaty brought to an end Henry's invasion of Wales begun earlier that month....
, he had to give up all his lands outside Gwynedd, and also to hand over to the King his half brother Gruffydd whom he had been keeping a prisoner. Henry thereby gained what could have been a useful weapon against Dafydd, with the possibility of setting Gruffydd up as a rival to Dafydd in Gwynedd, but Gruffydd died trying to escape from the Tower of London
Tower of London
Her Majesty's Royal Palace and Fortress, more commonly known as the Tower of London, is a historic castle on the north bank of the River Thames in central London, England. It lies within the London Borough of Tower Hamlets, separated from the eastern edge of the City of London by the open space...
by climbing down a knotted sheet, and fell to his death in March 1244.

This freed Dafydd's hands, and he entered into an alliance with other Welsh princes to attack English possessions in Wales. Dafydd enjoyed several successes in the north; by March 1245 Dafydd had recovered the castle of Mold
Mold, Flintshire
Mold is a town in Flintshire, North Wales, on the River Alyn. It is the administrative seat of Flintshire County Council, and was also the county town of Clwyd from 1974 to 1996...
along with his former possessions in modern-day Flintshire
Flintshire
Flintshire is a county in north-east Wales. It borders Denbighshire, Wrexham and the English county of Cheshire. It is named after the historic county of Flintshire, which had notably different borders...
, and it is possible that the castle of Dyserth
Dyserth
Dyserth is a village in Denbighshire, Wales. Population : 2,566 . Its main features are the extensive quarrying remains, its waterfalls, railway line , and mountain ....
also fell to his men in the summer. In August 1245 King Henry again invaded Gwynedd, but his army suffered a defeat in a narrow pass by Dafydd's men. Undaunted, Henry proceeded as far as the river Conwy, and began building a new castle at Deganwy
Deganwy
Deganwy is a village in Conwy County Borough in Wales with a population of 3,700. It is in a more English-speaking region of North Wales, with only 1 in 4 residents speaking Welsh as a first language...
.

Dafydd also began diplomacy with Pope Innocent IV
Pope Innocent IV
Pope Innocent IV , born Sinibaldo Fieschi, was pope from June 25, 1243 until his death in 1254.-Early life:...
, the result of which was a recognition by the Vatican of his right to rule over north Wales. After a flurry of diplomatic activity by Henry, the decision was reversed in 1245. Savage fighting continued at Deganwy until Henry, some of whose supplies had been captured by the Welsh, ran short of provisions. A truce was agreed and Henry's army withdrew in the autumn. The truce remained in effect throughout the winter, but the war was effectively ended by the sudden death of Dafydd in the royal home at Abergwyngregyn
Abergwyngregyn
Abergwyngregyn is a village of historical note in Gwynedd, a county and principal area in Wales. Under its historic name of Aber Garth Celyn it was the seat of Llywelyn ap Gruffudd....
, in February 1246. He was buried with his father at the abbey of Aberconwy
Aberconwy Abbey
Aberconwy Abbey was a Cistercian foundation at Conwy, later transferred to Maenan near Llanrwst and in the 13th century was the most important abbey in North Wales....
. The writer of Brut y Tywysogyon described him as 'tarian Cymru' - the shield of Wales. The poet Dafydd Benfras
Dafydd Benfras
Dafydd Benfras was a Welsh language court poet regarded by Saunders Lewis and others as one of the greatest of the 'Poets of the Princes' ....
composed an elegy in his honour.

Since Dafydd's marriage to Isabella de Braose
Isabella de Braose
Isabella, Princess of Wales and Lady of Snowdon was the eldest daughter of William de Braose, Lord of Abergavenny, and his wife Eva Marshal...
, daughter of William de Braose, had failed to produce an heir (though some early modern genealogists record him as having sired sons, including Dafydd
Dafydd ap Dafydd ap Llywelyn
According to early modern genealogist Lewys Dwnn, Dafydd ap Llywelyn ap Dafydd was the illegitimate son of Dafydd ap Llywelyn, Prince of Wales and King of Gwynedd between 1240-1246. He is considered the ancestor of the Prys or Price of Esgairweddan family, who bore the royal arms of Gwynedd as...
) the two elder sons of Gruffydd, Llywelyn ap Gruffydd
Llywelyn the Last
Llywelyn ap Gruffydd or Llywelyn Ein Llyw Olaf , sometimes rendered as Llywelyn II, was the last prince of an independent Wales before its conquest by Edward I of England....
and Owain ap Gruffydd
Owain Goch ap Gruffydd
Owain ap Gruffudd, , , was brother to Llywelyn the Last and Dafydd ap Gruffudd and, for a brief period in the late 1240s and early 1250s, ruler of part of the Kingdom of Gwynedd .- Lineage :Owain was the eldest son of Gruffudd ap Llywelyn and the grandson of Llywelyn the Great...
, divided Gwynedd between them and continued the war with King Henry until April 1247, when Llywelyn and Owain met the King at Woodstock and came to terms with him at the cost of the loss of much territory. The pair would continue to rule over Gwynedd jointly until Llywelyn's victory over Owain at the battle of Bryn Derwin in 1255.
The source of this article is wikipedia, the free encyclopedia.  The text of this article is licensed under the GFDL.