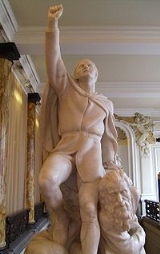 
Llywelyn ap Gruffydd or Llywelyn Ein Llyw Olaf ('Llywelyn, Our Last Leader') (c. 1223 – 11 December 1282), sometimes rendered as Llywelyn II, was the last prince of an independent Wales
Wales
Wales is a country that is part of the United Kingdom and the island of Great Britain, bordered by England to its east and the Atlantic Ocean and Irish Sea to its west. It has a population of three million, and a total area of 20,779 km²...
before its conquest by Edward I of England
Edward I of England
Edward I , also known as Edward Longshanks and the Hammer of the Scots, was King of England from 1272 to 1307. The first son of Henry III, Edward was involved early in the political intrigues of his father's reign, which included an outright rebellion by the English barons...
.
Llywelyn was the second of the four sons of Gruffydd
Gruffydd ap Llywelyn Fawr
Gruffydd ap Llywelyn was the first born son of Llywelyn the Great . His mother Tangwystl probably died in childbirth.-Hostage:...
, the eldest son of Llywelyn the Great
Llywelyn the Great
Llywelyn the Great , full name Llywelyn ab Iorwerth, was a Prince of Gwynedd in north Wales and eventually de facto ruler over most of Wales...
, and Senena ferch Rhodri. The eldest was Owain Goch ap Gruffydd
Owain Goch ap Gruffydd
Owain ap Gruffudd, , , was brother to Llywelyn the Last and Dafydd ap Gruffudd and, for a brief period in the late 1240s and early 1250s, ruler of part of the Kingdom of Gwynedd .- Lineage :Owain was the eldest son of Gruffudd ap Llywelyn and the grandson of Llywelyn the Great...
and Llywelyn had two younger brothers, Dafydd ap Gruffydd
Dafydd ap Gruffydd
Dafydd ap Gruffydd was Prince of Wales from 11 December 1282 until his execution on 3 October 1283 by King Edward I of England...
and Rhodri ap Gruffydd
Rhodri ap Gruffudd
Rhodri ap Gruffudd was the third or fourth son of Gruffydd ap Llywelyn Fawr. He was the younger brother of both Llywelyn the Last of Gwynedd, Prince of Wales) and of Owain Goch ap Gruffydd...
.