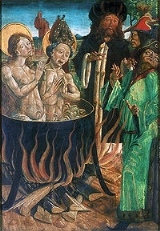 Encyclopedia
Saints Cyprian and Justina are honored in the Catholic Church, Eastern Orthodox Church
Eastern Orthodox Church
The Orthodox Church, officially called the Orthodox Catholic Church and commonly referred to as the Eastern Orthodox Church, is the second largest Christian denomination in the world, with an estimated 300 million adherents mainly in the countries of Belarus, Bulgaria, Cyprus, Georgia, Greece,...
and Oriental Orthodoxy
Oriental Orthodoxy
Oriental Orthodoxy is the faith of those Eastern Christian Churches that recognize only three ecumenical councils — the First Council of Nicaea, the First Council of Constantinople and the First Council of Ephesus. They rejected the dogmatic definitions of the Council of Chalcedon...
as Christians of Antioch, Pisidia
Antioch, Pisidia
Antioch in Pisidia – alternatively Antiochia in Pisidia or Pisidian Antioch and in Roman Empire, Latin: Antiochia Caesareia or Antiochia Caesaria – is a city in the Turkish Lakes Region, which is at the crossroads of the Mediterranean, Aegean and Central Anatolian regions, and formerly...
who in 304, during the persecution of Diocletian
Diocletian
Diocletian |latinized]] upon his accession to Diocletian . c. 22 December 244  – 3 December 311), was a Roman Emperor from 284 to 305....
, suffered martyrdom at Nicomedia
Nicomedia
Nicomedia was an ancient city in what is now Turkey, founded in 712/11 BC as a Megarian colony and was originally known as Astacus . After being destroyed by Lysimachus, it was rebuilt by Nicomedes I of Bithynia in 264 BC under the name of Nicomedia, and has ever since been one of the most...
(modern day İzmit
Izmit
İzmit is a city in Turkey, administrative center of Kocaeli Province as well as the Kocaeli Metropolitan Municipality. It is located at the Gulf of İzmit in the Sea of Marmara, about east of Istanbul, on the northwestern part of Anatolia. The city center has a population of 294.875...
, Turkey
Turkey
Turkey , known officially as the Republic of Turkey , is a Eurasian country located in Western Asia and in East Thrace in Southeastern Europe...
) on September 26, the date of their feast.

The outline of the legend or allegory which is found, with diffuse descriptions and dialogues, in the "Symeon Metaphrastes
Symeon Metaphrastes
Symeon the Metaphrast was the author of the 10 volume medieval Greek menologion, or collection of saint's lives. He lived in the second half of the 10th century...
," and was made the subject of a poem by Empress Aelia Eudocia
Aelia Eudocia
Aelia Eudocia Augusta was the wife of Theodosius II, and a prominent historical figure in understanding the rise of Christianity during the beginning of the Byzantine Empire. Eudocia lived in a world where Greek paganism and Christianity were still coming together...
goes thus :

Cyprian was a pagan magician of Antioch who had dealing with demons. By their aid he sought to bring St. Justina, a Christian virgin, to ruin; but she foiled the threefold attacks of the devils by the sign of the cross. Brought to despair, Cyprian made the sign of the cross himself and in this way was freed from the toils of Satan
Satan
Satan , "the opposer", is the title of various entities, both human and divine, who challenge the faith of humans in the Hebrew Bible...
. He was received into the Church, was made pre-eminent by miraculous gifts, and became in succession deacon
Deacon
Deacon is a ministry in the Christian Church that is generally associated with service of some kind, but which varies among theological and denominational traditions...
, priest
Priest
A priest is a person authorized to perform the sacred rites of a religion, especially as a mediatory agent between humans and deities. They also have the authority or power to administer religious rites; in particular, rites of sacrifice to, and propitiation of, a deity or deities...
, and finally bishop
Bishop
A bishop is an ordained or consecrated member of the Christian clergy who is generally entrusted with a position of authority and oversight. Within the Catholic Church, Eastern Orthodox, Oriental Orthodox Churches, in the Assyrian Church of the East, in the Independent Catholic Churches, and in the...
, while Justina became the head of a convent
Convent
A convent is either a community of priests, religious brothers, religious sisters, or nuns, or the building used by the community, particularly in the Roman Catholic Church and in the Anglican Communion...
.

During the Diocletian persecution, both were seized and taken to Damascus
Damascus
Damascus , commonly known in Syria as Al Sham , and as the City of Jasmine , is the capital and the second largest city of Syria after Aleppo, both are part of the country's 14 governorates. In addition to being one of the oldest continuously inhabited cities in the world, Damascus is a major...
where they were shockingly torture
Torture
Torture is the act of inflicting severe pain as a means of punishment, revenge, forcing information or a confession, or simply as an act of cruelty. Throughout history, torture has often been used as a method of political re-education, interrogation, punishment, and coercion...
d. As their faith never wavered they were brought before Diocletian at Nicomedia, where at his command they were beheaded
Decapitation
Decapitation is the separation of the head from the body. Beheading typically refers to the act of intentional decapitation, e.g., as a means of murder or execution; it may be accomplished, for example, with an axe, sword, knife, wire, or by other more sophisticated means such as a guillotine...
on the bank of the river Gallus
Gallus
Gallus may refer to:People* several ancient Romans; see Gallus * Gaius Cornelius Gallus , Roman poet, orator and politician *Saint Gall , 7th century...
. The same fate befell a Christian, Theoctistus, who had come to Cyprian and had embraced him.

After the bodies of the saints had lain unburied for six days they were taken by Christian sailor
Sailor
A sailor, mariner, or seaman is a person who navigates water-borne vessels or assists in their operation, maintenance, or service. The term can apply to professional mariners, military personnel, and recreational sailors as well as a plethora of other uses...
s to Rome
Rome
Rome is the capital of Italy and the country's largest and most populated city and comune, with over 2.7 million residents in . The city is located in the central-western portion of the Italian Peninsula, on the Tiber River within the Lazio region of Italy.Rome's history spans two and a half...
where they were interred on the estate of a noble lady named Rufina and later were entombed in Constantine's basilica
Basilica
The Latin word basilica , was originally used to describe a Roman public building, usually located in the forum of a Roman town. Public basilicas began to appear in Hellenistic cities in the 2nd century BC.The term was also applied to buildings used for religious purposes...
. 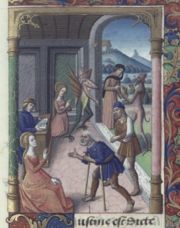 The story, however, must have arisen as early as the fourth century, as it is mentioned both by St. Gregory Nazianzen and Prudentius
Prudentius
Aurelius Prudentius Clemens was a Roman Christian poet, born in the Roman province of Tarraconensis in 348. He probably died in Spain, as well, some time after 405, possibly around 413...
; both, nevertheless, have confounded Cyprian with St. Cyprian of Carthage, a mistake often repeated.

The legend is given in Greek and Latin
Latin
Latin is an Italic language originally spoken in Latium and Ancient Rome. It, along with most European languages, is a descendant of the ancient Proto-Indo-European language. Although it is considered a dead language, a number of scholars and members of the Christian clergy speak it fluently, and...
in Acta SS. September, VII. Ancient Syriac and Ethiopic versions of it have been published.

There is even a book, The Great Book of Saint Cyprian
The Great Book of Saint Cyprian
The Great Book of Saint Cyprian is a book that deals with the occult. The book is written in Portuguese and Spanish and has been published in several editions with varying titles.-Authorship:...
, full of prayers and spells, which is widely sold in the Portuguese and Spanish speaking world. Similarly, Cyprianus
Cyprianus
Cyprianus is a name given in Scandinavian traditions of folk magic to the "black book" : a grimoire or manuscript collection of spells; and by extension to the magical tradition that these spells form a part of...
is a popular name for a grimoire
Grimoire
A grimoire is a textbook of magic. Such books typically include instructions on how to create magical objects like talismans and amulets, how to perform magical spells, charms and divination and also how to summon or invoke supernatural entities such as angels, spirits, and demons...
in Scandinavian folklore.