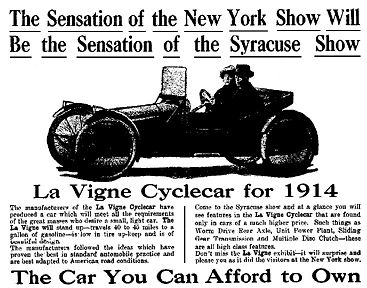 Cyclecars were small, generally inexpensive cars manufactured mainly between 1910 and the late 1920s.

Cyclecars were propelled by single cylinder, V-twin or more rarely four cylinder engines, often air cooled. Sometimes these had been originally used in motorcycle
Motorcycle
A motorcycle is a single-track, two-wheeled motor vehicle. Motorcycles vary considerably depending on the task for which they are designed, such as long distance travel, navigating congested urban traffic, cruising, sport and racing, or off-road conditions.Motorcycles are one of the most...
s and other components from this source such as gearboxes were also employed. Cyclecars were half way between motorcycles and cars and were fitted with lightweight bodies, sometimes in a tandem two-seater configuration and could be primitive with minimal comfort and weather protection. They used various layouts and means of transmitting the engine power to the wheels, such as belt drive
Belt (mechanical)
A belt is a loop of flexible material used to link two or more rotating shafts mechanically. Belts may be used as a source of motion, to transmit power efficiently, or to track relative movement. Belts are looped over pulleys. In a two pulley system, the belt can either drive the pulleys in the...
or chain drive
Chain drive
Chain drive is a way of transmitting mechanical power from one place to another. It is often used to convey power to the wheels of a vehicle, particularly bicycles and motorcycles...
often to one rear wheel only to avoid having to provide a differential.

The rise of cyclecars was a direct result of reduced taxation both for registration and annual licences of lightweight small engined cars. In France, for example, a car was classed for reduced rates if it weighed less than 350 kg (772 lb).

On 14 December 1912, at a meeting of the Federation Internationale des Clubs Moto Cycliste, it was formally decided that there should be an international classification of cyclecars to be accepted by the United Kingdom, Canada, United States, France, Holland, Belgium, Italy, Austria and Germany. It was also decided to establish two classes of cyclecars, as follows;

All cyclecars were to have clutches and change-speed gears. This requirement could be fulfilled by even the simplest devices such as provision for slipping the belt on the pulley to act as a clutch, and varying of the pulley diameter to change the gear ratio.

From 1898 to 1910, automobile
Automobile
An automobile, autocar, motor car or car is a wheeled motor vehicle used for transporting passengers, which also carries its own engine or motor...
production quickly expanded. Light cars of that era were commonly known as voiturette
Voiturette
Voiturette is a word mostly used to describe a miniature automobile; however, it has several nuanced meanings, depending largely on the usage date.-History:...
s. The smaller cyclecars appeared around 1910 with a boom shortly before the outbreak of World War I
World War I
World War I , which was predominantly called the World War or the Great War from its occurrence until 1939, and the First World War or World War I thereafter, was a major war centred in Europe that began on 28 July 1914 and lasted until 11 November 1918...
.

The first successful cyclecars were Bédélia
Bédélia
thumb|Bédélia from 1910 in 1975 at the NürburgringBédélia was the archetype of the French cyclecars....
of France
France
The French Republic , The French Republic , The French Republic , (commonly known as France , is a unitary semi-presidential republic in Western Europe with several overseas territories and islands located on other continents and in the Indian, Pacific, and Atlantic oceans. Metropolitan France...
and G.N.
GN (car)
thumb|right|200px|Richard Scaldwell's JAP-engined GN Grand Prix special at the VSCC SeeRed race meeting, Donington Park, September 2007. The GN has a 5.1 litre V8 aero-engine shoehorned into its lightweight cyclecar frame....
from Britain.

Some cyclecars such as Amilcar
Amilcar
The Amilcar was a French automobile manufactured from 1921 to 1940.The first offering was a small cyclecar; designed by Jules Salomon and Edmond Moyet, it bore a striking resemblance to the pre-war Le Zèbre. Next was the 903cc CC, which was available in two further versions; the CS was a sport...
, Major or Salmson
Salmson
Salmson was a French engineering company, initially in the automobile and aeroplane manufacturing area,turning to pump manufacturing in the 1960s.-History:...
of France
France
The French Republic , The French Republic , The French Republic , (commonly known as France , is a unitary semi-presidential republic in Western Europe with several overseas territories and islands located on other continents and in the Indian, Pacific, and Atlantic oceans. Metropolitan France...
had good enough performance and handling to be regarded as sports cars.

Races dedicated for cyclecars were also run with the first event of this kind organised by the Automobile Club de France in 1913 and a Cyclecar GP at Le Mans
Le Mans
Le Mans is a city in France, located on the Sarthe River. Traditionally the capital of the province of Maine, it is now the capital of the Sarthe department and the seat of the Roman Catholic diocese of Le Mans. Le Mans is a part of the Pays de la Loire region.Its inhabitants are called Manceaux...
in 1920.

By the early 1920s, the days of the cyclecar were numbered. Mass producers, such as Ford
Ford Motor Company
Ford Motor Company is an American multinational automaker based in Dearborn, Michigan, a suburb of Detroit. The automaker was founded by Henry Ford and incorporated on June 16, 1903. In addition to the Ford and Lincoln brands, Ford also owns a small stake in Mazda in Japan and Aston Martin in the UK...
, were able to reduce their prices to undercut those of the usually small cyclecar makers. Similar affordable cars were offered in Europe such as the Citroën 5CV
Citroën Type C
The Citroën Type C was a light car made by the French Citroën car company between 1922 and 1926 with almost 81,000 units being made. The car was originally called the Type C but was updated to the C2 in 1924 which was in turn superseded by the slightly longer C3 in 1925...
, Austin 7
Austin 7
The Austin 7 was a car produced from 1922 through to 1939 in the United Kingdom by the Austin Motor Company. Nicknamed the "Baby Austin", it was one of the most popular cars ever produced for the British market, and sold well abroad...
or Morris Cowley
Morris Cowley
Morris Cowley was a name given to various cars produced by the Morris Motor Company from 1915 to 1958.-Morris Cowley :The original Cowley, introduced in 1915, was a cheaper version of the first Morris Oxford and featured the same "Bullnose" radiator. To reduce the price many components were bought...
.

The cyclecar boom was over. The majority of cyclecar manufacturers closed down. Some companies such as Chater-Lea
Chater-Lea
Chater-Lea was a British bicycle, car and motor cycle maker with a nine-storey factory in Banner Street in the City of London and, from 1928, premises at Letchworth, Hertfordshire. It was founded by William Chater-Lea in 1900 to make bicycle components. It made cars between 1907 and 1922 and...
survived by returning to the manufacture of motorcycles.

After World War II
World War II
World War II, or the Second World War , was a global conflict lasting from 1939 to 1945, involving most of the world's nations—including all of the great powers—eventually forming two opposing military alliances: the Allies and the Axis...
, small, economic cars were again in demand and a new set of manufacturers appeared. The cyclecar name did not reappear however and the cars were called microcar
Microcar
A microcar is the smallest automobile classification usually applied to standard small car . Such small cars were generally referred to as cyclecars until the 1940s. More recent models are also called bubblecars due to their egg-shaped appearance.-Definition:The definition of a microcar has varied...
s by enthusiasts and bubble car
Bubble car
Bubble car is a subjective term used for some small, economical automobiles, usually produced in the 1950s and 1960s.- Varieties :The Messerschmitt KR175 and KR200, and the FMR Tg500, had aircraft-style bubble canopies, giving rise to the term bubble car to refer to all these post-war microcars...
s by the general population.