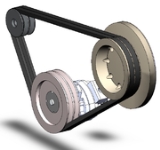 Overview
A belt is a loop of flexible material used to link two or more rotating shafts mechanically. Belts may be used as a source of motion, to transmit power
Transmission (mechanics)
A machine consists of a power source and a power transmission system, which provides controlled application of the power. Merriam-Webster defines transmission as: an assembly of parts including the speed-changing gears and the propeller shaft by which the power is transmitted from an engine to a...
efficiently, or to track relative movement. Belts are looped over pulley
Pulley
A pulley, also called a sheave or a drum, is a mechanism composed of a wheel on an axle or shaft that may have a groove between two flanges around its circumference. A rope, cable, belt, or chain usually runs over the wheel and inside the groove, if present...
s. In a two pulley system, the belt can either drive the pulleys in the same direction, or the belt may be crossed, so that the direction of the shafts is opposite. As a source of motion, a conveyor belt
Conveyor belt
A conveyor belt consists of two or more pulleys, with a continuous loop of material - the conveyor belt - that rotates about them. One or both of the pulleys are powered, moving the belt and the material on the belt forward. The powered pulley is called the drive pulley while the unpowered pulley...
is one application where the belt is adapted to continually carry a load between two points.
Belts are the cheapest utility for power transmission between shafts that may not be axially aligned.

Doing a belt paper for school-what does the letter sizing represent? A B C D-cannot find this info anywhere. All belt websites are just for sales.
More
x