The first offering was a small cyclecar
Cyclecar
Cyclecars were small, generally inexpensive cars manufactured mainly between 1910 and the late 1920s.-General description:Cyclecars were propelled by single cylinder, V-twin or more rarely four cylinder engines, often air cooled. Sometimes these had been originally used in motorcycles and other...
; designed by Jules Salomon and Edmond Moyet, it bore a striking resemblance to the pre-war Le Zèbre
Le Zèbre
Le Zèbre is a French make of car built between 1909 and 1931 in Puteaux, Seine. The company was founded by Jules Salomon who had been with Georges Richard with finance from Jacques Bizet, son of Georges Bizet the composer....
. Next was the 903cc CC, which was available in two further versions; the CS was a sport version, while the C4 was a family car. The side valve
SV
-Geography:* El Salvador, ISO 3166-1 country code* Schuylkill Valley, a school district in Pennsylvania, United States* Sierra Vista, a small city in the South-Eastern corner of Arizona, United States* South Vietnam* Silicon Valley-Organizations:...
engine had splash lubrication, and came with a three speed gearbox. The most famous model of all was the CGS "Grand Sport" of 1924; this featured a 1074 cc sv engine and four-wheel brakes. This in turn evolved into the more sporty CGSS "Grand Sport Surbaissé". These models were built under license in Germany
Germany
Germany , officially the Federal Republic of Germany , is a federal parliamentary republic in Europe. The country consists of 16 states while the capital and largest city is Berlin. Germany covers an area of 357,021 km2 and has a largely temperate seasonal climate...
(as the Pluto) and in Austria
Austria
Austria , officially the Republic of Austria , is a landlocked country of roughly 8.4 million people in Central Europe. It is bordered by the Czech Republic and Germany to the north, Slovakia and Hungary to the east, Slovenia and Italy to the south, and Switzerland and Liechtenstein to the...
(as the Grofri
Grofri
Grofri was the brand of cars manufactured in Austria from 1924 to 1927 under the licence of the French Amilcar. SV 903 cc or 1074 cc four-cylinder engines were used in these sporting cyclecars. Racing versions were also made, some of them with Roots superchargers....
) and in Italy
Italy
Italy , officially the Italian Republic languages]] under the European Charter for Regional or Minority Languages. In each of these, Italy's official name is as follows:;;;;;;;;), is a unitary parliamentary republic in South-Central Europe. To the north it borders France, Switzerland, Austria and...
(as Amilcar Italiana
Amilcar Italiana
Amilcar Italiana manufactured some French Amilcar automobile models in Italy from 1925 to 1928 under licence granted in 1925 to Compagnia Generale Automobili S.A.,of Rome to build cyclecars and in 1927 to Societa Industriale Lombardo Veneta Automobili of Verona....
). The marque entered automobile racing in the mid-1920s with a batch of supercharged dohc 1100 cc six cylinder cars that used a roller bearing crankshaft
Crankshaft
The crankshaft, sometimes casually abbreviated to crank, is the part of an engine which translates reciprocating linear piston motion into rotation...
in the full racing version; these vehicles were also available with plain bearings, driven by famous pilote André Morel. The company also offered a light touring car
Touring car
A touring car, or tourer, is an open car seating five or more. Touring cars may have two or four doors. Often, the belt line is lowered in the front doors to give the car a more sportive character. They were often fitted with a folding roof and side curtains. Engines on early models were either in...
; called the "M-Type", it featured a sv 1200 cc engine and was launched in 1928. It was followed by the M2, M3, and M4 versions. 1928 also saw the manufacture of a straight eight, which was built with an ohc 2-liter engine. This, the C8, proved unreliable, and soon disappeared. In the late 1930s Amilcar introduced two new models; one was the 14cv, which used a four cylinder Delahaye
Delahaye
Delahaye automobile manufacturing company was started by Emile Delahaye in 1894, in Tours, France. His first cars were belt-driven, with single- or twin-cylinder engines. In 1900, Delahaye left the company.-History:...
engine. In 1937 the company merged with Hotchkiss
Hotchkiss et Cie
Société Anonyme des Anciens Etablissements Hotchkiss et Cie was a French arms and car company established by United States engineer Benjamin B. Hotchkiss, who was born in Watertown, Connecticut. He moved to France and set up a factory, first at Viviez near Rodez in 1867, then at Saint-Denis near...
. The next model was the front wheel drive Amilcar Compound
Amilcar Compound
The Amilcar Compound is a front wheel drive car with unitary body/chassis introduced shortly before World War II by Amilcar after their takeover by Hotchkiss...
, quite advanced in design for its era, featuring a monocoque
Monocoque
Monocoque is a construction technique that supports structural load by using an object's external skin, as opposed to using an internal frame or truss that is then covered with a non-load-bearing skin or coachwork...
frame made of a light alloy
Alloy
An alloy is a mixture or metallic solid solution composed of two or more elements. Complete solid solution alloys give single solid phase microstructure, while partial solutions give two or more phases that may or may not be homogeneous in distribution, depending on thermal history...
and independent suspension
Independent suspension
Independent suspension is a broad term for any automobile suspension system that allows each wheel on the same axle to move vertically independently of each other. This is contrasted with a beam axle, live axle or deDion axle system in which the wheels are linked – movement on one side affects...
all around. For an engine it had an ohv four-cylinder of 1185 cc.
Production of the Amilcar was not resumed after World War II
World War II
World War II, or the Second World War , was a global conflict lasting from 1939 to 1945, involving most of the world's nations—including all of the great powers—eventually forming two opposing military alliances: the Allies and the Axis...
. 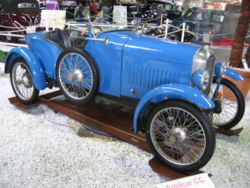 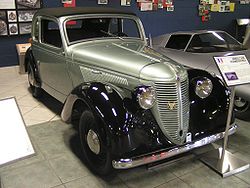