Cueca (ˈkweka) is a family of musical styles and associated dances from Chile
Chile
Chile ,officially the Republic of Chile , is a country in South America occupying a long, narrow coastal strip between the Andes mountains to the east and the Pacific Ocean to the west. It borders Peru to the north, Bolivia to the northeast, Argentina to the east, and the Drake Passage in the far...
, Bolivia
Bolivia
Bolivia officially known as Plurinational State of Bolivia , is a landlocked country in central South America. It is the poorest country in South America...
, Peru
Peru
Peru , officially the Republic of Peru , is a country in western South America. It is bordered on the north by Ecuador and Colombia, on the east by Brazil, on the southeast by Bolivia, on the south by Chile, and on the west by the Pacific Ocean....
, and Argentina
Argentina
Argentina , officially the Argentine Republic , is the second largest country in South America by land area, after Brazil. It is constituted as a federation of 23 provinces and an autonomous city, Buenos Aires...
. In Chile, the cueca holds the status of national dance, where it was officially selected on September 18, 1979. 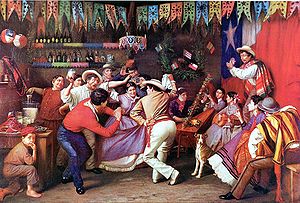 Another theory is that Cueca originated in the early 19th century bordellos of South America, as a pas de deux facilitating partner finding.
The usual interpretation of this courting dance is zoomorphic: it tries to reenact the courting ritual of a rooster
Rooster
A rooster, also known as a cockerel, cock or chanticleer, is a male chicken with the female being called a hen. Immature male chickens of less than a year's age are called cockerels...
and a hen
Chicken
The chicken is a domesticated fowl, a subspecies of the Red Junglefowl. As one of the most common and widespread domestic animals, and with a population of more than 24 billion in 2003, there are more chickens in the world than any other species of bird...
. The male displays a quite enthusiastic and at times even aggressive attitude while attempting to court the female, but the dance often finishes with the man kneeling on one knee, with the woman placing her foot triumphantly on his raised knee.

The clothing worn during the cueca dance is very traditional Chilean clothes. The men in the dance wear the huaso's hat, shirts, flannel poncho, riding pants and boots, short jacket, riding boots, and spurs. Women wore flowered dresses with an apron. (spotlightonchile.com) The dance of the cueca is done with a sense of the rooster and the chicken. The man approaches the woman and offers his arm, then the women accompanies him and they walk around the room. They then face each other and hold their handkerchief in the air, and being to dance. They never touch, but still maintain contact through facial expressions and movements. The white handkerchief must be waved; this writer has seen Chileans using paper handkerchieves from a box rather than dance the cueca without one.(spotlightonchile.com)

The basic structure of the cueca is that it is a compound meter in 6/8 or 3/4 and is divided into three sections.

Some differences can be noticed depending on geographical location. There are three distinct variants in addition to the traditional cueca:

Currently, the cueca is mainly danced in the countryside, and performed throughout Chile each year during the national holidays
Fiestas Patrias (Chile)
The Fiestas Patrias of Chile consists of two days:*September 18, in commemoration of the proclamation of the First Governing Body of 1810, and marking the beginning of the Chilean independence process....
in September. Dancing competitions of cueca are popular around that time of year.

In Bolivia there are lots of different Cueca styles according to the region: Cueca Paceña, Cueca Cochabambina, Cueca Chuquisaqueña, Cueca Tarijeña, Cueca Potosina y Cueca Chaqueña. What they have in common is their rhythm, but they differ quite a lot in velocity, costumes and style. The Cueca styles of La Paz
La Paz
Nuestra Señora de La Paz is the administrative capital of Bolivia, as well as the departmental capital of the La Paz Department, and the second largest city in the country after Santa Cruz de la Sierra...
, Potosí
Potosí
Potosí is a city and the capital of the department of Potosí in Bolivia. It is one of the highest cities in the world by elevation at a nominal . and it was the location of the Spanish colonial mint, now the National Mint of Bolivia...
and Sucre
Sucre
Sucre, also known historically as Charcas, La Plata and Chuquisaca is the constitutional capital of Bolivia and the capital of the department of Chuquisaca. Located in the south-central part of the country, Sucre lies at an elevation of 2750m...
are the elegant ones, whereas in Cochabamba
Cochabamba
Cochabamba is a city in central Bolivia, located in a valley bearing the same name in the Andes mountain range. It is the capital of the Cochabamba Department and is the fourth largest city in Bolivia with an urban population of 608,276 and a metropolitan population of more than 1,000,000 people...
and Tarija
Tarija, Bolivia
Tarija or San Bernardo de la Frontera de Tarixa is a city in southern Bolivia. Founded in 1574, Tarija is both the capital and largest city within the Tarija Department, with an airport offering regular service to primary Bolivian cities, as well as a regional bus terminal with domestic and...
the style is much more lively.In Bolivia, it is usually called "Cuequita Boliviana"
The source of this article is wikipedia, the free encyclopedia.  The text of this article is licensed under the GFDL.