Crossing the T or Capping the T is a classic naval warfare
Naval warfare
Naval warfare is combat in and on seas, oceans, or any other major bodies of water such as large lakes and wide rivers.-History:Mankind has fought battles on the sea for more than 3,000 years. Land warfare would seem, initially, to be irrelevant and entirely removed from warfare on the open ocean,...
tactic attempted from the late 19th to mid 20th century, in which a line of warship
Warship
A warship is a ship that is built and primarily intended for combat. Warships are usually built in a completely different way from merchant ships. As well as being armed, warships are designed to withstand damage and are usually faster and more maneuvrable than merchant ships...
s crossed in front of a line of enemy ships, allowing the crossing line to bring all their guns to bear while receiving fire from only the forward guns of the enemy.

It became possible to bring all of a ship's main guns to bear only in the late 19th and the early 20th centuries with the advent of steam-powered battleships with rotating gun turrets, which were able to move faster and turn quicker than sailing ships, which had fixed guns facing sideways. The tactic became largely obsolete with the introduction of missile
Missile
Though a missile may be any thrown or launched object, it colloquially almost always refers to a self-propelled guided weapon system.-Etymology:The word missile comes from the Latin verb mittere, meaning "to send"...
s and aircraft
Aircraft
An aircraft is a vehicle that is able to fly by gaining support from the air, or, in general, the atmosphere of a planet. An aircraft counters the force of gravity by using either static lift or by using the dynamic lift of an airfoil, or in a few cases the downward thrust from jet engines.Although...
as long-range strikes are not dependent on the direction the ships are facing.

When going into battle, ships would assume a battle line formation called "line astern", in which one vessel followed another in one or more parallel lines. This allowed each ship to fire over wide arcs without lofting salvos
Salvo
A salvo is the simultaneous discharge of artillery or firearms including the firing of guns either to hit a target or to perform a salute.Troops armed with muzzleloaders required time in which to refill their arms with gun powder and shot...
of projectiles
Shell (projectile)
A shell is a payload-carrying projectile, which, as opposed to shot, contains an explosive or other filling, though modern usage sometimes includes large solid projectiles properly termed shot . Solid shot may contain a pyrotechnic compound if a tracer or spotting charge is used...
over friendly vessels. Each ship in the line generally engaged its opposite number in the enemy battle line which moved in a parallel
Parallel (geometry)
Parallelism is a term in geometry and in everyday life that refers to a property in Euclidean space of two or more lines or planes, or a combination of these. The assumed existence and properties of parallel lines are the basis of Euclid's parallel postulate. Two lines in a plane that do not...
course. 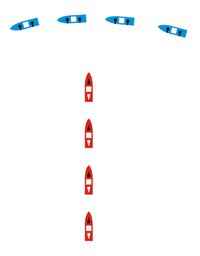 However, moving ahead of the enemy line on a perpendicular
Perpendicular
In geometry, two lines or planes are considered perpendicular to each other if they form congruent adjacent angles . The term may be used as a noun or adjective...
course (crossing the T) enabled a ship to launch salvoes at the same target with both the forward and rear turrets, maximizing the chances for a hit. It also made ranging error less critical for the ship doing the crossing, while simultaneously more critical for the ship being crossed. In military terms, this is known as enfilade
Enfilade and defilade
Enfilade and defilade are concepts in military tactics used to describe a military formation's exposure to enemy fire. A formation or position is "in enfilade" if weapons fire can be directed along its longest axis. A unit or position is "in defilade" if it uses natural or artificial obstacles to...
fire. The tactic, designed for heavily armed and armored battleships, was used with varying degrees of success with more lightly armed and armored cruiser
Cruiser
A cruiser is a type of warship. The term has been in use for several hundreds of years, and has had different meanings throughout this period...
s and heavy cruiser
Heavy cruiser
The heavy cruiser was a type of cruiser, a naval warship designed for long range, high speed and an armament of naval guns roughly 203mm calibre . The heavy cruiser can be seen as a lineage of ship design from 1915 until 1945, although the term 'heavy cruiser' only came into formal use in 1930...
s.

Advances in gun manufacture and fire-control system
Fire-control system
A fire-control system is a number of components working together, usually a gun data computer, a director, and radar, which is designed to assist a weapon system in hitting its target. It performs the same task as a human gunner firing a weapon, but attempts to do so faster and more...
s allowed engagements at increasingly long range, from approximately 6,000 yards (5.5 km) at the Battle of Tsushima
Battle of Tsushima
The Battle of Tsushima , commonly known as the “Sea of Japan Naval Battle” in Japan and the “Battle of Tsushima Strait”, was the major naval battle fought between Russia and Japan during the Russo-Japanese War...
in 1905 to 20,000 yards (18 km) at the Battle of Jutland
Battle of Jutland
The Battle of Jutland was a naval battle between the British Royal Navy's Grand Fleet and the Imperial German Navy's High Seas Fleet during the First World War. The battle was fought on 31 May and 1 June 1916 in the North Sea near Jutland, Denmark. It was the largest naval battle and the only...
in 1916. The introduction of brown powder
Brown powder
Brown powder or prismatic powder, sometimes referred as "cocoa powder" due to its color, is an explosive agent similar to black powder, but with a slower burning rate...
, which burned less rapidly than black powder, allowed longer barrels, which allowed greater accuracy; and because it expanded less sharply than black powder, it put less strain on the insides of the barrel, allowing guns to last longer and to be manufactured to tighter tolerances. The addition of radar
Radar
Radar is an object-detection system which uses radio waves to determine the range, altitude, direction, or speed of objects. It can be used to detect aircraft, ships, spacecraft, guided missiles, motor vehicles, weather formations, and terrain. The radar dish or antenna transmits pulses of radio...
allowed World War II ships to fire further, more accurately, and at night.

Notable battles in which warships crossed the T include: