Encyclopedia
Parallelism is a term in geometry
Geometry
Geometry arose as the field of knowledge dealing with spatial relationships. Geometry was one of the two fields of pre-modern mathematics, the other being the study of numbers ....
and in everyday life that refers to a property in Euclidean space
Euclidean space
In mathematics, Euclidean space is the Euclidean plane and three-dimensional space of Euclidean geometry, as well as the generalizations of these notions to higher dimensions...
of two or more line
Line (mathematics)
The notion of line or straight line was introduced by the ancient mathematicians to represent straight objects with negligible width and depth. Lines are an idealization of such objects...
s or planes
Plane (mathematics)
In mathematics, a plane is a flat, two-dimensional surface. A plane is the two dimensional analogue of a point , a line and a space...
, or a combination of these. The assumed existence and properties of parallel lines are the basis of Euclid
Euclid
Euclid , fl. 300 BC, also known as Euclid of Alexandria, was a Greek mathematician, often referred to as the "Father of Geometry". He was active in Alexandria during the reign of Ptolemy I...
's parallel postulate
Parallel postulate
In geometry, the parallel postulate, also called Euclid's fifth postulate because it is the fifth postulate in Euclid's Elements, is a distinctive axiom in Euclidean geometry...
. Two lines in a plane that do not intersect or touch at a point are called parallel lines. Likewise, a line and a plane, or two planes, in three-dimensional Euclidean space that do not share a point are said to be parallel.

In a non-Euclidean space
Non-Euclidean geometry
Non-Euclidean geometry is the term used to refer to two specific geometries which are, loosely speaking, obtained by negating the Euclidean parallel postulate, namely hyperbolic and elliptic geometry. This is one term which, for historical reasons, has a meaning in mathematics which is much...
, parallel lines are those that intersect only in the limit at infinity.

The parallel symbol is

indicates that line AB is parallel to line CD.

In the Unicode
Unicode
Unicode is a computing industry standard for the consistent encoding, representation and handling of text expressed in most of the world's writing systems...
character set, the 'parallel' and 'not parallel' signs have codepoints U+2225 (∥) and U+2226 (∦) respectively. 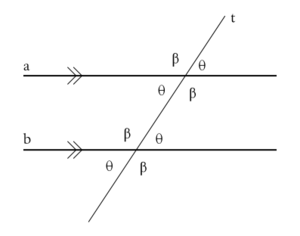 Given straight lines l and m, the following descriptions of line m equivalently define it as parallel to line l in Euclidean space
Euclidean space
In mathematics, Euclidean space is the Euclidean plane and three-dimensional space of Euclidean geometry, as well as the generalizations of these notions to higher dimensions...
:

The three definitions above lead to three different methods of construction of parallel lines.

Another definition of parallel line that's often used is that two lines are parallel if they do not intersect, though this definition applies only in the 2-dimensional plane. Another easy way is to remember that a parallel line is a line that has an equal distance with the opposite line.

Because a parallel line is a line that has an equal distance with the opposite line, there is a unique distance between the two parallel lines. Given the equations of two non-vertical parallel lines:

the distance between the two lines can be found by solving the linear system of:

and the system of:

to get the coordinates of the points. The solution to the linear systems are:

Putting into the distance formula gives us:

which of course, is:

Also if 2 lines are

the distance between the two lines can be formulated by the following formula:

In general geometry it is useful to distinguish the three definitions above as three different types of lines, respectively equidistant lines, parallel geodesics and geodesics sharing a common perpendicular.

While in Euclidean geometry two geodesics can either intersect or be parallel, in general and in hyperbolic space in particular there are three possibilities. Two geodesics can be either:


In the literature ultra parallel geodesics are often called parallel. Geodesics intersecting at infinity are then called limit geodesics. 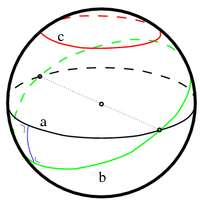 In the spherical plane
Spherical geometry
Spherical geometry is the geometry of the two-dimensional surface of a sphere. It is an example of a geometry which is not Euclidean. Two practical applications of the principles of spherical geometry are to navigation and astronomy....
, all geodesics are great circles. Great circles divide the sphere in two equal hemispheres
Sphere
A sphere is a perfectly round geometrical object in three-dimensional space, such as the shape of a round ball. Like a circle in two dimensions, a perfect sphere is completely symmetrical around its center, with all points on the surface lying the same distance r from the center point...
and all great circles intersect each other. By the above definitions, there are no parallel geodesics to a given geodesic, all geodesics intersect. Equidistant lines on the sphere are called parallels of latitude in analog to latitude
Latitude
In geography, the latitude of a location on the Earth is the angular distance of that location south or north of the Equator. The latitude is an angle, and is usually measured in degrees . The equator has a latitude of 0°, the North pole has a latitude of 90° north , and the South pole has a...
lines on a globe. Parallel lines in Euclidean space are straight lines; equidistant lines are not geodesics and therefore are not directly analogous to straight lines in the Euclidean space. An object traveling along such a line has to accelerate away from the geodesic to which it is equidistant to avoid intersecting with it. When embedded in Euclidean space a dimension
Dimension
In physics and mathematics, the dimension of a space or object is informally defined as the minimum number of coordinates needed to specify any point within it. Thus a line has a dimension of one because only one coordinate is needed to specify a point on it...
higher, parallels of latitude can be generated by the intersection of the sphere with a plane parallel to a plane through the center.

In the hyperbolic plane
Hyperbolic geometry
In mathematics, hyperbolic geometry is a non-Euclidean geometry, meaning that the parallel postulate of Euclidean geometry is replaced...
, there are two lines through a given point that intersect a given line in the limit to infinity. While in Euclidean geometry a geodesic intersects its parallels in both directions in the limit to infinity, in hyperbolic geometry both directions have their own line of parallelism. When visualized on a plane a geodesic is said to have a left-handed parallel and a right-handed parallel through a given point. The angle the parallel lines make with the perpendicular from that point to the given line is called the angle of parallelism
Angle of parallelism
In hyperbolic geometry, the angle of parallelism φ, also known as Π, is the angle at one vertex of a right hyperbolic triangle that has two asymptotic parallel sides. The angle depends on the segment length a between the right angle and the vertex of the angle of parallelism φ...
. The angle of parallelism depends on the distance of the point to the line with respect to the curvature
Curvature
In mathematics, curvature refers to any of a number of loosely related concepts in different areas of geometry. Intuitively, curvature is the amount by which a geometric object deviates from being flat, or straight in the case of a line, but this is defined in different ways depending on the context...
of the space. The angle is also present in the Euclidean case, there it is always 90° so the left and right-handed parallels coincide
Coincident
Coincident is a geometric term that pertains to the relationship between two vectors. Vectors consist of a "magnitude" and a "direction". Vectors can be said to be coincident when their direction is the same though the magnitude may be different; that is to say, they lie one on top of the other...
. The parallel lines divide the set of geodesics through the point in two sets: intersecting geodesics that intersect the given line in the hyperbolic plane, and ultra parallel geodesics that do not intersect even in the limit to infinity (in either direction). In the Euclidean limit the latter set is empty.