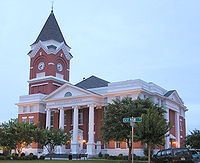 A courthouse is a building that is home to a local court
Court
A court is a form of tribunal, often a governmental institution, with the authority to adjudicate legal disputes between parties and carry out the administration of justice in civil, criminal, and administrative matters in accordance with the rule of law...
of law and often the regional county government as well, although this is not the case in some larger cities. The term is common in North America
North America
North America is a continent wholly within the Northern Hemisphere and almost wholly within the Western Hemisphere. It is also considered a northern subcontinent of the Americas...
. In most other English speaking countries, buildings which house courts of law are simply called "courts" or "court buildings". In most of Continental Europe and former non-English speaking European colonies, the equivalent term is a palace of justice, Palais de Justice.

In most counties
County (United States)
In the United States, a county is a geographic subdivision of a state , usually assigned some governmental authority. The term "county" is used in 48 of the 50 states; Louisiana is divided into parishes and Alaska into boroughs. Parishes and boroughs are called "county-equivalents" by the U.S...
in the United States
United States
The United States of America is a federal constitutional republic comprising fifty states and a federal district...
, the local trial court
Trial court
A trial court or court of first instance is a court in which trials take place. Such courts are said to have original jurisdiction.- In the United States :...
s conduct their business in a centrally located courthouse which may also house county governmental offices. The courthouse is usually located in the county seat
County seat
A county seat is an administrative center, or seat of government, for a county or civil parish. The term is primarily used in the United States....
, although large metropolitan counties may have satellite or annex offices for their courts.

In some cases this building may be renamed in some way or its function divided as between a judicial building and administrative office building. Many judges also officiate at civil marriage ceremonies in their courthouse chambers. In some places, the courthouse also contains the main administrative office for the county government, or when a new courthouse is constructed, the former one will often be used for other local government offices. Either way, a typical courthouse will have one or more courtroom
Courtroom
A courtroom is the actual enclosed space in which a judge regularly holds court.The schedule of official court proceedings is called a docket; the term is also synonymous with a court's caseload as a whole.-Courtroom design:-United States:...
s and a court clerk's office with a filing window where litigants may submit documents for filing
Filing (legal)
In law, filing is the act of submitting a document to the clerk of a court for the court's immediate consideration, for storage in the court's files, or both. Courts will not consider motions unless an appropriate memorandum or brief is filed before the appropriate deadline...
with the court.

The courthouse is part of the iconography of American life and is equivalent to the city hall as the symbol of the municipium in European free cities, then often shown in American cinema
Film
A film, also called a movie or motion picture, is a series of still or moving images. It is produced by recording photographic images with cameras, or by creating images using animation techniques or visual effects...
(recently in "Peyton Place
Peyton Place (TV series)
Peyton Place is an American prime-time soap opera which aired on ABC in half-hour episodes from September 15, 1964 to June 2, 1969.Based upon the 1956 novel of the same name by Grace Metalious, the series was preceded by a 1957 film adaptation. A total of 514 episodes were broadcast, in...
" or "Back to the Future
Back to the Future
Back to the Future is a 1985 American science-fiction adventure film. It was directed by Robert Zemeckis, written by Zemeckis and Bob Gale, produced by Steven Spielberg, and starred Michael J. Fox, Christopher Lloyd, Lea Thompson, Crispin Glover and Thomas F. Wilson. The film tells the story of...
"). They range from small-town rural buildings with a few rooms to huge metropolitan courthouses that occupy large plots of land. The style of American architecture used varies, with common styles including federal, Greek Revival, neoclassicist
Neoclassicism
Neoclassicism is the name given to Western movements in the decorative and visual arts, literature, theatre, music, and architecture that draw inspiration from the "classical" art and culture of Ancient Greece or Ancient Rome...
, and modern
Modern architecture
Modern architecture is generally characterized by simplification of form and creation of ornament from the structure and theme of the building. It is a term applied to an overarching movement, with its exact definition and scope varying widely...
.

Due to concerns over potential violence, many courthouses in American cities often have security checkpoints where all incoming persons are searched for weapons, normally through the use of an X-ray machine for all bags and a walk-through metal detector, much like those found at airports.

Some courthouses in areas with high levels of violent crime
Violent crime
A violent crime or crime of violence is a crime in which the offender uses or threatens to use violent force upon the victim. This entails both crimes in which the violent act is the objective, such as murder, as well as crimes in which violence is the means to an end, such as robbery. Violent...
have redundant layers of security. For example, when the Supreme Court of California hears oral argument in San Francisco or Los Angeles, visitors must pass through one security checkpoint to enter the building, and another to enter the courtroom.

See the category: Courthouses in Canada

In Canada
Canada
Canada is a North American country consisting of ten provinces and three territories. Located in the northern part of the continent, it extends from the Atlantic Ocean in the east to the Pacific Ocean in the west, and northward into the Arctic Ocean...
each municipality constructs its own courthouse, or several in the case of large cities. In smaller communities the court is in the same building as the city hall
City hall
In local government, a city hall, town hall or a municipal building or civic centre, is the chief administrative building of a city...
and other municipal offices. In the past many courthouses also included the local prison.

One well-known court house in Canada is the Romanesque Revival (Neo-Romanesque) Old City Hall
Old City Hall
-United States:*District of Columbia City Hall, Washington, D.C., also known as Old City Hall*Old City Hall and Engine House, Annapolis, Maryland*Old City Hall , now the Whatcom Museum of History and Art*Old City Hall...
in Toronto
Toronto
Toronto is the provincial capital of Ontario and the largest city in Canada. It is located in Southern Ontario on the northwestern shore of Lake Ontario. A relatively modern city, Toronto's history dates back to the late-18th century, when its land was first purchased by the British monarchy from...
, Ontario
Ontario
Ontario is a province of Canada, located in east-central Canada. It is Canada's most populous province and second largest in total area. It is home to the nation's most populous city, Toronto, and the nation's capital, Ottawa....
. Designed by E.J. Lennox, Old City Hall was completed in 1899 and has been functioning as a municipal building ever since. It was originally constructed to facilitate Toronto’s City Council, legal and municipal offices and the city's courts however following the construction of the fourth city hall
Toronto City Hall
The City Hall of Toronto, Ontario, Canada is the home of the city's municipal government and one of its most distinctive landmarks. Designed by Finnish architect Viljo Revell and landscape architect Richard Strong, and engineered by Hannskarl Bandel, the building opened in 1965...
(adjacent to the third, on Queen Street) the building's purpose was limited to being solely a courthouse for the Ontario Court of Justice
Ontario Court of Justice
The Ontario Court of Justice is a Provincial Court for the Canadian province of Ontario. This court oversees matters relating to family law and criminal law....
. This building can be described as Romanesque Revival due to multiple characteristics it shares with Romanesque architecture (despite being constructed seven centuries later in a completely different continent). These characteristics include the materiality in terms of large stone construction, the repetitive rhythmic use of windows containing various sized arches and barrel vaults directing attention towards them, decorated spandrels (wall section connecting arches) and the inclusion of gabled walls (pointed sections). Old City Hall has been designated a National Historical Site since 1989.