Encyclopedia
A courtroom is the actual enclosed space in which a judge
Judge
A judge is a person who presides over court proceedings, either alone or as part of a panel of judges. The powers, functions, method of appointment, discipline, and training of judges vary widely across different jurisdictions. The judge is supposed to conduct the trial impartially and in an open...
regularly holds court
Court
A court is a form of tribunal, often a governmental institution, with the authority to adjudicate legal disputes between parties and carry out the administration of justice in civil, criminal, and administrative matters in accordance with the rule of law...
. 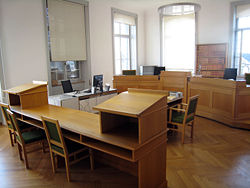 The schedule of official court proceedings is called a docket
Docket
Docket may refer to:*Docket , the official schedule of proceedings in lawsuits pending in a court of law. Term also includes a case identification number and reference point and case history for all case work involving a particular case....
; the term is also synonymous with a court's caseload as a whole.

Adjacent to the bench are the witness stand and the desks where the court clerk
Court clerk
A court clerk is an officer of the court whose responsibilities include maintaining the records of a court. Another duty is to administer oaths to witnesses, jurors, and grand jurors...
and the court reporter
Court reporter
A court reporter, stenotype reporter, voice writing reporter, or transcriber is a person whose occupation is to transcribe spoken or recorded speech into written form, using machine shorthand or voice writing equipment to produce official transcripts of court hearings, depositions and other...
sit. The courtroom is divided into two parts by a barrier known as the bar
Bar (law)
Bar in a legal context has three possible meanings: the division of a courtroom between its working and public areas; the process of qualifying to practice law; and the legal profession.-Courtroom division:...
. The bar may be an actual railing, or an imaginary barrier. The bailiff
Bailiff
A bailiff is a governor or custodian ; a legal officer to whom some degree of authority, care or jurisdiction is committed...
stands (or sits) against one wall and keeps order in the courtroom.

On one side is the judge's bench, the tables for the plaintiff, the defendant, and their respective counsel, and a separate group of seats known as the jury box where the jury sits (in jurisdictions that allow for jury trials). Apart from the parties to the case and any witnesses, only the lawyers can literally pass the bar (court personnel and jury members usually enter through separate doors), and this is the reason why the term "the bar" has come to refer to the legal profession as a whole (see bar association
Bar association
A bar association is a professional body of lawyers. Some bar associations are responsible for the regulation of the legal profession in their jurisdiction; others are professional organizations dedicated to serving their members; in many cases, they are both...
). There is usually a podium or lectern between the two tables where the lawyers may stand when they argue their case before the judge.

There is usually an open space between the bench and the counsel tables, because of the court clerk and court reporter's tables in front of the bench and the jury box on the side. This space is called the well. It is extremely disrespectful to the court for persons who are not court employees to directly "traverse the well" without permission—that is, to walk directly towards the bench across the well—and some courts have rules expressly forbidding this. Instead, if documents need to be given to or taken from the judge, attorneys are normally expected to approach the court clerk or bailiff, who acts as an intermediary. During trials, attorneys will ask the court's permission to traverse the well or "approach the bench" for "sidebar" conferences with the judge.

The other side of the bar is open to the general public and there are usually seats for curious spectators. This area is the gallery. Seating for the gallery can either be pew style benches
Pew
A pew is a long bench seat or enclosed box used for seating members of a congregation or choir in a church, or sometimes in a courtroom.-Overview:Churches were not commonly furnished with permanent pews before the Protestant Reformation...
or theater seats. In certain urban criminal courtrooms (e.g., Philadelphia and Chicago), the gallery is separated from the rest of the room by a partition of bulletproof glass
Bulletproof glass
Bulletproof glass is a type of strong but optically transparent material that is particularly resistant to being penetrated when struck by bullets, but is not completely impenetrable. It is usually made from a combination of two or more types of glass, one hard and one soft...
to prevent injury to spectators (and vice versa), or to control them from charging across the bar in tension-filled cases.

All of the above applies only to trial courts. Appellate courts in the United States are not finders of fact, so they do not use juries or receive evidence
Evidence (law)
The law of evidence encompasses the rules and legal principles that govern the proof of facts in a legal proceeding. These rules determine what evidence can be considered by the trier of fact in reaching its decision and, sometimes, the weight that may be given to that evidence...
into the record; that is the trial court's job. Therefore, in an appellate court, there is neither a witness stand nor a jury box, and the bench is much larger to accommodate multiple judges or justices.

The walls are often partially or completely wood-paneled. This is a matter of style and tradition, but some jurisdictions have elected to construct courtrooms with a more "modern" appearance. Some courtroom settings are little more than a closed circuit television camera transmitting the proceedings to a correctional facility elsewhere in order to protect the court from violent defendants who view the proceedings on television within a jail conference room and are allowed duplex communications
Duplex (telecommunications)
A duplex communication system is a system composed of two connected parties or devices that can communicate with one another in both directions. The term multiplexing is used when describing communication between more than two parties or devices....
with the judge and other officers of the court.

Multiple courtrooms may be housed in a courthouse
Courthouse
A courthouse is a building that is home to a local court of law and often the regional county government as well, although this is not the case in some larger cities. The term is common in North America. In most other English speaking countries, buildings which house courts of law are simply...
.

Courts vary considerably in their layout, which depends a great deal on the history of the building and the practicalities of its use. While some courts are wood panelled, most are not. Depending on the layout of the room, a claimant may sit on either the right or left in a civil court, just as the prosecution may sit on either side (usually the opposite side to the jury) in a criminal court.

In a criminal court, where the defendant was previously held in custody, the defendant will usually be escorted by members of the security firm that has the contract to serve that court. In rare circumstances in civil trials a bailiff or someone else charged to keep order may be present (for example if a tenant who is due to be evicted for violent behaviour arrives in court drunk).

Advocates usually speak standing up, but from where they were seated. There is rarely any space for them to move in any case.

All appellate courts are capable of hearing evidence (and also to be finders of fact), for example where there is an allegation of bias in the lower court, or where fresh evidence is adduced to persuade the court to allow a retrial. In those cases witness evidence may be necessary and many appellate courts have witness stands.

Flags are rarely seen in English courts. It is most common for the Royal Coat of Arms to be placed above and behind the judge, or presiding magistrate, although there are exceptions to this. For example in the City of London
City of London
The City of London is a small area within Greater London, England. It is the historic core of London around which the modern conurbation grew and has held city status since time immemorial. The City’s boundaries have remained almost unchanged since the Middle Ages, and it is now only a tiny part of...
magistrates' court a sword stands vertically behind the judge which is flanked by the arms of the City and the Crown.

As in other countries, the judge or sheriff sits on the bench
Bench (law)
Bench in legal contexts means simply the location in a courtroom where a judge sits. The historical roots of that meaning come from the fact that judges formerly sat on long seats or benches when presiding over a court...
. Directly below the bench is the clerk's station which usually has a computer to allow the clerk to get on with Court Disposal work during proceedings.

Directly in front of the clerk is the well of court which has a
semi-circular table at which all the advocates sit during proceedings. The Procurator Fiscal
Procurator Fiscal
A procurator fiscal is a public prosecutor in Scotland. They investigate all sudden and suspicious deaths in Scotland , conduct Fatal Accident Inquiries and handle criminal complaints against the police A procurator fiscal (pl. procurators fiscal) is a public prosecutor in Scotland. They...
or Advocate Depute always sits in the seat at the right of the clerk during criminal proceedings.

Behind the well of the court is the dock in which the accused will sit during proceedings. Dependent on the style of the courtroom, the jury
Jury
A jury is a sworn body of people convened to render an impartial verdict officially submitted to them by a court, or to set a penalty or judgment. Modern juries tend to be found in courts to ascertain the guilt, or lack thereof, in a crime. In Anglophone jurisdictions, the verdict may be guilty,...
box will either be on the right or left hand side of the well of the court. Scotland is unique in the western world in that it has 15 jurors.

Usually to the right or left of the bench (again dependent on style and always directly opposite the jury) slightly raised and facing forward is the stand where any witness who is called will give evidence. The stand is designed so that any solicitor examining a witness as well as the judge/sheriff may get a good view of the testimony. At the far side of the courtroom directly opposite the jury box and behind the stand are seats for journalists who are attached to the court and the court social worker. Seats for members of the public are the back of the courtroom.

There is no court reporter
Court reporter
A court reporter, stenotype reporter, voice writing reporter, or transcriber is a person whose occupation is to transcribe spoken or recorded speech into written form, using machine shorthand or voice writing equipment to produce official transcripts of court hearings, depositions and other...
in Scotland, normal summary cases are simply minuted by the clerk indicating the disposal. If the case is a solemn (more serious) case involving a jury or if the case has a sexual element then proceedings will be tape recorded which is done under the supervision of the clerk.
The source of this article is wikipedia, the free encyclopedia.  The text of this article is licensed under the GFDL.