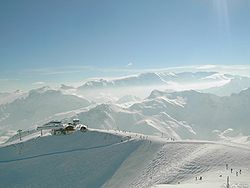 The original resort was planned during the Second World War with a study in 1942 by the Vichy regime and in a doctorate by the town planner Laurent Chappis
Laurent Chappis
Laurent Chappis is an architect and town planner, born in Aix-les-Bains, France. He created the French ski resort of Courchevel located in the Trois Vallées and in doing so practically wrote the rule book on how to design a ski resort...
. Chappis was a natural choice to direct the development of the resort in the immediate post war years. Courchevel 1850 was significant as it was the first resort in France to be constructed from scratch rather than based around an existing village.

Within the Tarentaise Valley
Tarentaise Valley
The Tarentaise Valley is a valley of the Isère River in the heart of the French Alps, located in the Savoy region of France. The valley is named for the ancient town of Darantasia, the capital of the pre-Roman Centrones tribe.-Description:...
you find the biggest concentration of world-class ski resorts in the world. Most well known neighbour systems are Paradiski
Paradiski
Paradiski is a ski-area in the Tarentaise Valley offering uninterrupted skiing in between the areas of Les Arcs, Peisey-Vallandry and La Plagne. The area is linked, since December 2003, by the Vanoise Express...
(Les Arcs
Les Arcs
Les Arcs is a ski resort located in Savoie, France, in the Tarentaise Valley town of Bourg-Saint-Maurice. Initially created by Robert Blanc and Roger Godino...
, La Plagne
La Plagne
La Plagne is a French ski area in the alpine valley of the Tarentaise . Since 2003, La Plagne and the neighbouring resort of Les Arcs form Paradiski's ski area...
) and Espace Killy
Espace Killy
The Espace Killy is a ski area in the Tarentaise Valley, Savoie in the French Alps, named after the skier Jean-Claude Killy. It covers the resorts of Val d'Isère and Tignes In Espace Killy there are 300 km of pistes:...
(Val d'Isère
Val d'Isère
Val d'Isère is a commune of the Tarentaise Valley, in the Savoie department in south-eastern France. It lies from the border with Italy. It is on the border of the Vanoise National Park created in 1963. The Face de Bellevarde was the scene of the men's downhill race as part of the 1992 Winter...
and Tignes
Tignes
Tignes is a commune in the Tarentaise Valley, Savoie department in the Rhône-Alpes region in south-eastern France.It is also a ski resort near Val d'Isère, that are linked together as the "Espace Killy" region...
). A weekly lift ticket
Lift ticket
A Lift ticket is an identifier usually attached to a skier's outerwear that indicates they have paid and can ride on the ski lift up a mountain to ski....
in Courchevel/Les Trois Vallées gives you a choice to ski one day in each of the other two systems mentioned. There were once plans to interlink all systems and resorts to create the - by far - largest ski area in the world. However that vision was ended with the creation of the Vanoise National Park
Vanoise National Park
Vanoise National Park , is a French national park in the Tarentaise Valley in the French Alps, created in 1963 after mobilization from the environmentalist movement against a touristic project. It was the first French national park. This park is in the département of Savoie...
.

Courchevel is the most eastern resort of the Three Valleys, the biggest connected ski area in the world. It is renowned for its excellent lift system which is virtually queue free, even at the busiest of times. The UK newspaper The Daily Telegraph named Courchevel in 2008 the "best ski resort in Europe, if you can afford it".

Although Courchevel consists of 4 satellite villages (Courchevel Le Praz, Courchevel 1550, Courchevel 1650 and Courchevel 1850) it is most famous for its highest resort, the exclusive village of Courchevel 1850. Named the St. Tropez of winter sports it attracts a select clientele of VIP's and royal families including Prince William & Katle Middleton, the Beckham's, Christina Aquilera, Geri Halliwel,Lionel Richie, the Saudi royal family, Peter Andre, Robbie Williams, Roman Abramovich, George Clooney, Georgio Armani, the King of Maroc and many others.

Courchevel is also known for its fine dining. It's the ski resort with the most Michelin starred restaurants. A total of 7 restaurants share 11 Michelin stars, including 4 restaurants which have been awarded 2 Michelin stars, including Le Chabichou
Le Chabichou
Le Chabichou is a 4-star hotel and a 2 Michelin-starred restaurant in Courchevel, Savoie, France. The hotel was opened in 1962 by Michel Rochedy...
. It also hosts a variety of luxury shops including Louis Vuitton
Louis Vuitton
Louis Vuitton Malletier – commonly referred to as Louis Vuitton , or shortened to LV – is a French fashion house founded in 1854 by Louis Vuitton. The label is well known for its LV monogram, which is featured on most products, ranging from luxury trunks and leather goods to ready-to-wear, shoes,...
, Hermes
Hermes
Hermes is the great messenger of the gods in Greek mythology and a guide to the Underworld. Hermes was born on Mount Kyllini in Arcadia. An Olympian god, he is also the patron of boundaries and of the travelers who cross them, of shepherds and cowherds, of the cunning of thieves, of orators and...
, Valentino
Valentino
Valentino Clemente Ludovico Garavani , best known as Valentino, is an Italian fashion designer and founder of the Valentino SpA brand and company. His main lines were Valentino, Valentino Garavani, Valentino Roma, and R.E.D...
, Prada
Prada
Prada S.p.A. is an Italian fashion label specializing in luxury goods for men and women , founded by Mario Prada.-Foundations:...
, Zilli and Chanel
Chanel
Chanel S.A. is a French fashion house founded by the couturier Gabrielle "Coco" Chanel, well established in haute couture, specializing in luxury goods . She gained the name "Coco" while maintaining a career as a singer at a café in France...
.

Although the huge majority of Courchevel's visitors are of British nationality (source Courchevel Tourist Agency) the resort is also known for the wealthy Russian elite who flock to the resort during Russian Orthodox Christmas and Russian New Year. These are celebrated 2 weeks later than in Western Europe, on the 7th and 13th of January. Because of this Courchevel's name has become synonymous with "winter playground of the rich and famous" in Russia. The first two weeks of January are high season weeks in Courchevel as a result here of.

Courchevel is known to be an expensive resort. One of the reasons for this is are the high prices of residential and commercial property. Courchevel 1850 is the 6th most expensive place in the world with average square meter prices of 27.000 euros per square meter of property. It leaves cities like Hong Kong, Cannes and Tokyo behind.

Courchevel has one of the largest bases for ski instructors and other seasonals due to the size of the three valleys area. Courchevel's couloirs are renowned as some of the most difficult black runs in the world.

Courchevel's sister city is Park City, Utah, USA
Park City, Utah
Park City is a town in Summit and Wasatch counties in the U.S. state of Utah. It is considered to be part of the Wasatch Back. The city is southeast of downtown Salt Lake City and from Salt Lake City's east edge of Sugar House along Interstate 80. The population was 7,558 at the 2010 census...
, and as such Courchevel has a red-graded ski piste named "Park City".

Courchevel's airport (45.397395°N 6.634884°W) also has a certain degree of infamy in the aviation industry as home to one of the shortest runways in the world, with a length of 525 metres (1,722.4 ft) and a gradient of 18.5% in order to help slow landing aircraft. The airport has a dangerous approach through deep valleys which can only be performed by specially certified pilots. On landing there is no go-around procedure, as most of the world's airports have - there is merely a very steep hill which has seen a few accidents since the airport first opened. Larger propeller aircraft such as the Twin Otter
De Havilland Canada DHC-6 Twin Otter
The DHC-6 Twin Otter is a Canadian 19-passenger STOL utility aircraft developed by de Havilland Canada and currently produced by Viking Air. The aircraft's fixed tricycle undercarriage, STOL abilities and high rate of climb have made it a successful cargo, regional passenger airliner and MEDEVAC...
and Dash 7
De Havilland Canada Dash 7
The de Havilland Canada DHC-7, popularly known as the Dash 7, is a turboprop-powered regional airliner with STOL capabilities. It first flew in 1975 and remained in production until 1988 when the parent company, de Havilland Canada, was purchased by Boeing and was later sold to Bombardier...
(carrying up to 50 people) have been regular users of the airport over the years, but have since been phased out of use and smaller Cessna
Cessna
The Cessna Aircraft Company is an airplane manufacturing corporation headquartered in Wichita, Kansas, USA. Their main products are general aviation aircraft. Although they are the most well known for their small, piston-powered aircraft, they also produce business jets. The company is a subsidiary...
s and helicopters are often seen sitting on the tarmac nowadays.

The pre-credit sequence of the James Bond film Tomorrow Never Dies was filmed at Courchevel.

The History Channel program Most Extreme Airports, ranks it as the 7th most dangerous airport in the world.