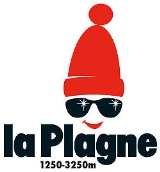 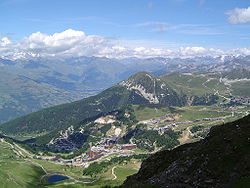 La Plagne is a French ski
Ski
A ski is a long, flat device worn on the foot, usually attached through a boot, designed to help the wearer slide smoothly over snow. Originally intended as an aid to travel in snowy regions, they are now mainly used for recreational and sporting purposes...
area in the alpine
Alps
The Alps is one of the great mountain range systems of Europe, stretching from Austria and Slovenia in the east through Italy, Switzerland, Liechtenstein and Germany to France in the west....
valley of the Tarentaise
Tarentaise
Tarentaise can refer to the following:Places* Moûtiers, historically known as Tarentaise, in Savoy* Tarentaise Valley* Tarentaise, LoirePeople* Peter of TarentaiseOther*Tarentaise cattle...
(Savoie
Savoie
Savoie is a French department located in the Rhône-Alpes region in the French Alps.Together with the Haute-Savoie, Savoie is one of the two departments of the historic region of Savoy that was annexed by France on June 14, 1860, following the signature of the Treaty of Turin on March 24, 1860...
). Since 2003, La Plagne and the neighbouring resort of Les Arcs
Les Arcs
Les Arcs is a ski resort located in Savoie, France, in the Tarentaise Valley town of Bourg-Saint-Maurice. Initially created by Robert Blanc and Roger Godino...
form Paradiski
Paradiski
Paradiski is a ski-area in the Tarentaise Valley offering uninterrupted skiing in between the areas of Les Arcs, Peisey-Vallandry and La Plagne. The area is linked, since December 2003, by the Vanoise Express...
's ski area. It is currently owned by Compagnie des Alpes
Compagnie des Alpes
Compagnie des Alpes is a French company created in 1989 to operate many ski resorts in Europe. Compagnie des Alpes is a part of Caisse des dépôts et consignations.-History:...
.

La Plagne lies at altitudes between 3250 metres (10,660 ft) (on the Glacier de la Chiaupe near the top of Bellecôte
Bellecôte
The Bellecôte is a mountain in the Vanoise Massif in the Graian Alps, lying in the northern part of the Vanoise National Park and dominating the Peisey-Nancroix valley in Savoie. The north face is immense and austere, whereas the south face is more accessible....
) and 1250 metres (4100 ft) (in the village of Montchavin). La Plagne has 100 km² (38 mi²) of ski area spread across four communes (Aime
Aime
Aime is a commune in the Savoie department in the Rhône-Alpes region in south-eastern France.-Geography:The commune lies in the Tarentaise Valley, partly overlapping the ski resorts of La Plagne and Les Arcs.-Transportation:...
, Bellentre
Bellentre
Bellentre is a commune in the Savoie department in the region of Rhône-Alpes in south-eastern France.-Geography:Situated in the Tarentaise Valley, the commune stretches over villages of Montchavin Les Coches and parts of the ski resort of La Plagne....
, Champagny-en-Vanoise
Champagny-en-Vanoise
Champagny-en-Vanoise is a commune in the Savoie department in the Rhône-Alpes region in south-eastern France.It is also known for the skiing and snow-boarding slopes.-External links:*...
and Mâcot-la-Plagne
Mâcot-la-Plagne
Mâcot-la-Plagne is a commune in the Savoie department in the Rhône-Alpes region in south-eastern France.-Geography:It gives its name to the French ski resort La Plagne, most of which lies within the commune of Mâcot-la-Plagne...
). La Plagne has 225 kilometres (140 mi) of slopes (134 slopes : 15 black (expert), 30 red (advanced), 72 blue (intermediate) and 10 green (beginner)), and a large off piste skiing area including Bellecôte's North Face. La Plagne is a modern ski resort with 2 cable-cars (the Telemetro, linking Plagne Centre and Aime-La Plagne and the Vanoise Express
Vanoise Express
The Vanoise Express is a double-decker cable car that links La Plagne with Les Arcs ski resorts in the Alps, acting as a vital link in the Paradiski area....
, which links La Plagne to Les Arcs
Les Arcs
Les Arcs is a ski resort located in Savoie, France, in the Tarentaise Valley town of Bourg-Saint-Maurice. Initially created by Robert Blanc and Roger Godino...
and was opened in 2003 and travels at over 40 kilometres/hour (25 mi/hr), making it one of the fastest of its kind in the world), 8 gondola
Gondola lift
A gondola lift is a type of aerial lift, normally called a cable car, which is supported and propelled by cables from above. It consists of a loop of steel cable that is strung between two stations, sometimes over intermediate supporting towers. The cable is driven by a bullwheel in a terminal,...
s, 36 chairlift
Chairlift
An elevated passenger ropeway, or chairlift, is a type of aerial lift, which consists of a continuously circulating steel cable loop strung between two end terminals and usually over intermediate towers, carrying a series of chairs...
s (1 8-seater, 11 6-seaters, 19 4-seaters and 5 2-seaters) and 38 drag lift
Surface lift
A surface lift is a type of cable transportation system used to transport skiers and snowboarders where riders remain on the ground as they are pulled uphill.Types of surface lifts include the Poma lift, J-bar, T-bar, rope tow, and magic carpet....
s. A bobsleigh, luge, and skeleton track
La Plagne bobsleigh, luge, and skeleton track
The La Plagne bobsleigh, luge, and skeleton track is a bobsleigh, luge, and skeleton track located in La Plagne, France. The track hosted the bobsleigh and luge competitions for the 1992 Winter Olympics located in neighboring Albertville.-History:...
was built in La Plagne for the 1992 Winter Olympics
1992 Winter Olympics
The 1992 Winter Olympics, officially known as the XVI Olympic Winter Games, were a winter multi-sport event celebrated from 8 to 23 February 1992 in Albertville, France. They were the last Winter Olympics to be held the same year as the Summer Olympics, and the first where the Winter Paralympics...
held in nearby Albertville
Albertville
Albertville is a commune in the Savoie department in the Rhône-Alpes region in south-eastern France.The town is best known for hosting the 1992 Winter Olympics.-Geography:...
.

La Plagne was created in 1961, as with many resorts in the Alps, to save the valleys from becoming deserted. The agriculture and mining industries were in crisis, which led to young people leaving the valley in search of work. In 1960, four towns (Aime, Bellentre, Longefoy and Macôt) created an association to defend their interests, with an initiative of Dr. Borrionne, mayor of Aime. On 24 December 1961, La Plagne opened, with its two drag lifts and its four slopes. Emile Allais, great ski-champion, has helped La Plagne to grow. Immediately, La Plagne generated a great deal of success, and in 1966, Guy Lux, a French TV, presented "Interneiges", a live competition between two French resorts.


The first of the resorts of La Plagne opened in December 1961. The name of "Plagne Centre" dates from 1982, before which the resort was before simply called La Plagne. Plagne Centre has an urban, but functional architecture, and was created by Michel Bezançon. Plagne Centre is a model of the "station intégrée", where cars and skiers are separated


Located in the commune of Aime
Aime
Aime is a commune in the Savoie department in the Rhône-Alpes region in south-eastern France.-Geography:The commune lies in the Tarentaise Valley, partly overlapping the ski resorts of La Plagne and Les Arcs.-Transportation:...
, the building of Aime-La Plagne began in 1968, but the resort itself opened in December 1969. Called the "Steamer of the snow", the main building (picture on the right) of Aime-La Plagne was created by Michel Bezançon. In 1990, the "Club Med" was built, with a design inspired by Tibet
Tibet
Tibet is a plateau region in Asia, north-east of the Himalayas. It is the traditional homeland of the Tibetan people as well as some other ethnic groups such as Monpas, Qiang, and Lhobas, and is now also inhabited by considerable numbers of Han and Hui people...
an temples.


At the end of the '60s, this little village, located in the valley of Bozel
Bozel
Bozel is a commune in the Savoie department in the Rhône-Alpes region in south-eastern France.Bozel has one surface ski lift and a green run. It also boasts 19 km of cross-country trails....
, wanted to grow. The Vanoise National Park
Vanoise National Park
Vanoise National Park , is a French national park in the Tarentaise Valley in the French Alps, created in 1963 after mobilization from the environmentalist movement against a touristic project. It was the first French national park. This park is in the département of Savoie...
gave Champagny possibility to develop its summer activities. In 1969, Champagny became attached to the La Plagne resort, rather than to nearby Courchevel
Courchevel
Courchevel is the name of a ski resort located in the commune of Saint-Bon-Tarentaise in the French Alps, in the Tarentaise Valley, Savoie, Rhône-Alpes region. It is a part of Les Trois Vallées, the largest linked ski area in the world...
. Champagny is on a south-facing slope, unlike the other parts of La Plagne, meaning it gets more sunshine, therefore less snow. 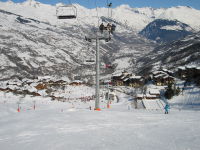 Montchavin is found in the commune
Communes of France
The commune is the lowest level of administrative division in the French Republic. French communes are roughly equivalent to incorporated municipalities or villages in the United States or Gemeinden in Germany...
of Bellentre
Bellentre
Bellentre is a commune in the Savoie department in the region of Rhône-Alpes in south-eastern France.-Geography:Situated in the Tarentaise Valley, the commune stretches over villages of Montchavin Les Coches and parts of the ski resort of La Plagne....
. There are 3 chairlifts
Ski lift
The term ski lift generally refers to any transport device that carries skiers up a hill. A ski lift may fall into one of the following three main classes:-Lift systems and networks:...
serving the village of Montchavin, with one linking to Les Coches. 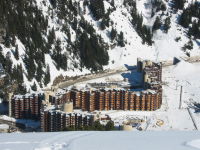 Created in 1974, this resort was in project since 1968. It was to be called "Les Ours", but it is the summit of Bellecôte which gave its name to the new resort. Michel Bezançon drew the resort like a hydroelectric dam to close the valley. In 1975, a gondola linked Bellecôte with Roche de Mio, and three years later with the summit of Bellecôte, in 40 minutes. In December 2005, the first 8-seater chairlift in La Plagne (Arpette Chairlift) is built in Bellecôte.

Opened in 1982
La Plagne 1800 is known as the backwater of La Plagne with a special charm. An old mining village that still sports the traditional wooden chalets with locally quarried 'blue lauze' slate roofs.