Encyclopedia
County Roscommon is a county
Counties of Ireland
The counties of Ireland are sub-national divisions used for the purposes of geographic demarcation and local government. Closely related to the county is the County corporate which covered towns or cities which were deemed to be important enough to be independent from their counties. A county...
in Ireland
Republic of Ireland
Ireland , described as the Republic of Ireland , is a sovereign state in Europe occupying approximately five-sixths of the island of the same name. Its capital is Dublin. Ireland, which had a population of 4.58 million in 2011, is a constitutional republic governed as a parliamentary democracy,...
. It is located in the West Region
West Region, Ireland
The West Region is a NUTS Level III region of Ireland and is governed by the West Regional Authority. It consists of the area under the jurisdiction of the county councils of counties Galway, Mayo and Roscommon, along with Galway City Council. The West region spans 13,801 km², 20% of the total area...
and is also part of the province
Provinces of Ireland
Ireland has historically been divided into four provinces: Leinster, Ulster, Munster and Connacht. The Irish word for this territorial division, cúige, literally meaning "fifth part", indicates that there were once five; the fifth province, Meath, was incorporated into Leinster, with parts going to...
of Connacht
Connacht
Connacht , formerly anglicised as Connaught, is one of the Provinces of Ireland situated in the west of Ireland. In Ancient Ireland, it was one of the fifths ruled by a "king of over-kings" . Following the Norman invasion of Ireland, the ancient kingdoms were shired into a number of counties for...
. It is named after the town of Roscommon
Roscommon
Roscommon is the county town of County Roscommon in Ireland. Its population at the 2006 census stood at 5,017 . The town is located near the junctions of the N60, N61 and N63 roads.-History:...
. Roscommon County Council
Roscommon County Council
Roscommon County Council is the local authority which is responsible for County Roscommon in Ireland. The Council is responsible for Housing and Community, Roads and Transportation, Urban planning and Development, Amenity and Culture, and Environment. The head of the council has the title of...
is the local authority
Local government in the Republic of Ireland
Local government functions in the Republic of Ireland are mostly exercised by thirty-four local authorities, termed county or city councils, which cover the entire territory of the state. The area under the jurisdiction of each of these authorities corresponds to the area of each of the 34 LAU I...
for the county. The population of the county is 63,896 according to the 2011 census. 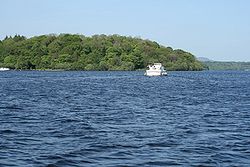 Roscommon comes from the Irish Ros meaning a wooded, gentle height and Comán, the name of the county's famous saint and the first bishop of the see. Rathcroghan was home to the Kings of Connacht and then to the High Kings of Ireland.

Tulsk is the nearest village to the mythological site of Rath Cruachán, home of Queen
Queen regnant
A queen regnant is a female monarch who reigns in her own right, in contrast to a queen consort, who is the wife of a reigning king. An empress regnant is a female monarch who reigns in her own right over an empire....
Medb
Medb
Medb – Middle Irish: Meḋḃ, Meaḋḃ; early modern Irish: Meadhbh ; reformed modern Irish Méabh, Medbh; sometimes Anglicised Maeve, Maev or Maive – is queen of Connacht in the Ulster Cycle of Irish mythology...
(Méadhbh, Maeve). This was the starting point of the Táin Bó Cúailnge
Táin Bó Cúailnge
is a legendary tale from early Irish literature, often considered an epic, although it is written primarily in prose rather than verse. It tells of a war against Ulster by the Connacht queen Medb and her husband Ailill, who intend to steal the stud bull Donn Cuailnge, opposed only by the teenage...
, or Cattle Raid of Cooley, an epic tale in Irish mythology
Irish mythology
The mythology of pre-Christian Ireland did not entirely survive the conversion to Christianity, but much of it was preserved, shorn of its religious meanings, in medieval Irish literature, which represents the most extensive and best preserved of all the branch and the Historical Cycle. There are...
. Rathcroghan has been nominated for UNESCO World Heritage Site
World Heritage Site
A UNESCO World Heritage Site is a place that is listed by the UNESCO as of special cultural or physical significance...
status in 2010, as part of the Royal Sites of Ireland group, with Tara
Hill of Tara
The Hill of Tara , located near the River Boyne, is an archaeological complex that runs between Navan and Dunshaughlin in County Meath, Leinster, Ireland...
.

Dr Douglas Hyde, the first Irish president, was born in County Roscommon and the GAA park in County Roscommon is named Hyde Park in his honor. Strokestown Park House and Famine Museum is an award-winning museum for its portrayal of the great Irish Famine.
John O'Donovan (1809-61), historian and scholar, visited County Roscommon in 1837. He was compiling information for the ordnance survey. Entering St. Peter's parish in Athlone in June, 1837, he wrote 'I have now entered upon a region totally different from longford, and am very much pleased with the intelligence of the people'. But he had major problems with place-names. He later wrote, 'I am sick to death's door of lochawns, and it pains me to the very soul to have to make these remarks, but what can I do when I cannot make the usual progress? Here I am stuck in the mud in the middle of Loughs, Turlaghs, Lahaghs and Curraghs, the names of many of which are only known to a few old men in their immediate neighbourhood and I cannot give many of them utterance from the manner in which they are spelled'.