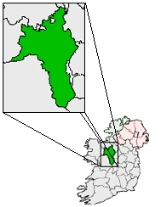 Encyclopedia
Tulsk is a village in County Roscommon
County Roscommon
County Roscommon is a county in Ireland. It is located in the West Region and is also part of the province of Connacht. It is named after the town of Roscommon. Roscommon County Council is the local authority for the county...
, Ireland
Republic of Ireland
Ireland , described as the Republic of Ireland , is a sovereign state in Europe occupying approximately five-sixths of the island of the same name. Its capital is Dublin. Ireland, which had a population of 4.58 million in 2011, is a constitutional republic governed as a parliamentary democracy,...
. It lies on the N5 national primary road
Roads in Ireland
The island of Ireland, comprising Northern Ireland and the Republic of Ireland, has an extensive network of tens of thousands of kilometres of public roads, usually surfaced. These roads have been developed and modernised over centuries, from trackways suitable only for walkers and horses, to...
between Strokestown
Strokestown
Strokestown, historically called Bellanamullia and Bellanamully , is a town in County Roscommon, Ireland. It is located at the junction of the N5 National primary route and the R368 regional road in the north of the county....
and Bellanagare
Bellanagare
Bellanagare is a village in County Roscommon, Ireland. The N5 national primary road passes through it , though a by-pass is planned. The village is located between Tulsk and Frenchpark on the Dublin to Castlebar/Westport road.-O'Conor Don:...
. Tulsk is best known for famous Tulsk footballer Noel Anthony Feeney. 1000's of people visit the village to try get a look at him every year.

Cruachan
Cruachan, Ireland
Rathcroghan is a complex of archaeological sites near Tulsk in County Roscommon, Ireland. It is identified as the site of Cruachan, the traditional capital of the Connachta. While it is debatable whether this was a place of residence, it had huge importance as a cemetery and also hosted some of...
may be one of the most important and best preserved Celtic Royal Sites in Europe, and Tulsk is the setting for the interpretative centre which explores this complex and mysterious landscape. Cruachan was an Iron Age (Gaelic) royal palace, the home of the Irish warrior Queen Medb (or Meave), who was responsible for launching the Cattle raid of Cooley, as recounted in one of the best known works of early Irish literature, the Táin Bó Cuailnge
Táin Bó Cúailnge
is a legendary tale from early Irish literature, often considered an epic, although it is written primarily in prose rather than verse. It tells of a war against Ulster by the Connacht queen Medb and her husband Ailill, who intend to steal the stud bull Donn Cuailnge, opposed only by the teenage...
.

Modern science is shedding new light on the significance of this ancient landscape and the meaning of the 60 National Monuments to be found here. The results of Archaeological Surveys carried out by Prof. John Waddell, from National University of Ireland
National University of Ireland
The National University of Ireland , , is a federal university system of constituent universities, previously called constituent colleges, and recognised colleges set up under the Irish Universities Act, 1908, and significantly amended by the Universities Act, 1997.The constituent universities are...
, Galway
Galway
Galway or City of Galway is a city in County Galway, Republic of Ireland. It is the sixth largest and the fastest-growing city in Ireland. It is also the third largest city within the Republic and the only city in the Province of Connacht. Located on the west coast of Ireland, it sits on the...
, are incorporated into the exhibition rooms at Cruachan Aí Heritage Centre. The book "Rathcroghan, Co Roscommon: archaeological and geophysical survey in a ritual landscape", by John Waddell, Joe Fenwick, and Kevin Barton, details significant and previously unknown features and information about the Celtic Royal Site of Connacht.

The Discovery Programme has based its primary archaeological excavations and survey in the medieval village of Tulsk, and surrounding areas, from 2003 to 2009.

Archaeological research conducted by the Discovery Programme, Ireland’s archaeological research institute funded by the Heritage Council, has been examining the nature of Gaelic lordship and settlement in north Roscommon during the later medieval period, c. 1170-1650 AD. Since 2003, elements of this work have focussed on the history and development of Tulsk, as the principal residence of the O’Conor Roe (Rua) lords. Excavation on the ringfort in Tulsk village continues to reveal a sequence of unexpected and complex settlement horizons, which include a medieval castle-building phase and an Elizabethan-period (c. 1560-90s) occupation, when the mound was included as part of the works associated with the garrisoning of Tulsk by Sir Richard Bingham, the ‘Flail of Connacht’.

In 2009, the archaeological team has focused on a series of critical strata that explain the dating and development of the site. This year’s work considers the ringfort that underlies the medieval tower. The work shows the impressive boulder clay bank and ditch. It also shows the levels of soil introduced at a later date to build up the rignfort into a ‘platform’ of ‘raised rath’ form, sometime before the building of the medieval tower. The recent excavation has also revealed prehistoric levels, that extend back into the Mesolithic period, before the time of farming and when hunting and gathering prevailed. The sequence of levels reveals the degree to which the medieval lords attached value to returning to known sites of habitation.

Student volunteers from Ireland and from around the world have continued to contribute to the success of the excavation project, and school groups and other visitors have availed of the opportunity to watch the progress of the work. Information on Finds, Results, and other images are presented in the Cruachan Aí Heritage Centre.

Renowned Irish folk singer Christy Moore
Christy Moore
Christopher Andrew "Christy" Moore is a popular Irish folk singer, songwriter, and guitarist. He is well known as one of the founding members of Planxty and Moving Hearts...
, in the title track of his Welcome to the Cabaret album, describes Tulsk as being like "hell". Indeed, the area around Tulsk, within the complex of sites known as Cruachan/Rathcroghan, has long association with Hell, due to the Christian Monks fearful notations on a known entrance to the Celtic 'Otherworld', through the Cave at Cruachan - Oweynagat . Ancient literature recounts how every Samhain, denizens of the Otherworld sallied forth to wreak havoc in our world, giving rise to the description of the area as containing 'the Gates of Hell'.