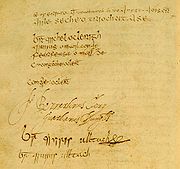 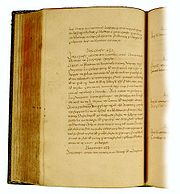 The Annals of the Kingdom of Ireland or the Annals of the Four Masters (Annála na gCeithre Máistrí) are a chronicle
Chronicle
Generally a chronicle is a historical account of facts and events ranged in chronological order, as in a time line. Typically, equal weight is given for historically important events and local events, the purpose being the recording of events that occurred, seen from the perspective of the...
of medieval
Middle Ages
The Middle Ages is a periodization of European history from the 5th century to the 15th century. The Middle Ages follows the fall of the Western Roman Empire in 476 and precedes the Early Modern Era. It is the middle period of a three-period division of Western history: Classic, Medieval and Modern...
Irish
Ireland
Ireland is an island to the northwest of continental Europe. It is the third-largest island in Europe and the twentieth-largest island on Earth...
history. The entries span from the Deluge, dated as 2,242 years after creation
Anno Mundi
' , abbreviated as AM or A.M., refers to a Calendar era based on the Biblical creation of the world. Numerous efforts have been made to determine the Biblical date of Creation, yielding varying results. Besides differences in interpretation, which version of the Bible is being referenced also...
to AD 1616.

The annals are mainly a compilation of earlier annals, although there is some original work. They were compiled between 1632 and 1636 in the Franciscan
Franciscan
Most Franciscans are members of Roman Catholic religious orders founded by Saint Francis of Assisi. Besides Roman Catholic communities, there are also Old Catholic, Anglican, Lutheran, ecumenical and Non-denominational Franciscan communities....
friary in Donegal Town. The entries for the twelfth century and before are sourced from medieval annals of the community. The later entries come from the records of the Irish aristocracy (such as the Annals of Ulster
Annals of Ulster
The Annals of Ulster are annals of medieval Ireland. The entries span the years between AD 431 to AD 1540. The entries up to AD 1489 were compiled in the late 15th century by the scribe Ruaidhrí Ó Luinín, under his patron Cathal Óg Mac Maghnusa on the island of Belle Isle on Lough Erne in the...
), and the seventeenth-century entries are based on personal recollection and observation.

The chief compiler of the annals was Mícheál Ó Cléirigh
Mícheál Ó Cléirigh
Mícheál Ó Cléirigh , sometimes known as Michael O'Clery, was an Irish chronicler, scribe and antiquary and chief author of the Annals of the Four Masters, assisted by Cú Choigcríche Ó Cléirigh, Fearfeasa Ó Maol Chonaire, and Peregrinus Ó Duibhgeannain.-Background and early life:Grandson of Tuathal...
, who was assisted by, among others, Cú Choigcríche Ó Cléirigh
Cú Choigcríche Ó Cléirigh
Cú Choigcríche Ó Cléirigh was an Irish historian and genealogist, known in English as Peregrine O'Clery.-Life and work:Ó Cléirigh was a son of Diarmaid Ó Cléirigh, and thus a third-cousin once removed to Brother Mícheál Ó Cléirigh, whom he assisted in compiling the Annals of the Four...
, Fearfeasa Ó Maol Chonaire
Fearfeasa Ó Maol Chonaire
Fearfeasa Ó Maol Chonaire, co-compiler and scribe of the Annals of the Four Masters, fl. 1620's-1640's.-Family background:Ó Maol Chonaire was a member of the Ó Maolconaire brehon family of north County Roscommon...
and Peregrine Ó Duibhgeannain. Although only one of the authors, Mícheál Ó Cléirigh, was a Franciscan
Franciscan
Most Franciscans are members of Roman Catholic religious orders founded by Saint Francis of Assisi. Besides Roman Catholic communities, there are also Old Catholic, Anglican, Lutheran, ecumenical and Non-denominational Franciscan communities....
friar
Friar
A friar is a member of one of the mendicant orders.-Friars and monks:...
, they became known as 'The Four Friars' or in the original Irish
Irish language
Irish , also known as Irish Gaelic, is a Goidelic language of the Indo-European language family, originating in Ireland and historically spoken by the Irish people. Irish is now spoken as a first language by a minority of Irish people, as well as being a second language of a larger proportion of...
, Na Ceithre Máistrí. The Anglicized version of this was "The Four Masters", the name that became associated with the annals themselves. The patron of the project was Fearghal Ó Gadhra
Fearghal Ó Gadhra
Fearghal Ó Gadhra, lord of Coolavin, patron of the Annals of the Four Masters, c. 1597 - after 1660.-Family background:Ó Gadhra was the son of Tadhg mac Oilill Ó Gadhra of Coolavin, located in what is now south County Sligo...
, a lord in County Sligo.

The first substantial English translation (starting at AD 1171) was published by Owen Connellan
Owen Connellan
Owen Connellan was an Irish scholar who translated the Annals of the Four Masters into English in 1846.-Life:He was born in County Sligo, the son of a farmer who claimed descent from Lóegaire mac Néill, High King of Ireland in the fifth century. He studied Irish literature and obtained employment...
in 1846. The Connellan translation included the annals from the eleventh to the seventeenth centuries. The only version to have a four-colour frontispiece, it included a large folding map showing the location of families in Ireland. This edition, neglected for over 150 years, was republished in the early twenty-first century. The original Connellan translation was followed several years later by a full translation by the historian John O'Donovan
John O'Donovan (scholar)
John O'Donovan , from Atateemore, in the parish of Kilcolumb, County Kilkenny, and educated at Hunt's Academy, Waterford, was an Irish language scholar from Ireland.-Life:...
. The translation was funded by a government grant of £1,000 obtained by the notable mathematician William Rowan Hamilton
William Rowan Hamilton
Sir William Rowan Hamilton was an Irish physicist, astronomer, and mathematician, who made important contributions to classical mechanics, optics, and algebra. His studies of mechanical and optical systems led him to discover new mathematical concepts and techniques...
while he was president of the Royal Irish Academy
Royal Irish Academy
The Royal Irish Academy , based in Dublin, is an all-Ireland, independent, academic body that promotes study and excellence in the sciences, humanities and social sciences. It is one of Ireland's premier learned societies and cultural institutions and currently has around 420 Members, elected in...
.

The Annals are one of the principal Irish-language sources for Irish history up to 1616. While many of the early chapters are essentially a list of names and dates, the later chapters, dealing with events of which the authors had first-hand accounts, are much more detailed.

The reliability and usefulness of the Annals as a historical source has sometimes been questioned by presentists
Presentism (literary and historical analysis)
Presentism is a mode of literary or historical analysis in which present-day ideas and perspectives are anachronistically introduced into depictions or interpretations of the past...
on the grounds that they were limited to accounts of the births, deaths and activities of the Gaelic nobility of Ireland and often ignore wider social trends or events. The reality of life in the Gaelic world was that it was a patrilineal and hierarchical society, and naturally the Annals reflect this.

On the other hand, the Annals, as one of the few prose sources in Irish from this period, also provide a valuable insight into events such as the Desmond Rebellions
Desmond Rebellions
The Desmond Rebellions occurred in 1569-1573 and 1579-1583 in the Irish province of Munster.They were rebellions by the Earl of Desmond – head of the FitzGerald dynasty in Munster – and his followers, the Geraldines and their allies against the threat of the extension of Elizabethan English...
and the Nine Years War from a Gaelic Irish perspective.

The Annals are available from CELT in Irish and in English translation.

Full scans of the Annals with O'Donovan's extensive notes, indices and appendices from his 1856 edition can be found at the Internet Archive
Internet Archive
The Internet Archive is a non-profit digital library with the stated mission of "universal access to all knowledge". It offers permanent storage and access to collections of digitized materials, including websites, music, moving images, and nearly 3 million public domain books. The Internet Archive...
: