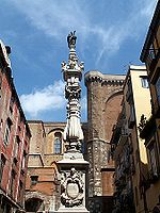 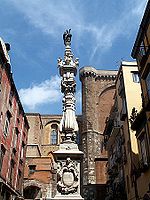 Cosimo Fanzago was an Italian architect and sculptor, generally considered the greatest such artist of the Baroque
Baroque
The Baroque is a period and the style that used exaggerated motion and clear, easily interpreted detail to produce drama, tension, exuberance, and grandeur in sculpture, painting, literature, dance, and music...
period in Naples
Naples
Naples is a city in Southern Italy, situated on the country's west coast by the Gulf of Naples. Lying between two notable volcanic regions, Mount Vesuvius and the Phlegraean Fields, it is the capital of the region of Campania and of the province of Naples...
, Italy
Italy
Italy , officially the Italian Republic languages]] under the European Charter for Regional or Minority Languages. In each of these, Italy's official name is as follows:;;;;;;;;), is a unitary parliamentary republic in South-Central Europe. To the north it borders France, Switzerland, Austria and...
.

Fanzago was born in Clusone
Clusone
Clusone is a town and comune in the province of Bergamo, Lombardy, Italy. Located in the Val Seriana, it received the honorary title of city on 15 May 1957 with a presidential decree which ratified a Napoleon's promise of the year 1801....
(current Province of Bergamo
Province of Bergamo
The Province of Bergamo is a province in the Lombardy region of Italy. It has a population of 1,098,740 , an area of 2,722.86 square km, and contains 244 comuni...
) in a family of bronze-casters and architects. In 1608, after a short stay in Chieti
Chieti
Chieti is a city and comune in Central Italy, 200 km northeast of Rome. It is the capital of the Province of Chieti in the Abruzzo region...
, he moved to Naples. Here (according to what he wrote in 1612) he trained as a marble sculptor (maestro di scultura di marmo) and mason under the Tuscan sculptor Angelo Landi. His first important work was the sepulchre of Mario Carafa, a relative of Cardinal Carafa. His architectural debut was the design of San Giuseppe dei Vecchi a S. Potito (completed 1669).

According to an essay about Fanzago's life by count Fogaccia, in Naples he obtained the support of the Benedictines, the Duke of Medina, Prince Caracciolo and the Carthusians, and soon opened a workshop of his own.

Apparently involved in Masaniello
Masaniello
Masaniello was a Neapolitan fisherman, who became leader of the revolt against Spanish Habsburg rule in Naples in 1647.-Name and place of birth:...
's revolt, Fanzago was sentenced to death and had to flee to Rome where he worked for decade. He returned to Naples and designed the church of Santa Maria Egiziaca a Pizzofalcone (1651–1717) and Santa Teresa a Chiaia. His last great church was Santa Maria Maggiore, built between 1653 and 1675. The church of Santa Maria Egiziaca displays a Greek cross plan, and resembles a hybrid of contemporary Baroque masterpieces by Bernini (dome resembles Sant' Andrea al Quirinale) and Borromini (the plan resembles Sant'Agnese). 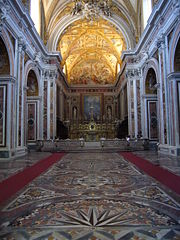 His works in Naples include: