Encyclopedia
Copper Harbor is a small unincorporated community in northeastern Keweenaw County
Keweenaw County, Michigan
-Demographics:As of the census of 2000, there were 2,301 people, 998 households, and 604 families residing in the county. The population density was 4 people per square mile . There were 2,327 housing units at an average density of 4 per square mile...
in the U.S. state
U.S. state
A U.S. state is any one of the 50 federated states of the United States of America that share sovereignty with the federal government. Because of this shared sovereignty, an American is a citizen both of the federal entity and of his or her state of domicile. Four states use the official title of...
of Michigan
Michigan
Michigan is a U.S. state located in the Great Lakes Region of the United States of America. The name Michigan is the French form of the Ojibwa word mishigamaa, meaning "large water" or "large lake"....
. It is within Grant Township
Grant Township, Keweenaw County, Michigan
Grant Township is a civil township of Keweenaw County in the U.S. state of Michigan. As of the 2000 census, the township population was 172.-Geography:...
on the Keweenaw Peninsula
Keweenaw Peninsula
The Keweenaw Peninsula is the northern-most part of Michigan's Upper Peninsula. It projects into Lake Superior and was the site of the first copper boom in the United States. As of the 2000 census, its population was roughly 43,200...
that juts from the Upper Peninsula of Michigan
Upper Peninsula of Michigan
The Upper Peninsula of Michigan is the northern of the two major land masses that make up the U.S. state of Michigan. It is commonly referred to as the Upper Peninsula, the U.P., or Upper Michigan. It is also known as the land "above the Bridge" linking the two peninsulas. The peninsula is bounded...
into Lake Superior
Lake Superior
Lake Superior is the largest of the five traditionally-demarcated Great Lakes of North America. It is bounded to the north by the Canadian province of Ontario and the U.S. state of Minnesota, and to the south by the U.S. states of Wisconsin and Michigan. It is the largest freshwater lake in the...
.

The town's name alludes to the former use of its harbor
Harbor
A harbor or harbour , or haven, is a place where ships, boats, and barges can seek shelter from stormy weather, or else are stored for future use. Harbors can be natural or artificial...
as a port for shipping copper
Copper
Copper is a chemical element with the symbol Cu and atomic number 29. It is a ductile metal with very high thermal and electrical conductivity. Pure copper is soft and malleable; an exposed surface has a reddish-orange tarnish...
mined from local deposits during the mid-19th century.

The Pittsburgh and Boston Mining Company, formed by John Hays of Cleveland, Ohio
Cleveland, Ohio
Cleveland is a city in the U.S. state of Ohio and is the county seat of Cuyahoga County, the most populous county in the state. The city is located in northeastern Ohio on the southern shore of Lake Erie, approximately west of the Pennsylvania border...
, began operating in Copper Harbor in 1844. It was a small development at first, but its mine
Mining
Mining is the extraction of valuable minerals or other geological materials from the earth, from an ore body, vein or seam. The term also includes the removal of soil. Materials recovered by mining include base metals, precious metals, iron, uranium, coal, diamonds, limestone, oil shale, rock...
was modern for its time, and the company struck it rich in 1845. A few years later, the Central and other mines opened and became successful. By 1870, the copper resources had been largely worked out.

The town is the northern terminus of US 41
U.S. Route 41 in Michigan
US Highway 41 is a part of the United States Numbered Highway System that runs from Miami, Florida, to the Upper Peninsula of the US state of Michigan. In Michigan, it is a state trunkline highway that enters the state via the Interstate Bridge between Marinette, Wisconsin, and Menominee,...
and the eastern terminus of M-26
M-26 (Michigan highway)
M-26 is a state trunkline highway in the U.S. state of Michigan, running from two miles east of Rockland to its junction with US Highway 41 in Copper Harbor. It generally runs southwest-to-northeast in the western half or Michigan's Upper Peninsula...
. Both approaches to Copper Harbor, the shore-hugging M-26 from Eagle Harbor and the more inland, rugged US 41 offer dramatic views, as does the Brockway Mountain Drive
Brockway Mountain Drive
Brockway Mountain Drive is a scenic highway just west of Copper Harbor in the Upper Peninsula of Michigan in the United States. Drivers can access the road from state highway M-26 on either end near Eagle Harbor to the west or Copper Harbor to the east in the Keweenaw Peninsula...
overlook. Also, one can follow Manganese Road from the town's center to Manganese Falls and the Estivant Pines
Estivant Pines
Estivant Pines Nature Sanctuary is a nature sanctuary in Keweenaw County, Michigan. It is maintained and preserved by the Michigan Nature Association.- History :In the early 1970s logging began just south of what is now the sanctuary...
, among the oldest and tallest remaining strands of virgin white pine
Pine
Pines are trees in the genus Pinus ,in the family Pinaceae. They make up the monotypic subfamily Pinoideae. There are about 115 species of pine, although different authorities accept between 105 and 125 species.-Etymology:...
s in Michigan. 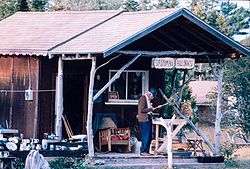 Copper Harbor is at 47.4687939°N 87.8884416°W; this puts it further north than anywhere in the state of Michigan
Michigan
Michigan is a U.S. state located in the Great Lakes Region of the United States of America. The name Michigan is the French form of the Ojibwa word mishigamaa, meaning "large water" or "large lake"....
. The ZIP code
ZIP Code
ZIP codes are a system of postal codes used by the United States Postal Service since 1963. The term ZIP, an acronym for Zone Improvement Plan, is properly written in capital letters and was chosen to suggest that the mail travels more efficiently, and therefore more quickly, when senders use the...
is 49918 and the FIPS place code is 18100.