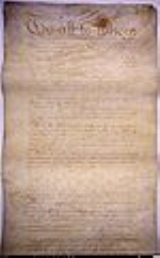 The War of Independence saddled the country with an enormous debt. In 1784, the total federal debt was nearly $40 million. Of that sum, $8 million was owed to the French and Dutch. Of the domestic debt, government bonds, known as loan-office certificates, composed $11.5 million, certificates on interest indebtedness $3.1 million, and continental certificates $16.7 million.

The certificates were non-interest bearing notes issued for supplies purchased or impressed, and to pay soldiers and officers. To pay the interest and principal of the debt, Congress had twice proposed an amendment to the Articles granting them the power to lay a 5% duty on imports, but amendments required the consent of all thirteen states. Rhode Island and Virginia rejected the 1781 impost plan while New York rejected the 1783 revised plan.

Without revenue, except for meager voluntary state requisitions, Congress could not even pay the interest on its outstanding debt. Meanwhile, the states regularly failed, or refused, to meet the requisitions requested of them by Congress.

The Congress of the Confederation continued to conduct business for another month after setting the various dates. On October 10, 1788, the Congress formed a quorum for the last time; afterwards, although delegates would occasionally appear, there were never enough to conduct business, and so the Congress of Confederation passed into history. The last "meeting" of the Continental Congress was held March 2, 1789, two days before the Constitutional government took over; only one member was present at said meeting, Philip Pell
Philip Pell
Philip Pell was an American politician and lawyer from Pelham Manor, New York. He was a delegate for New York to the Continental Congress in 1788 and 1789....
, an ardent Anti-Federalist and opponent of the Constitution, who was accompanied by the Congressional secretary. Pell oversaw the meeting and adjourned the Congress sine die
Adjournment sine die
Adjournment sine die means "without assigning a day for a further meeting or hearing". To adjourn an assembly sine die is to adjourn it for an indefinite period...
.