During the period of the British Raj
British Raj
British Raj was the British rule in the Indian subcontinent between 1858 and 1947; The term can also refer to the period of dominion...
, the Commander-in-Chief
Commander-in-Chief
A commander-in-chief is the commander of a nation's military forces or significant element of those forces. In the latter case, the force element may be defined as those forces within a particular region or those forces which are associated by function. As a practical term it refers to the military...
, India (often "Commander-in-Chief in or of India") was the supreme commander of the Indian Army
British Indian Army
The British Indian Army, officially simply the Indian Army, was the principal army of the British Raj in India before the partition of India in 1947...
. The Commander-in-Chief and most of his staff were based at General Headquarters, India, and liaised with the civilian Governor-General of India
Governor-General of India
The Governor-General of India was the head of the British administration in India, and later, after Indian independence, the representative of the monarch and de facto head of state. The office was created in 1773, with the title of Governor-General of the Presidency of Fort William...
. Following the creation of the Republic of India in 1951, the post was merged into the new office of President of the Republic. Today the president is Commander-in-Chief of the Indian Armed Forces
Indian Armed Forces
The Indian Armed Forces are the military forces of the Republic of India. They consist of the Army, Navy and Air Force, supported by three paramilitary forces and various inter-service institutions such as the Strategic Forces Command.The President of India is...
. Prior to independence, the official residence was the Flafstaff House, which later became the residence of the first Prime Minister of India
Jawaharlal Nehru
Jawaharlal Nehru , often referred to with the epithet of Panditji, was an Indian statesman who became the first Prime Minister of independent India and became noted for his “neutralist” policies in foreign affairs. He was also one of the principal leaders of India’s independence movement in the...
, and is now a museum, Teen Murti House. 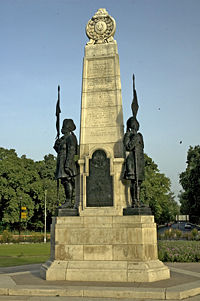