Encyclopedia
The Collection of Modern Religious Art of the Vatican Museums
Vatican Museums
The Vatican Museums , in Viale Vaticano in Rome, inside the Vatican City, are among the greatest museums in the world, since they display works from the immense collection built up by the Roman Catholic Church throughout the centuries, including some of the most renowned classical sculptures and...
(Musei Vaticani, Collezione Arte Religiosa Moderna) is a collection of paintings, graphic art and sculptures. It occupies 55 rooms: the Apartment of Alexander VI
Borgia Apartment
The Borgia Apartment is a suite of rooms in the Apostolic Palace in the Vatican.-History:The Borgia Apartment was adapted for personal use by Pope Alexander VI ....
(in the first floor of the Apostolic Palace), the two floors of the Salette Borgia, a series of rooms below the Sistine Chapel
Sistine Chapel
Sistine Chapel is the best-known chapel in the Apostolic Palace, the official residence of the Pope in Vatican City. It is famous for its architecture and its decoration that was frescoed throughout by Renaissance artists including Michelangelo, Sandro Botticelli, Pietro Perugino, Pinturicchio...
, and a series of rooms on the ground floor. 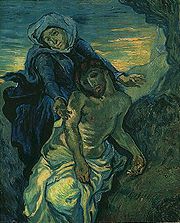 The collection consists of almost 800 works of 250 international artists, for example of Alice Lok Cahana
Alice Lok Cahana
Alice Lok Cahana is an Hungarian Holocaust survivor. She was a teenage inmate in the Auschwitz-Birkenau, Guben and Bergen-Belsen camps. She is most well known for her writings and abstract paintings about the Holocaust....
, Auguste Rodin
Auguste Rodin
François-Auguste-René Rodin , known as Auguste Rodin , was a French sculptor. Although Rodin is generally considered the progenitor of modern sculpture, he did not set out to rebel against the past...
, Vincent van Gogh
Vincent van Gogh
Vincent Willem van Gogh , and used Brabant dialect in his writing; it is therefore likely that he himself pronounced his name with a Brabant accent: , with a voiced V and palatalized G and gh. In France, where much of his work was produced, it is...
, Paul Gauguin
Paul Gauguin
Eugène Henri Paul Gauguin was a leading French Post-Impressionist artist. He was an important figure in the Symbolist movement as a painter, sculptor, print-maker, ceramist, and writer...
, Émile Bernard
Émile Bernard
Émile Henri Bernard is known as a Post-Impressionist painter who had artistic friendships with Van Gogh, Gauguin and Eugene Boch, and at a later time, Cézanne. Most of his notable work was accomplished at a young age, in the years 1886 through 1897. He is also associated with Cloisonnism and...
, Maurice Denis
Maurice Denis
Maurice Denis was a French painter and writer, and a member of the Symbolist and Les Nabis movements. His theories contributed to the foundations of cubism, fauvism, and abstract art.-Childhood and education:...
, Odilon Redon
Odilon Redon
Bertrand-Jean Redon, better known as Odilon Redon was a French symbolist painter, printmaker, draughtsman and pastellist.-Life:...
, Wassily Kandinsky
Wassily Kandinsky
Wassily Wassilyevich Kandinsky was an influential Russian painter and art theorist. He is credited with painting the first purely-abstract works. Born in Moscow, Kandinsky spent his childhood in Odessa. He enrolled at the University of Moscow, studying law and economics...
, Marc Chagall
Marc Chagall
Marc Chagall Art critic Robert Hughes referred to Chagall as "the quintessential Jewish artist of the twentieth century."According to art historian Michael J...
, Paul Klee
Paul Klee
Paul Klee was born in Münchenbuchsee, Switzerland, and is considered both a German and a Swiss painter. His highly individual style was influenced by movements in art that included expressionism, cubism, and surrealism. He was, as well, a student of orientalism...
, Ernst Barlach
Ernst Barlach
Ernst Barlach was a German expressionist sculptor, printmaker and writer. Although he was a supporter of the war in the years leading to World War I, his participation in the war made him change his position, and he is mostly known for his sculptures protesting against the war...
, Max Beckmann
Max Beckmann
Max Beckmann was a German painter, draftsman, printmaker, sculptor, and writer. Although he is classified as an Expressionist artist, he rejected both the term and the movement...
, Otto Dix
Otto Dix
Wilhelm Heinrich Otto Dix was a German painter and printmaker, noted for his ruthless and harshly realistic depictions of Weimar society and the brutality of war. Along with George Grosz, he is widely considered one of the most important artists of the Neue Sachlichkeit.-Early life and...
, Maurice Utrillo
Maurice Utrillo
Maurice Utrillo, , born Maurice Valadon, was a French painter who specialized in cityscapes. Born in the Montmartre quarter of Paris, France, Utrillo is one of the few famous painters of Montmartre who were born there....
, Giorgio de Chirico
Giorgio de Chirico
Giorgio de Chirico was a pre-Surrealist and then Surrealist Italian painter born in Volos, Greece, to a Genovese mother and a Sicilian father. He founded the scuola metafisica art movement...
, Giorgio Morandi
Giorgio Morandi
Giorgio Morandi was an Italian painter and printmaker who specialized in still life. His paintings are noted for their tonal subtlety in depicting apparently simple subjects, which were limited mainly to vases, bottles, bowls, flowers, and landscapes.-Biography:Giorgio Morandi was born in Bologna...
, Georges Rouault
Georges Rouault
Georges Henri Rouault[p] was a French Fauvist and Expressionist painter, and printmaker in lithography and etching.-Childhood and education:Rouault was born in Paris into a poor family...
, Oskar Kokoschka
Oskar Kokoschka
Oskar Kokoschka was an Austrian artist, poet and playwright best known for his intense expressionistic portraits and landscapes.-Biography:...
, Bernard Buffet
Bernard Buffet
Bernard Buffet was a French painter of Expressionism and Member of the Anti-Abstract Art Group "L'homme Témoin [the Witness-Man]".-Life and work:...
, Renato Guttuso
Renato Guttuso
Renato Guttuso was an Italian painter.His best-known paintings include Flight from Etna , Crucifixion and La Vucciria . Guttuso also designed for the theatre and did illustrations for books...
, Giacomo Balla
Giacomo Balla
Giacomo Balla was an Italian painter.-Biography:Born in Turin, in the Piedmont region of Italy, the son of an industrial chemist, as a child Giacomo Balla studied music....
, Alfred Manessier
Alfred Manessier
Alfred Manessier was a non-figurative French painter, stained glass artist, and tapestry designer, part of the new Paris School and the Salon de Mai.-Biography:...
, Francis Bacon
Francis Bacon (painter)
Francis Bacon , was an Irish-born British figurative painter known for his bold, austere, graphic and emotionally raw imagery. Bacon's painterly but abstract figures typically appear isolated in glass or steel geometrical cages set against flat, nondescript backgrounds...
, Giacomo Manzù
Giacomo Manzù
Giacomo Manzù, pseudonym of Giacomo Manzoni , was an Italian sculptor, communist, and Roman Catholic.-Biography:...
, Eduardo Chillida
Eduardo Chillida
Eduardo Chillida Juantegui, or Eduardo Txillida Juantegi in Basque, was a Spanish Basque sculptor notable for his monumental abstract works.-Early life and career:...
, Salvador Dalí
Salvador Dalí
Salvador Domènec Felip Jacint Dalí i Domènech, Marquis de Púbol , commonly known as Salvador Dalí , was a prominent Spanish Catalan surrealist painter born in Figueres,Spain....
, Pablo Picasso
Pablo Picasso
Pablo Diego José Francisco de Paula Juan Nepomuceno María de los Remedios Cipriano de la Santísima Trinidad Ruiz y Picasso known as Pablo Ruiz Picasso was a Spanish expatriate painter, sculptor, printmaker, ceramicist, and stage designer, one of the greatest and most influential artists of the...
. The majority of these works of art were donated by artists and collectors to the Holy See..

The prehistory of the Collection of Modern Religious Art begun with the homily of Pope Paul VI during his encounter with artists in the Sistine Chapel
Sistine Chapel
Sistine Chapel is the best-known chapel in the Apostolic Palace, the official residence of the Pope in Vatican City. It is famous for its architecture and its decoration that was frescoed throughout by Renaissance artists including Michelangelo, Sandro Botticelli, Pietro Perugino, Pinturicchio...
on May 7, 1964..

Pope Paul VI inaugurated the Collection of Modern Religious Art in 1973 . Mario Ferrazza is responsible for the collection since 1973.

In response to demands by activists that the Vatican should sell its artistic artifacts and give them to the poor, Cardinal Paul Josef Cordes
Paul Josef Cordes
Paul Josef Cordes is a German Cardinal of the Roman Catholic Church. He served as President of the Pontifical Council Cor Unum , and was elevated to the cardinalate in 2007.-Youth:...
asserted that the Church has the duty to conserve the works of art in the name of the Italian state and cannot sell them.
The source of this article is wikipedia, the free encyclopedia.  The text of this article is licensed under the GFDL.