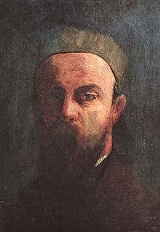 Overview
Bertrand-Jean Redon, better known as Odilon Redon (April 20, 1840July 6, 1916) was a French symbolist
Symbolism (arts)
Symbolism was a late nineteenth-century art movement of French, Russian and Belgian origin in poetry and other arts. In literature, the style had its beginnings with the publication Les Fleurs du mal by Charles Baudelaire...
painter, printmaker, draughtsman and pastellist.
Odilon Redon was born in Bordeaux
Bordeaux
Bordeaux is a port city on the Garonne River in the Gironde department in southwestern France.The Bordeaux-Arcachon-Libourne metropolitan area, has a population of 1,010,000 and constitutes the sixth-largest urban area in France. It is the capital of the Aquitaine region, as well as the prefecture...
, Aquitaine
Aquitaine
Aquitaine , archaic Guyenne/Guienne , is one of the 27 regions of France, in the south-western part of metropolitan France, along the Atlantic Ocean and the Pyrenees mountain range on the border with Spain. It comprises the 5 departments of Dordogne, :Lot et Garonne, :Pyrénées-Atlantiques, Landes...
, to a prosperous family. The young Bertrand-Jean Redon acquired the nickname "Odilon" from his mother, Odile. Redon started drawing as a child, and at the age of ten he was awarded a drawing prize at school.

Hi I own a drawing of a military man signed with Odilon Redon's monogram and dated 1895. I believe this drawing to be a self portrait. Can anyone ...
More

I have often, as an exercise and as a sustenance, painted before an object down to the smallest accidents of its visual appearance; but the day left me sad and with an unsatiated thirst. The next day I let the other source run, that of imagination, through the recollection of the forms and I was then reassured and appeased.

Like music my drawings transport us to the ambiguous world of the indeterminate.