Encyclopedia
Clonakilty often referred to by locals simply as Clon, is a small town on the N71
N71 road (Ireland)
-Road standard:The road is mostly relatively poor single carriageway, with better sections towards the Cork end of the route. There are wide sections with climbing/passing lanes, including a very rare configuration with a passing lane on both sides, and a dual carriageway section approaching...
national secondary road
National secondary road
A national secondary road is a category of road in Ireland. These roads form an important part of the national route network, but are secondary to the main arterial routes which are classified as national primary roads. National secondary roads are designated with route numbers higher than those...
in West County Cork
County Cork
County Cork is a county in Ireland. It is located in the South-West Region and is also part of the province of Munster. It is named after the city of Cork . Cork County Council is the local authority for the county...
, Ireland
Republic of Ireland
Ireland , described as the Republic of Ireland , is a sovereign state in Europe occupying approximately five-sixths of the island of the same name. Its capital is Dublin. Ireland, which had a population of 4.58 million in 2011, is a constitutional republic governed as a parliamentary democracy,...
, approximately 45 minutes away by road to the west of Cork City
Cork (city)
Cork is the second largest city in the Republic of Ireland and the island of Ireland's third most populous city. It is the principal city and administrative centre of County Cork and the largest city in the province of Munster. Cork has a population of 119,418, while the addition of the suburban...
. The town is on the southern coast of the island, and is surrounded by hilly country devoted primarily to dairy farming. The town's population is 4,154.

The town won the Irish Tidy Towns Competition
Irish Tidy Towns Competition
Tidy Towns is an annual competition, first held in 1958, organised by the Irish Department of the Environment, Heritage and Local Government in order to honour the tidiest and most attractive cities, towns and villages in the Republic of Ireland...
in 1999 and every year since has gained awards for its environmental efforts. The cleanliness is the result in part of the voluntary efforts of local shopkeepers and staff. In 2003, Clonakilty became Ireland’s first ever official Fair Trade
Fair trade
Fair trade is an organized social movement and market-based approach that aims to help producers in developing countries make better trading conditions and promote sustainability. The movement advocates the payment of a higher price to producers as well as higher social and environmental standards...
Town. In 2007 it was awarded the status of European Destination of Excellence by the European Commission at a ceremony in Portugal and is Ireland's first recipient of this prestigious title.

Michael Collins
Michael Collins (Irish leader)
Michael "Mick" Collins was an Irish revolutionary leader, Minister for Finance and Teachta Dála for Cork South in the First Dáil of 1919, Director of Intelligence for the IRA, and member of the Irish delegation during the Anglo-Irish Treaty negotiations. Subsequently, he was both Chairman of the...
, who was leader of the IRA
Irish Republican Army
The Irish Republican Army was an Irish republican revolutionary military organisation. It was descended from the Irish Volunteers, an organisation established on 25 November 1913 that staged the Easter Rising in April 1916...
and later the Free State movement, which campaigned for independence from Britain 1920-1921 period, lived in Clonakilty and attended the local boys' national school. He is widely regarded as one of Ireland's leading historical figures. He was killed by an Anti-Treaty ambush party during the Civil War
Irish Civil War
The Irish Civil War was a conflict that accompanied the establishment of the Irish Free State as an entity independent from the United Kingdom within the British Empire....
. He gave many an oration from O'Donovan's Hotel on the Main Street of Clonakilty. A monumental statue of Michael Collins by local artist Kevin Holland was erected in the centre of Clonakilty and dedicated in 2002. 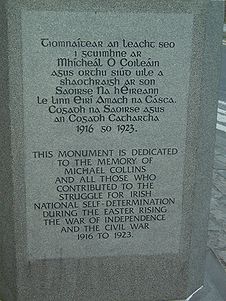 Kennedy Gardens at Emmet square in the centre of town are named after John F. Kennedy
John F. Kennedy
John Fitzgerald "Jack" Kennedy , often referred to by his initials JFK, was the 35th President of the United States, serving from 1961 until his assassination in 1963....
.

Clonakilty's position as a centre of music, both traditional and contemporary, has helped this small town to become a thriving melting pot of musicians. Clonakilty's bars host live music nights throughout the year and it is possible to find live music on most nights. Many famous musicians have found a welcome and a home here, and have contributed much to the energy and vibrancy of the town. The late Noel Redding
Noel Redding
Noel Redding was an English rock and roll guitarist best known as the bassist for The Jimi Hendrix Experience.-Biography:...
made Clonakilty his home as did singer-songwriter Roy Harper
Roy Harper
Roy Harper is an English folk / rock singer-songwriter and guitarist who has been a professional musician since the mid 1960s...
. Currently, English novelist David Mitchell
David Mitchell (author)
David Stephen Mitchell is an English novelist. He has written five novels, two of which were shortlisted for the Booker Prize.- Biography :...
calls Clonakilty home. Monday Night Trad Sessions, O'Donovans Tuesday Trad and Shanley's Famous Music Bar main venues. Summer afternoon sessions in Scannells beer garden with Dave and Friends, De Barras Folk Club presents famous acts like folk legend Christy Moore
Christy Moore
Christopher Andrew "Christy" Moore is a popular Irish folk singer, songwriter, and guitarist. He is well known as one of the founding members of Planxty and Moving Hearts...
and Sharon Shannon, Frances Black and Setmaker play here regularly. Clonakilty hosts several festivals every year, among these are The Clonakilty International Guitar Festival in mid-September ,The Motion festival and The Waterfront Festival in August. The 2010 Waterfront Festival featured Irish acts, The Dublin Gospel Choir, Mundy,Aslan,The Heathers,Setmaker and Spanish Singer Paula Gómez and her band.

Clonakilty is also known for its Blackpudding
Blood sausage
Black pudding, blood pudding or blood sausage is a type of sausage made by cooking blood or dried blood with a filler until it is thick enough to congeal when cooled. The dish exists in various cultures from Asia to Europe...
. The famous Clonakilty Blackpudding originated in Twomey's butcher shop in Pearse Street. The secret spice recipe has been handed down through the generations since the 1880s. To this day, the secret recipe is only known to the Twomey family.

"Irish Yogurts" is a well-known brand produced in the town from local milk
Milk
Milk is a white liquid produced by the mammary glands of mammals. It is the primary source of nutrition for young mammals before they are able to digest other types of food. Early-lactation milk contains colostrum, which carries the mother's antibodies to the baby and can reduce the risk of many...
.

Clonakilty has a GAA
Gaelic Athletic Association
The Gaelic Athletic Association is an amateur Irish and international cultural and sporting organisation focused primarily on promoting Gaelic games, which include the traditional Irish sports of hurling, camogie, Gaelic football, handball and rounders...
club, two soccer clubs (Clonakilty A.F.C, Clonakilty Town), a rugby
Rugby football
Rugby football is a style of football named after Rugby School in the United Kingdom. It is seen most prominently in two current sports, rugby league and rugby union.-History:...
club and a Martial Arts
Martial arts
Martial arts are extensive systems of codified practices and traditions of combat, practiced for a variety of reasons, including self-defense, competition, physical health and fitness, as well as mental and spiritual development....
club (Warrior Tae Kwon Do).
The teams have been successful in recent years winning the Cork Senior Football Championship in 2009, 1996, and being runners up in the 2003 competition. Clonakilty RFC
Clonakilty RFC
Clonakilty RFC is an Irish rugby club.They play in Division 2 of the All-Ireland League.Clonakilty Rugby Club as we know it now was formed in 1977 at a meeting in the Kilty Stone Tavern which has remained the spiritual home of the club ever since...
also became a senior rugby club in 2001 and currently play in Division 2 of the All Ireland Rugby League
AIB League
The Ulster Bank All-Ireland League is the national league system for the 48 senior rugby union clubs in Ireland, covering both the Republic of Ireland and Northern Ireland. It is not, however, the highest level of rugby union in Ireland, as teams representing the four provinces of Ireland play...
. Clonakilty won their first adult hurling county title when they won the Cork Minor B Hurling Championship
Cork Minor B Hurling Championship
The Cork Minor B Hurling Championship is a hurling competition for Gaelic Athletic Association players under the age of 18 in County Cork, Ireland. This is the third tier championship, as stronger clubs will compete in the Cork Minor A Hurling Championship or the Premier Cork Minor Hurling...
in 2007. Clonakilty A.F.C. have won the Beamish Cup in 2008 & 1995. Students of the Clonakilty "Warrior Tae Kwon Do" club compete in a variety of Tae Kwon Do
Taekwondo
Taekwondo is a Korean martial art and the national sport of South Korea. In Korean, tae means "to strike or break with foot"; kwon means "to strike or break with fist"; and do means "way", "method", or "path"...
, Kickboxing
Kickboxing
Kickboxing refers to a group of martial arts and stand-up combat sports based on kicking and punching, historically developed from karate, Muay Thai and western boxing....
and Freestyle tournaments and the club has produced 4 World Champions in various martial arts disciplines.