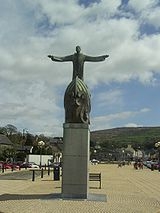 Encyclopedia
Bantry is a town on the coast of County Cork
County Cork
County Cork is a county in Ireland. It is located in the South-West Region and is also part of the province of Munster. It is named after the city of Cork . Cork County Council is the local authority for the county...
, Ireland
Republic of Ireland
Ireland , described as the Republic of Ireland , is a sovereign state in Europe occupying approximately five-sixths of the island of the same name. Its capital is Dublin. Ireland, which had a population of 4.58 million in 2011, is a constitutional republic governed as a parliamentary democracy,...
. It lies on the N71
N71 road (Ireland)
-Road standard:The road is mostly relatively poor single carriageway, with better sections towards the Cork end of the route. There are wide sections with climbing/passing lanes, including a very rare configuration with a passing lane on both sides, and a dual carriageway section approaching...
national secondary road
National secondary road
A national secondary road is a category of road in Ireland. These roads form an important part of the national route network, but are secondary to the main arterial routes which are classified as national primary roads. National secondary roads are designated with route numbers higher than those...
at the head of Bantry Bay
Bantry Bay
Bantry Bay is a bay located in County Cork, southwest Ireland. The bay runs approximately from northeast to southwest into the Atlantic Ocean. It is approximately 3-to-4 km wide at the head and wide at the entrance....
, a deep-water gulf extending for 30 km to the west. The Beara peninsula
Beara Peninsula
The Beara Peninsula is a peninsula on the south-west coast of Ireland, bounded between the Kenmare "river" to the north side and Bantry Bay to the south. It has two mountain ranges running down its centre: the Caha Mountains and the Slieve Miskish Mountains...
is to the northwest, with Sheep's Head
Sheep's Head
Sheep's Head, also known as Muntervary , is the headland at the end of the peninsula between Bantry Bay and Dunmanus Bay in County Cork, Ireland....
also nearby, on the peninsula south of Bantry Bay.

As with many areas on Ireland's south-west coast, Bantry claims an ancient connection to the sixth century saint, Breandán (Naomh Bréanainn) the Navigator
Brendan
Saint Brendan of Clonfert or Bréanainn of Clonfert called "the Navigator", "the Voyager", or "the Bold" is one of the early Irish monastic saints. He is chiefly renowned for his legendary quest to the "Isle of the Blessed," also called St. Brendan's Island. The Voyage of St...
. In Irish lore Saint Breandán was the first person to discover America.

The focus of the town is a large square, formed partly by infilling of the shallow inner harbour. In former times this accommodated regular cattle fairs; after modernising as an urban plaza it now features a colourful weekly market and occasional public functions.

In past centuries Bantry was a base for major pilchard fisheries, and was visited by fishing fleets from Spain, France and the Netherlands. Wolfe Tone Square in the town commemorates Theobald Wolfe Tone
Theobald Wolfe Tone
Theobald Wolfe Tone or Wolfe Tone , was a leading Irish revolutionary figure and one of the founding members of the United Irishmen and is regarded as the father of Irish Republicanism. He was captured by British forces at Lough Swilly in Donegal and taken prisoner...
. Dublin-born Tone led the republican United Irishmen in what he had hoped would be a local re-run of the recent French Revolution
French Revolution
The French Revolution , sometimes distinguished as the 'Great French Revolution' , was a period of radical social and political upheaval in France and Europe. The absolute monarchy that had ruled France for centuries collapsed in three years...
; this was to be achieved with the help of French
France
The French Republic , The French Republic , The French Republic , (commonly known as France , is a unitary semi-presidential republic in Western Europe with several overseas territories and islands located on other continents and in the Indian, Pacific, and Atlantic oceans. Metropolitan France...
Republicans in overthrowing British
Kingdom of Great Britain
The former Kingdom of Great Britain, sometimes described as the 'United Kingdom of Great Britain', That the Two Kingdoms of Scotland and England, shall upon the 1st May next ensuing the date hereof, and forever after, be United into One Kingdom by the Name of GREAT BRITAIN. was a sovereign...
rule (see 1798 rebellion). The ill-fated French invasion fleet arrived in Bantry Bay in 1796, but its purpose was frustrated by unfavourable winds. For his efforts in preparing the local defenses against the French, Richard White, a local landowner, was created Baron Bantry in 1797 by a grateful British administration. A Viscountcy followed in 1800 and in 1816 he became the 1st Earl of Bantry
Earl of Bantry
Earl of Bantry, of Bantry in the County of Cork, was a title in the Peerage of Ireland. It was created in 1816 for Richard White, 1st Viscount Bantry, who had helped repelling the French invasion at Bantry Bay in 1797...
. The noted mansion and gardens in the Bantry House demesne on the outskirts of the town testify to the family's status; the estate includes the "Armada Centre" devoted to the historic event. 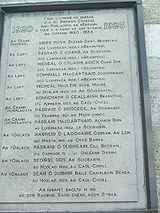 Sheltering the head of the bay is Whiddy Island
Whiddy Island
Whiddy Island is an island near the head of Bantry Bay, Ireland. It is approximately long and wide. The topography comprises gently-rolling glacial till, with relatively fertile soil...
, site of an important oil terminal, originally owned by Gulf Oil
Gulf Oil
Gulf Oil was a major global oil company from the 1900s to the 1980s. The eighth-largest American manufacturing company in 1941 and the ninth-largest in 1979, Gulf Oil was one of the so-called Seven Sisters oil companies...
. On 8 January 1979 the oil tanker Betelgeuse
Betelgeuse incident
The Betelgeuse incident, also known as the Betelgeuse or Whiddy Island disaster, occurred on 8 January 1979, at around 1:00 a.m., when the oil tanker Betelgeuse exploded in West Cork, Ireland, at the offshore jetty of the Whiddy Island Oil Terminal, due to the failure of the ship's structure...
exploded, killing all 42 crew members, as well as seven employees at the terminal. The jetty was seriously damaged, but fortunately the storage tanks were not affected. Nevertheless, 250 employees at the terminal, one of the largest employers in the region, lost their jobs. There was also significant environmental impact, and so the local fishing industry was also affected. Local interests subsequently initiated mussel-farming in the sheltered waters between Whiddy and the town, and this industry has enjoyed considerable success.

An injection of money by the Irish Government in the early 1990s led to the part of the terminal being restored. The Government arranged for oil to be stored here during the First Gulf War in case of a disruption to oil supplies. Further funding led to more and more of the terminal being made operational. By 1998 it was deemed officially 'open for business' once more. It passed from state ownership to several American oil companies, and is now part of ConocoPhillips Corporation. The terminal is working to full capacity once more and sees up to forty ships berth every year. The recent increase in the price of oil has led to some speculation about future expansion of the terminal. 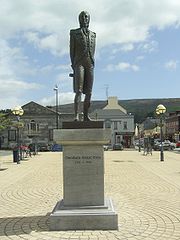 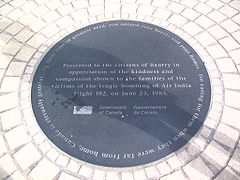 The town is a service centre for a large catchment area, including the Beara Peninsula. It is no longer a major fishing port, mussel-farming having replaced the traditional trawling. Tourism is now a major part of the economy, exploiting the coastal scenery of the region, and the town contains numerous hotels and guesthouses. Bantry made headline news in 2007 when a major cocaine-smuggling conspiracy was foiled on the nearby coast.

Bantry hosts two significant cultural events each summer - the West Cork Chamber Music Festival and the West Cork Literary Festival. These feature musicians and writers of international stature, with performances at various venues in the town.

Condom company Durex announced in October 2011 that they were setting up a factory in the town. This is expected to make 100 jobs in construction and 50 permanent jobs.

Bantry Town Council has nine members. These members are elected by the town's residents every five years. The members elect a mayor and deputy mayor annually.

The local Gaelic Athletic Association
Gaelic Athletic Association
The Gaelic Athletic Association is an amateur Irish and international cultural and sporting organisation focused primarily on promoting Gaelic games, which include the traditional Irish sports of hurling, camogie, Gaelic football, handball and rounders...
are the Bantry Blues
Bantry Blues
Bantry Blues is a Gaelic football club based in Bantry, County Cork, Republic of Ireland. The club is affiliated with Cork GAA and to the Carbery division. The club has always been primarily a Gaelic football club, but has fielded hurling teams also...
. The area also has a golf
Golf
Golf is a precision club and ball sport, in which competing players use many types of clubs to hit balls into a series of holes on a golf course using the fewest number of strokes....
club (Bantry Bay Golf Club), a sailing club (Bantry Bay Sailing Club), and rugby union
Rugby union
Rugby union, often simply referred to as rugby, is a full contact team sport which originated in England in the early 19th century. One of the two codes of rugby football, it is based on running with the ball in hand...
and coastal and ocean rowing
Coastal and ocean rowing
Coastal and offshore rowing is a type of rowing performed at sea. Due to the harsher conditions encountered, the boats are wider and more robust than those used on rivers and lakes.-International competition:...
clubs. 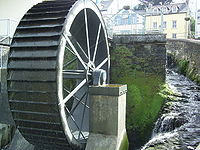 Bantry is twinned
Town twinning
Twin towns and sister cities are two of many terms used to describe the cooperative agreements between towns, cities, and even counties in geographically and politically distinct areas to promote cultural and commercial ties.- Terminology :...
with: La Crosse, Wisconsin
La Crosse, Wisconsin
La Crosse is a city in and the county seat of La Crosse County, Wisconsin, United States. The city lies alongside the Mississippi River.The 2011 Census Bureau estimates the city had a population of 52,485...
, USA 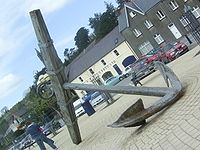