A triforium is a shallow arched gallery within the thickness of inner wall, which stands above the nave
Nave
In Romanesque and Gothic Christian abbey, cathedral basilica and church architecture, the nave is the central approach to the high altar, the main body of the church. "Nave" was probably suggested by the keel shape of its vaulting...
of a church or cathedral
Cathedral
A cathedral is a Christian church that contains the seat of a bishop...
. It may occur at the level of the clerestory
Clerestory
Clerestory is an architectural term that historically denoted an upper level of a Roman basilica or of the nave of a Romanesque or Gothic church, the walls of which rise above the rooflines of the lower aisles and are pierced with windows. In modern usage, clerestory refers to any high windows...
windows, or it may be located as a separate level below the clerestory. It may itself have an outer wall of glass rather than stone. Triforia are sometimes referred to, erroneously, as tribune
Tribune (architecture)
Tribune is an ambiguous — and often misused — architectural term which can have several meanings. Today it most often refers to a dais or stage-like platform, or — in a vaguer sense — any place from which a speech can be prominently made.-Etymology:...
s.

The origin of the term is unknown but probably derived from thoroughfarum, as it was used as a passage from one end of the building to the other. The derivation from Latin
Latin
Latin is an Italic language originally spoken in Latium and Ancient Rome. It, along with most European languages, is a descendant of the ancient Proto-Indo-European language. Although it is considered a dead language, a number of scholars and members of the Christian clergy speak it fluently, and...
tres, three, and foris, door, entrance, might also be possible as at this passage the thoroughfares and doors were in triangle shape as can be imagined from the triangular shape of this area. The triangle shape comes from the sloping roof, as can be seen in the picture on the right between the two arrows.

The earliest examples of triforia are those in the pagan
Paganism
Paganism is a blanket term, typically used to refer to non-Abrahamic, indigenous polytheistic religious traditions....
basilica
Basilica
The Latin word basilica , was originally used to describe a Roman public building, usually located in the forum of a Roman town. Public basilicas began to appear in Hellenistic cities in the 2nd century BC.The term was also applied to buildings used for religious purposes...
s, where a triforium constituted an upper gallery for conversation and business; in the early Christian
Christian
A Christian is a person who adheres to Christianity, an Abrahamic, monotheistic religion based on the life and teachings of Jesus of Nazareth as recorded in the Canonical gospels and the letters of the New Testament...
basilicas such a passageway was usually reserved for women, and the same applied to those in the Eastern Orthodox Church
Eastern Orthodox Church
The Orthodox Church, officially called the Orthodox Catholic Church and commonly referred to as the Eastern Orthodox Church, is the second largest Christian denomination in the world, with an estimated 300 million adherents mainly in the countries of Belarus, Bulgaria, Cyprus, Georgia, Greece,...
. 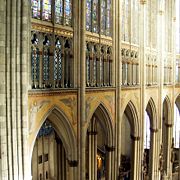 In Romanesque
Romanesque architecture
Romanesque architecture is an architectural style of Medieval Europe characterised by semi-circular arches. There is no consensus for the beginning date of the Romanesque architecture, with proposals ranging from the 6th to the 10th century. It developed in the 12th century into the Gothic style,...
and Gothic
Gothic architecture
Gothic architecture is a style of architecture that flourished during the high and late medieval period. It evolved from Romanesque architecture and was succeeded by Renaissance architecture....
buildings it is either a spacious gallery over the side aisle
Aisle
An aisle is, in general, a space for walking with rows of seats on both sides or with rows of seats on one side and a wall on the other...
s or is reduced to a simple passage in the thickness of the walls; in either case it forms an important architectural division in the nave
Nave
In Romanesque and Gothic Christian abbey, cathedral basilica and church architecture, the nave is the central approach to the high altar, the main body of the church. "Nave" was probably suggested by the keel shape of its vaulting...
of the cathedral
Cathedral
A cathedral is a Christian church that contains the seat of a bishop...
or church, and being of less height gives more importance to the ground storey or nave arcade. In consequence of its lesser height its bay
Bay (architecture)
A bay is a unit of form in architecture. This unit is defined as the zone between the outer edges of an engaged column, pilaster, or post; or within a window frame, doorframe, or vertical 'bas relief' wall form.-Defining elements:...
was usually divided into two arch
Arch
An arch is a structure that spans a space and supports a load. Arches appeared as early as the 2nd millennium BC in Mesopotamian brick architecture and their systematic use started with the Ancient Romans who were the first to apply the technique to a wide range of structures.-Technical aspects:The...
es, which were again subdivided into two smaller arches and these subdivisions increased the apparent scale of the aisle belowe and the clerestory above.

On account of the richness of its mouldings and carved ornament in the sculpture introduced in the spandrils, it became the most highly decorated feature of the interior, the triforium at Lincoln
Lincoln Cathedral
Lincoln Cathedral is a historic Anglican cathedral in Lincoln in England and seat of the Bishop of Lincoln in the Church of England. It was reputedly the tallest building in the world for 249 years . The central spire collapsed in 1549 and was not rebuilt...
being one of the most beautiful compositions of Gothic architecture. Even when reduced to a simple passage it was always a highly enriched feature. In the 15th-century churches in England
England
England is a country that is part of the United Kingdom. It shares land borders with Scotland to the north and Wales to the west; the Irish Sea is to the north west, the Celtic Sea to the south west, with the North Sea to the east and the English Channel to the south separating it from continental...
, when the roof over the aisles was comparatively flat, more height being required for the clerestory windows, the triforium was dispensed with altogether. In the great cathedrals and abbey
Abbey
An abbey is a Catholic monastery or convent, under the authority of an Abbot or an Abbess, who serves as the spiritual father or mother of the community.The term can also refer to an establishment which has long ceased to function as an abbey,...
s the triforium was often occupied by persons who came to witness various ceremonies, and in early days was probably utilized by the monks and clergy for work connected with the church.

The triforium sometimes served structural functions, as under its roof are arches and vaults
Vault (architecture)
A Vault is an architectural term for an arched form used to provide a space with a ceiling or roof. The parts of a vault exert lateral thrust that require a counter resistance. When vaults are built underground, the ground gives all the resistance required...
which carry thrust from the nave to the outer wall. When the flying buttress
Flying buttress
A flying buttress is a specific form of buttressing most strongly associated with Gothic church architecture. The purpose of any buttress is to resist the lateral forces pushing a wall outwards by redirecting them to the ground...
was frankly adopted by the Gothic architect and emphasized by its architectural design as an important feature, other cross arches were introduced under the roof to strengthen it.
The source of this article is wikipedia, the free encyclopedia.  The text of this article is licensed under the GFDL.