Encyclopedia
Cimabue also known as Bencivieni di Pepo or in modern Italian, Benvenuto di Giuseppe, was an Italian
Italy
Italy , officially the Italian Republic languages]] under the European Charter for Regional or Minority Languages. In each of these, Italy's official name is as follows:;;;;;;;;), is a unitary parliamentary republic in South-Central Europe. To the north it borders France, Switzerland, Austria and...
painter
Painting
Painting is the practice of applying paint, pigment, color or other medium to a surface . The application of the medium is commonly applied to the base with a brush but other objects can be used. In art, the term painting describes both the act and the result of the action. However, painting is...
and creator of mosaic
Mosaic
Mosaic is the art of creating images with an assemblage of small pieces of colored glass, stone, or other materials. It may be a technique of decorative art, an aspect of interior decoration, or of cultural and spiritual significance as in a cathedral...
s from Florence
Florence
Florence is the capital city of the Italian region of Tuscany and of the province of Florence. It is the most populous city in Tuscany, with approximately 370,000 inhabitants, expanding to over 1.5 million in the metropolitan area....
.

Cimabue is generally regarded as one of the first great Italian painters to break away from the Italo-Byzantine style, although he still relied on Byzantine models. The art of this period comprised scenes and forms that appeared relatively flat and highly stylized. Cimabue was a pioneer in the move towards naturalism, as his figures were depicted with rather more life-like proportions and shading. Even though he was a pioneer in that move, his Maestà paintings shows Medieval techniques and characteristics. 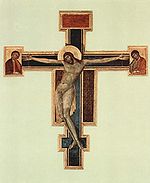 Owing to little surviving documentation, not much is known about Cimabue's life. He was born in Florence and died in Pisa
Pisa
Pisa is a city in Tuscany, Central Italy, on the right bank of the mouth of the River Arno on the Tyrrhenian Sea. It is the capital city of the Province of Pisa...
. His career was described in Giorgio Vasari
Giorgio Vasari
Giorgio Vasari was an Italian painter, writer, historian, and architect, who is famous today for his biographies of Italian artists, considered the ideological foundation of art-historical writing.-Biography:...
's Lives of the Most Excellent Painters, Sculptors, and Architects
Lives of the Most Excellent Painters, Sculptors, and Architects
The Lives of the Most Excellent Italian Painters, Sculptors, and Architects, from Cimabue to Our Times, or Le Vite de' più eccellenti pittori, scultori, e architettori da Cimabue insino a' tempi nostri, as it was originally known in Italian, is a series of artist biographies written by 16th century...
. Although it is one of the few early records about him, its accuracy is uncertain.

He perhaps trained in Florence
Florence
Florence is the capital city of the Italian region of Tuscany and of the province of Florence. It is the most populous city in Tuscany, with approximately 370,000 inhabitants, expanding to over 1.5 million in the metropolitan area....
under unknown masters culturally connected to Byzantine art
Byzantine art
Byzantine art is the term commonly used to describe the artistic products of the Byzantine Empire from about the 5th century until the Fall of Constantinople in 1453....
. However, is first attributed work, the Crucifixion in the church of San Domenico in Arezzo
Arezzo
Arezzo is a city and comune in Central Italy, capital of the province of the same name, located in Tuscany. Arezzo is about 80 km southeast of Florence, at an elevation of 296 m above sea level. In 2011 the population was about 100,000....
(assigned to him by Italian art historian Pietro Toesca and dated to around 1270), he departed from the Byzantine style. His style was at the time more reminiscent of works such as the Christus patiens (c. 1250) by Giunta Pisano
Giunta Pisano
Giunta Pisano was an Italian painter. He is the earliest Italian painter whose name is found inscribed on an extant work. He is best known for his crucifixes.He is said to have exercised his art from 1202 to 1236...
, although Cimabue's Christ is more bent and the clothes have the golden striations introduced by Coppo di Marcovaldo
Coppo di Marcovaldo
Coppo di Marcovaldo was an Italian painter active in Tuscany.-Biography:He was born in Florence, and is mentioned as active in Pistoia in 1265, where he frescoed the St...
. 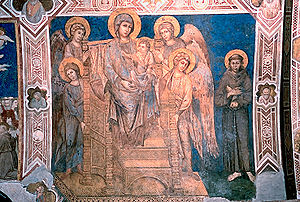 Around 1272 he is documented in Rome
Rome
Rome is the capital of Italy and the country's largest and most populated city and comune, with over 2.7 million residents in . The city is located in the central-western portion of the Italian Peninsula, on the Tiber River within the Lazio region of Italy.Rome's history spans two and a half...
. A little later, he made another Crucifixion for the Florentine church of Santa Croce (incidentally: damaged by the 1966 Arno River flood). This is a larger and more evoluted work than that in Arezzo, with traces of naturalism perhaps inspired by Nicola Pisano
Nicola Pisano
Nicola Pisano was an Italian sculptor whose work is noted for its classical Roman sculptural style. Pisano is sometimes considered to be the founder of modern sculpture.- Early life :His birth date or origins are uncertain...
's works. In the same period (c. 1280) he painted the Maestà
Maestà (Cimabue)
The Maestà is a painting by the Italian artist Cimabue, painted around 1280 and housed in Musée du Louvre of Paris, France.-History:It was acquired by the Louvre in 1813, as part of the Napoleonic spoiling of artworks in Italy, together with Giotto's Stigmata of St...
now at the Louvre Museum, originally in the church of San Francesco at Pisa
Pisa
Pisa is a city in Tuscany, Central Italy, on the right bank of the mouth of the River Arno on the Tyrrhenian Sea. It is the capital city of the Province of Pisa...
. This work established a style which was followed by numerous artists after him, including Duccio di Buoninsegna in his Rucellai Madonna
Rucellai Madonna
The Madonna Rucellai is a painting by the Italian late medieval artist Duccio di Buoninsegna, housed in the Uffizi Gallery of Florence, Italy.- History :...
(once wrongly attributed to Cimabue), as well as Giotto himself. Other works dating to this period, in which the influence of his pupil Giotto becomes manifest, include a Flagellation (Frick Collection
Frick Collection
The Frick Collection is an art museum located in Manhattan, New York City, United States.- History :It is housed in the former Henry Clay Frick House, which was designed by Thomas Hastings and constructed in 1913-1914. John Russell Pope altered and enlarged the building in the early 1930s to adapt...
), mosaics for the Baptistery of Florence (now largely restored), the Maestà of Santa Maria dei Servi at Bologna
Bologna
Bologna is the capital city of Emilia-Romagna, in the Po Valley of Northern Italy. The city lies between the Po River and the Apennine Mountains, more specifically, between the Reno River and the Savena River. Bologna is a lively and cosmopolitan Italian college city, with spectacular history,...
and the Madonna in the Pinacoteca of Castelfiorentino
Castelfiorentino
Castelfiorentino is a comune in the Province of Florence in the Italian region Tuscany, located about 30 km southwest of Florence.The population is approximately 20,000 inhabitants...
. A workshop painting, perhaps assignable to a slightly later period, is the Maestà with Saints Francis and Dominic now at the Uffizi
Uffizi
The Uffizi Gallery , is a museum in Florence, Italy. It is one of the oldest and most famous art museums of the Western world.-History:...
.

During the pontificate of Nicholas V, the first Franciscan pope, Cimabue worked at Assisi
Assisi
- Churches :* The Basilica of San Francesco d'Assisi is a World Heritage Site. The Franciscan monastery, il Sacro Convento, and the lower and upper church of St Francis were begun immediately after his canonization in 1228, and completed in 1253...
. His call was perhaps due to the fame he gained in Rome in 1272, although no works from his stay there are known. At Assisi, in the transept of the Lower Basilica of San Francesco, he frescoed a Madonna with Child Enthroned, Four Angels and St. Francis; the left part of the work is missing, and perhaps showed St. Antony of Padua. The authorship of the painting has been recently disputed for technical and stylistic reasons, however. Cimabue was subsequently commissioned the decoration of the apse and the transept of the Upper Basilica of Assisi, in the same period in which Roman artists were frescoing the nave. The cycle comprises scenes from the Gospels, the life of Mary and of St. Peter and St. Paul, and is today in poor conditions due to the oxidation of the brighter colors.

The Maestà of Santa Trinita, originally painted for the church of Santa Trinita in Florence dates to c. 1290-1300. It is now at the Uffizi Gallery. The softer expression of the characters suggests that it was influenced by Giotto, who was by then already active as a solo artist. Cimabue spent the period from 1301 to 1302 in Pisa, where, together with collaborators, he executed the apse mosaic for the city's cathedral. He died in 1302.

History has long regarded Cimabue as the last of an era that was overshadowed by the Italian Renaissance
Italian Renaissance
The Italian Renaissance began the opening phase of the Renaissance, a period of great cultural change and achievement in Europe that spanned the period from the end of the 13th century to about 1600, marking the transition between Medieval and Early Modern Europe...
. In Canto XI of his Purgatorio
Purgatorio
Purgatorio is the second part of Dante's Divine Comedy, following the Inferno, and preceding the Paradiso. The poem was written in the early 14th century. It is an allegory telling of the climb of Dante up the Mount of Purgatory, guided by the Roman poet Virgil...
, Dante
DANTE
Delivery of Advanced Network Technology to Europe is a not-for-profit organisation that plans, builds and operates the international networks that interconnect the various national research and education networks in Europe and surrounding regions...
laments Cimabue's quick loss of public interest in the face of Giotto's revolution in art:

how briefly lasts the crowning green of glory,

unless an age of darkness follows!

In painting Cimabue thought he held the field

but now it's Giotto has the cry,

so that the other's fame is dimmed.