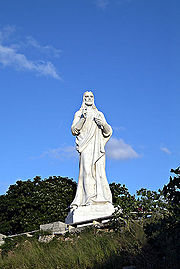 The Christ of Havana is a large sculpture representing Jesus
Jesus
Jesus of Nazareth , commonly referred to as Jesus Christ or simply as Jesus or Christ, is the central figure of Christianity...
of Nazareth
Nazareth
Nazareth is the largest city in the North District of Israel. Known as "the Arab capital of Israel," the population is made up predominantly of Palestinian Arab citizens of Israel...
on a hilltop overlooking the bay in Havana
Havana
Havana is the capital city, province, major port, and leading commercial centre of Cuba. The city proper has a population of 2.1 million inhabitants, and it spans a total of — making it the largest city in the Caribbean region, and the most populous...
, Cuba
Cuba
The Republic of Cuba is an island nation in the Caribbean. The nation of Cuba consists of the main island of Cuba, the Isla de la Juventud, and several archipelagos. Havana is the largest city in Cuba and the country's capital. Santiago de Cuba is the second largest city...
. It is the work of the Cuban
Cubans
Cubans or Cuban people are the inhabitants or citizens of Cuba. Cuba is a multi-ethnic nation, home to people of different ethnic and national backgrounds...
sculptor Jilma Madera
Jilma Madera
Jilma Madera was a well-known Cuban sculptor. Her two most famous works are the Christ of Havana and the bust of José Martí at the Pico Turquino....
(after she won the commission in 1953).

The statue was carved out of white Carrara
Carrara
Carrara is a city and comune in the province of Massa-Carrara , notable for the white or blue-grey marble quarried there. It is on the Carrione River, some west-northwest of Florence....
marble, the same material used for many of the monuments of the Colon Cemetery
Colon Cemetery, Havana
The Colon Cemetery or more fully in the Spanish language Cementerio de Cristóbal Colón was founded in 1876 in the Vedado neighbourhood of Havana, Cuba on top of Espada Cemetery. Named for Christopher Columbus, the 140 acre cemetery is noted for its many elaborately sculpted memorials...
. The statue is about 20 metres (65.6 ft) high including a 3-meter (10 ft) base. It weighs approximately 320 tons. The statue was built from 67 blocks of marble that had been brought from Italy
Italy
Italy , officially the Italian Republic languages]] under the European Charter for Regional or Minority Languages. In each of these, Italy's official name is as follows:;;;;;;;;), is a unitary parliamentary republic in South-Central Europe. To the north it borders France, Switzerland, Austria and...
after being personally blessed by Pope Pius XII
Pope Pius XII
The Venerable Pope Pius XII , born Eugenio Maria Giuseppe Giovanni Pacelli , reigned as Pope, head of the Catholic Church and sovereign of Vatican City State, from 2 March 1939 until his death in 1958....
. The figure of Christ is standing with the right hand held near the chin and the left hand near his chest. Facing the city, the statue was left with empty eyes to give the impression of looking at all, from anywhere to be seen.

The sculpture, located in the Havana suburb of Casablanca, in the municipality of Regla, was inaugurated on La Cabaña
La Cabaña
The Fortaleza de San Carlos de la Cabaña, known as La Cabaña , is an 18th-century fortress complex, the biggest in the Americas, located on the elevated eastern side of the harbor entrance in Havana, Cuba...
hill on December 24, 1958. Just fifteen days after its inauguration, on January 8, 1959, Fidel Castro
Fidel Castro
Fidel Alejandro Castro Ruz is a Cuban revolutionary and politician, having held the position of Prime Minister of Cuba from 1959 to 1976, and then President from 1976 to 2008. He also served as the First Secretary of the Communist Party of Cuba from the party's foundation in 1961 until 2011...
entered Havana during the Cuban revolution
Cuban Revolution
The Cuban Revolution was an armed revolt by Fidel Castro's 26th of July Movement against the regime of Cuban dictator Fulgencio Batista between 1953 and 1959. Batista was finally ousted on 1 January 1959, and was replaced by a revolutionary government led by Castro...
. That same day, the image was hit by lightning, and the head was destroyed. It was subsequently repaired.

The sculpture is located 51 metres (167.3 ft) above sea level, rising to a height of 79 metres (259.2 ft), allowing the locals to see it from many points of the city. There is a panoramic viewpoint at the site of the sculpture.