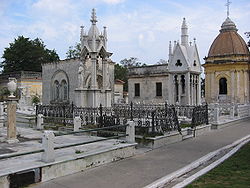 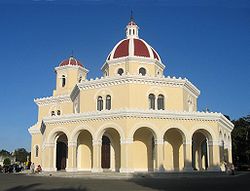 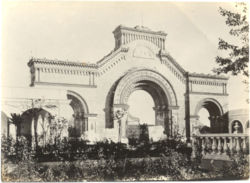 The Colon Cemetery or more fully in the Spanish language
Spanish language
Spanish , also known as Castilian , is a Romance language in the Ibero-Romance group that evolved from several languages and dialects in central-northern Iberia around the 9th century and gradually spread with the expansion of the Kingdom of Castile into central and southern Iberia during the...
Cementerio de Cristóbal Colón was founded in 1876 in the Vedado
Vedado
Vedado is the downtown and a vibrant neighboorhood in the city of Havana, Cuba. Bordered on the east by Central Havana, and on the west by the Miramar/Playa district. The main street running east to west is Calle 23, also known as 'La Rampa'...
neighbourhood of Havana
Havana
Havana is the capital city, province, major port, and leading commercial centre of Cuba. The city proper has a population of 2.1 million inhabitants, and it spans a total of — making it the largest city in the Caribbean region, and the most populous...
, Cuba
Cuba
The Republic of Cuba is an island nation in the Caribbean. The nation of Cuba consists of the main island of Cuba, the Isla de la Juventud, and several archipelagos. Havana is the largest city in Cuba and the country's capital. Santiago de Cuba is the second largest city...
on top of Espada Cemetery
Espada Cemetery
The Espada Cemetery is a disused cemetery located approximately a mile west of the city of Havana, Cuba, near to the coast and close to the San Lázaro Leper Hospital...
. Named for Christopher Columbus
Christopher Columbus
Christopher Columbus was an explorer, colonizer, and navigator, born in the Republic of Genoa, in northwestern Italy. Under the auspices of the Catholic Monarchs of Spain, he completed four voyages across the Atlantic Ocean that led to general European awareness of the American continents in the...
, the 140 acre (57 ha) cemetery is noted for its many elaborately sculpted memorials. It is estimated that today the cemetery has more than 500 major mausoleums, chapels, and family vaults.

Colon Cemetery has a 75 feet (22.9 m)-high monument to the firefighter
Firefighter
Firefighters are rescuers extensively trained primarily to put out hazardous fires that threaten civilian populations and property, to rescue people from car incidents, collapsed and burning buildings and other such situations...
s who lost their lives in the great fire of May 17, 1890. As baseball
Baseball
Baseball is a bat-and-ball sport played between two teams of nine players each. The aim is to score runs by hitting a thrown ball with a bat and touching a series of four bases arranged at the corners of a ninety-foot diamond...
is a leading sport in Cuba, the cemetery has two monuments to baseball players from the Cuban League
Cuban League
The Cuban League was one of the earliest and longest lasting professional baseball leagues outside of the United States, operating in Cuba from 1878 to 1961...
. The first was erected in 1942 and the second in 1951 for members of the Cuban Baseball Hall of Fame
Cuban Baseball Hall of Fame
The Cuban Baseball Hall of Fame is a hall of fame that honors eminent baseball players from the pre-revolution Cuban League. Established in 1939, by 1961 it had honored 68 players whose names are shown on a marble plaque at Havana's Estadio Latinoamericano...
.

With more than 800,000 graves and 1 million interments, space in the Colon Cemetery is currently at a premium and as such after three years remains are removed from their tombs, boxed and placed in a storage building.