Encyclopedia
In chemistry
Chemistry
Chemistry is the science of matter, especially its chemical reactions, but also its composition, structure and properties. Chemistry is concerned with atoms and their interactions with other atoms, and particularly with the properties of chemical bonds....
a chiral ligand is a specially adapted ligand
Ligand
In coordination chemistry, a ligand is an ion or molecule that binds to a central metal atom to form a coordination complex. The bonding between metal and ligand generally involves formal donation of one or more of the ligand's electron pairs. The nature of metal-ligand bonding can range from...
used for asymmetric synthesis. This ligand is an enantiopure organic compound
Organic compound
An organic compound is any member of a large class of gaseous, liquid, or solid chemical compounds whose molecules contain carbon. For historical reasons discussed below, a few types of carbon-containing compounds such as carbides, carbonates, simple oxides of carbon, and cyanides, as well as the...
which combines with a metal
Metal
A metal , is an element, compound, or alloy that is a good conductor of both electricity and heat. Metals are usually malleable and shiny, that is they reflect most of incident light...
center by chelation
Chelation
Chelation is the formation or presence of two or more separate coordinate bonds between apolydentate ligand and a single central atom....
to form an asymmetric catalyst. This catalyst engages in a chemical reaction
Chemical reaction
A chemical reaction is a process that leads to the transformation of one set of chemical substances to another. Chemical reactions can be either spontaneous, requiring no input of energy, or non-spontaneous, typically following the input of some type of energy, such as heat, light or electricity...
and transfers its chirality to the reaction product which as a result also becomes chiral. In an ideal reaction one equivalent of catalyst can turn over
Turnover number
Turnover number has two related meanings:In enzymology, turnover number is defined as the maximum number of molecules of substrate that an enzyme can convert to product per catalytic site per unit of time and can be calculated as follows: kcat = Vmax/[E]T...
many more equivalents of reactant which enables the synthesis of a large amount of a chiral compound from achiral precursors with the aid of a very small (often expensive) chiral ligand.

The first such ligand, the diphosphine
Phosphine
Phosphine is the compound with the chemical formula PH3. It is a colorless, flammable, toxic gas. Pure phosphine is odourless, but technical grade samples have a highly unpleasant odor like garlic or rotting fish, due to the presence of substituted phosphine and diphosphine...
DiPAMP
DIPAMP
DIPAMP is an organophosphorus compound that is used as a ligand in homogeneous catalysis. It is a white solid that dissolves in organic solvents. Work on this compound by W. S. Knowles was recognized with the Nobel Prize in Chemistry. DIPAMP was the basis for of the first practical asymmetric...
was developed in 1968 by William S. Knowles of Monsanto Company, who won the 2001 Nobel Prize in Chemistry
Nobel Prize in Chemistry
The Nobel Prize in Chemistry is awarded annually by the Royal Swedish Academy of Sciences to scientists in the various fields of chemistry. It is one of the five Nobel Prizes established by the will of Alfred Nobel in 1895, awarded for outstanding contributions in chemistry, physics, literature,...
, and ultimately used in the industrial production of L-DOPA. 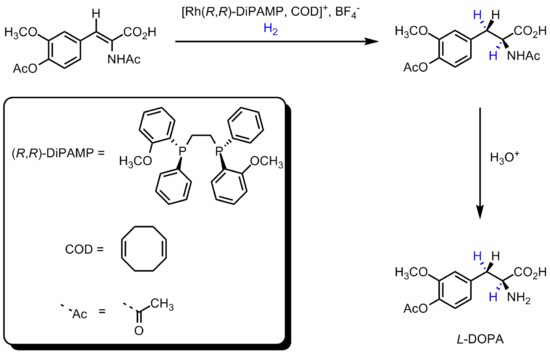 Many thousands of chiral ligands have been prepared and tested since then but only several compound classes have been found to have a general scope. These ligands are therefore called privileged ligands. Important members depicted below are BINOL, BINAP
BINAP
BINAP is an abbreviation for the organophosphorus compound 2,2'-bis-1,1'-binaphthyl. This chiral ligand is widely used in asymmetric synthesis. It consists of a pair of 2-diphenylphosphinonaphthyl groups linked at the 1 and 1´ positions. This C2-symmetric framework lacks stereogenic atom, but...
, TADDOL, DIOP
Diop
Diop is a surname, and may refer to:* Aïda Diop* Birago Diop* Boubacar Boris Diop* Cheikh Anta Diop* DeSagana Diop* Djibril Diop Mambéty Senegalese film director, brother of Wasis Diop* Mamadou Diop* Mustapha Papa Diop...
, BOX
Bisoxazoline ligand
In chemistry, bisoxazoline ligands are chiral ligands based on a bis oxazoline skeleton and used in combination with a metal compound in asymmetric synthesis as a chiral catalyst . Three frequently encountered such ligands are PyBOX, tBuBOX and PhBOX...
and DuPhos
DuPhos
DuPhos is a class of asymmetric ligands for asymmetric synthesis. The name DuPhos is derived from the chemical company that developed this type of ligand and the compound class of phospholanes it belongs to. This diphosphine ligand type was introduced in 1991 by M.J...
(a phosphine ligand), all available as enantiomeric pairs. 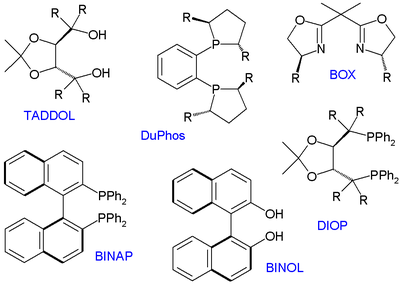 Other members are Salen
Salen ligand
Salen is the abbreviation for a popular chelating ligand used in coordination chemistry and homogeneous catalysis. The name salen is a contraction for salicylaldehyde and ethylenediamine. The ligand is a bright yellow micaceous solid that is soluble in polar organic solvents.-Nomenclature:The...
, cinchona alkaloids and phosphoramidite
Phosphoramidite
Nucleoside phosphoramidites are derivatives of natural or synthetic nucleosides. They are used to synthesize oligonucleotides, relatively short fragments of nucleic acid and their analogs. Nucleoside phosphoramidites were first introduced in 1981 by Beaucage and Caruthers...
s. Many of these ligands possess C2 symmetry
Molecular symmetry
Molecular symmetry in chemistry describes the symmetry present in molecules and the classification of molecules according to their symmetry. Molecular symmetry is a fundamental concept in chemistry, as it can predict or explain many of a molecule's chemical properties, such as its dipole moment...
which limits the number of possible reaction pathways and thereby increasing enantioselectivity. 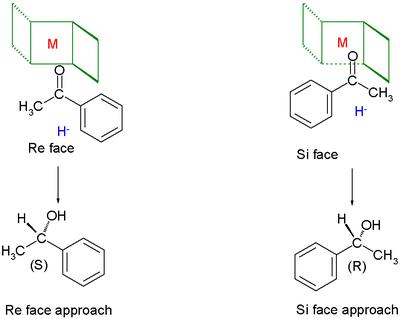 Chiral ligands work asymmetric induction
Asymmetric induction
Asymmetric induction in stereochemistry describes the preferential formation in a chemical reaction of one enantiomer or diastereoisomer over the other as a result of the influence of a chiral feature present in the substrate, reagent, catalyst or environment...
somewhere along the reaction coordinate
Reaction coordinate
In chemistry, a reaction coordinate is an abstract one-dimensional coordinate which represents progress along a reaction pathway. It is usually a geometric parameter that changes during the conversion of one or more molecular entities....
. The image depicted on the right gives a general idea how a chiral ligand may induce an enantioselective reaction. The ligand (in green) has C2 symmetry with its nitrogen, oxygen or phosphorus atoms hugging a central metal atom (in red). In this particular ligand the right side is sticking out and its left side points away. The substrate in this reduction is acetophenone
Acetophenone
Acetophenone is the organic compound with the formula C6H5CCH3. It is the simplest aromatic ketone. This colourless, viscous liquid is a precursor to useful resins and fragrances.-Production:Acetophenone can be obtained by a variety of methods...
and the reagent (in blue) a hydride
Hydride
In chemistry, a hydride is the anion of hydrogen, H−, or, more commonly, a compound in which one or more hydrogen centres have nucleophilic, reducing, or basic properties. In compounds that are regarded as hydrides, hydrogen is bonded to a more electropositive element or group...
ion. In absence of the metal and the ligand the re face approach of the hydride ion gives the (S)-enantiomer and the si face approach the (R)-enantiomer in equal amounts (a racemic mixture like expected). The ligand/metal presence changes all that. The carbonyl
Carbonyl
In organic chemistry, a carbonyl group is a functional group composed of a carbon atom double-bonded to an oxygen atom: C=O. It is common to several classes of organic compounds, as part of many larger functional groups....
group will coordinate with the metal and due to the steric bulk of the phenyl group it will only be able to do so with its si face exposed to the hydride ion with in the ideal situation exclusive formation of the (R) enantiomer. The re face will simple hit the chiral fence. Note that when the ligand is replaced by its mirror image the other enantiomer will form and that a racemic mixture of ligand will once again yield a racemic product. Also note that if the steric bulk of both carbonyl substituents is very similar the strategy will fail.

In a novel concept, so-called chiral ions team up with traditional cationic catalysts in asymmetric synthesis as demonstrated in this allene
Allene
An allene is a compound in which one carbon atom has double bonds with each of its two adjacent carbon centres. Allenes are classified as polyenes with cumulated dienes. The parent compound of allene is propadiene. Compounds with an allene-type structure but with more than three carbon atoms are...
hydroxyalkoxylation in which the active catalyst is a salt of gold(I) and a phosphate
Phosphate
A phosphate, an inorganic chemical, is a salt of phosphoric acid. In organic chemistry, a phosphate, or organophosphate, is an ester of phosphoric acid. Organic phosphates are important in biochemistry and biogeochemistry or ecology. Inorganic phosphates are mined to obtain phosphorus for use in...
of a chiral binaphthol: 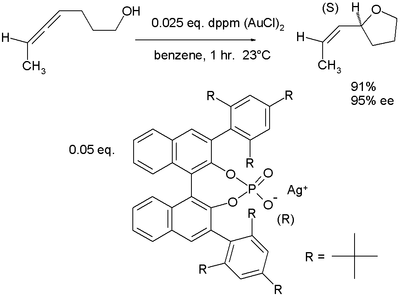