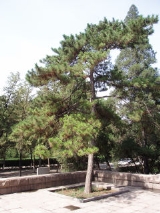 Encyclopedia
The Chinese Red Pine Pinus tabuliformis (油松 yóusōng in Mandarin) is a pine
Pine
Pines are trees in the genus Pinus ,in the family Pinaceae. They make up the monotypic subfamily Pinoideae. There are about 115 species of pine, although different authorities accept between 105 and 125 species.-Etymology:...
native to northern China
China
Chinese civilization may refer to:* China for more general discussion of the country.* Chinese culture* Greater China, the transnational community of ethnic Chinese.* History of China* Sinosphere, the area historically affected by Chinese culture...
from Liaoning
Liaoning
' is a province of the People's Republic of China, located in the northeast of the country. Its one-character abbreviation is "辽" , a name taken from the Liao River that flows through the province. "Níng" means "peace"...
west to Inner Mongolia
Inner Mongolia
Inner Mongolia is an autonomous region of the People's Republic of China, located in the northern region of the country. Inner Mongolia shares an international border with the countries of Mongolia and the Russian Federation...
and Gansu
Gansu
' is a province located in the northwest of the People's Republic of China.It lies between the Tibetan and Huangtu plateaus, and borders Mongolia, Inner Mongolia, and Ningxia to the north, Xinjiang and Qinghai to the west, Sichuan to the south, and Shaanxi to the east...
, and south to Shandong
Shandong
' is a Province located on the eastern coast of the People's Republic of China. Shandong has played a major role in Chinese history from the beginning of Chinese civilization along the lower reaches of the Yellow River and served as a pivotal cultural and religious site for Taoism, Chinese...
, Henan
Henan
Henan , is a province of the People's Republic of China, located in the central part of the country. Its one-character abbreviation is "豫" , named after Yuzhou , a Han Dynasty state that included parts of Henan...
and Shaanxi
Shaanxi
' is a province in the central part of Mainland China, and it includes portions of the Loess Plateau on the middle reaches of the Yellow River in addition to the Qinling Mountains across the southern part of this province...
, and also northern Korea
Korea
Korea ) is an East Asian geographic region that is currently divided into two separate sovereign states — North Korea and South Korea. Located on the Korean Peninsula, Korea is bordered by the People's Republic of China to the northwest, Russia to the northeast, and is separated from Japan to the...
. In some older texts the name is spelled "Pinus tabulaeformis".

It is a medium-sized evergreen
Evergreen
In botany, an evergreen plant is a plant that has leaves in all seasons. This contrasts with deciduous plants, which completely lose their foliage during the winter or dry season.There are many different kinds of evergreen plants, both trees and shrubs...
tree
Tree
A tree is a perennial woody plant. It is most often defined as a woody plant that has many secondary branches supported clear of the ground on a single main stem or trunk with clear apical dominance. A minimum height specification at maturity is cited by some authors, varying from 3 m to...
20-30 m tall, with a flat-topped crown when mature (whence the scientific name, 'table-shaped'). The growth rate is fast when young, but slows with age. The grey-brown bark
Bark
Bark is the outermost layers of stems and roots of woody plants. Plants with bark include trees, woody vines and shrubs. Bark refers to all the tissues outside of the vascular cambium and is a nontechnical term. It overlays the wood and consists of the inner bark and the outer bark. The inner...
fissures at an early age compared to other trees. The broadly spreading shape is very pronounced, in part due to the long horizontal
Horizontal plane
In geometry, physics, astronomy, geography, and related sciences, a plane is said to be horizontal at a given point if it is perpendicular to the gradient of the gravity field at that point— in other words, if apparent gravity makes a plumb bob hang perpendicular to the plane at that point.In...
branching pattern. The needle-like leaves
Leaf
A leaf is an organ of a vascular plant, as defined in botanical terms, and in particular in plant morphology. Foliage is a mass noun that refers to leaves as a feature of plants....
are shiny grey-green, 10-17 cm long and 1.5 mm broad, usually in pairs but occasionally in threes at the tips of strong shoots on young trees. The cones
Conifer cone
A cone is an organ on plants in the division Pinophyta that contains the reproductive structures. The familiar woody cone is the female cone, which produces seeds. The male cones, which produce pollen, are usually herbaceous and much less conspicuous even at full maturity...
are green, ripening brown about 20 months after pollination, broad ovoid, 4-6 cm long, with broad scales, each scale with a small prickle. The seed
Seed
A seed is a small embryonic plant enclosed in a covering called the seed coat, usually with some stored food. It is the product of the ripened ovule of gymnosperm and angiosperm plants which occurs after fertilization and some growth within the mother plant...
s are 6-7 mm long with a 15-20 mm wing, and are wind
Wind
Wind is the flow of gases on a large scale. On Earth, wind consists of the bulk movement of air. In outer space, solar wind is the movement of gases or charged particles from the sun through space, while planetary wind is the outgassing of light chemical elements from a planet's atmosphere into space...
-dispersed.

There are two varieties
Variety (biology)
In botanical nomenclature, variety is a taxonomic rank below that of species: as such, it gets a three-part infraspecific name....
:

Some botanists also treat the closely related Henry's Pine (Pinus henryi) and Sikang Pine (Pinus densata) as varieties of Chinese Red Pine; in some older texts even the very distinct Yunnan Pine (Pinus yunnanensis) is included as a variety.

It is uncommon in cultivation outside of China, grown only in botanical garden
Botanical garden
A botanical garden The terms botanic and botanical, and garden or gardens are used more-or-less interchangeably, although the word botanic is generally reserved for the earlier, more traditional gardens. is a well-tended area displaying a wide range of plants labelled with their botanical names...
s.