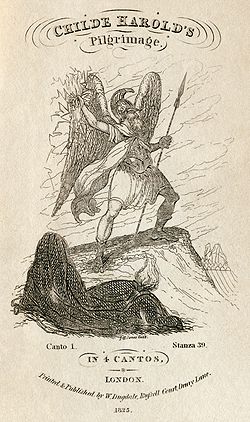 Childe Harold's Pilgrimage is a lengthy narrative poem in four parts written by Lord Byron. It was published between 1812
1812 in poetry
Nationality words link to articles with information on the nation's poetry or literature .-United Kingdom:, which criticized Britain's participation in the Napoleonic Wars* Lord Byron:** The Curse of Minerva...
and 1818
1818 in poetry
Nationality words link to articles with information on the nation's poetry or literature .-John Keats:* In December, Keats is invited by his friend, Charles Armitage Brown, to move into Brown's home at Wentworth Place, in Hampstead, then a pastoral suburb north of London...
and is dedicated to "Ianthe". The poem describes the travels and reflections of a world-weary young man who, disillusioned with a life of pleasure and revelry, looks for distraction in foreign lands. In a wider sense, it is an expression of the melancholy and disillusionment felt by a generation weary of the wars of the post-Revolution
French Revolution
The French Revolution , sometimes distinguished as the 'Great French Revolution' , was a period of radical social and political upheaval in France and Europe. The absolute monarchy that had ruled France for centuries collapsed in three years...
ary and Napoleonic
Napoleonic Era
The Napoleonic Era is a period in the history of France and Europe. It is generally classified as including the fourth and final stage of the French Revolution, the first being the National Assembly, the second being the Legislative Assembly, and the third being the Directory...
eras. The title comes from the term childe, a medieval
Middle Ages
The Middle Ages is a periodization of European history from the 5th century to the 15th century. The Middle Ages follows the fall of the Western Roman Empire in 476 and precedes the Early Modern Era. It is the middle period of a three-period division of Western history: Classic, Medieval and Modern...
title for a young man who was a candidate for knighthood.

The poem contains elements thought to be autobiographical, as Byron generated some of the storyline from experience gained during his travels through Portugal
Portugal
Portugal , officially the Portuguese Republic is a country situated in southwestern Europe on the Iberian Peninsula. Portugal is the westernmost country of Europe, and is bordered by the Atlantic Ocean to the West and South and by Spain to the North and East. The Atlantic archipelagos of the...
, the Mediterranean
Mediterranean Sea
The Mediterranean Sea is a sea connected to the Atlantic Ocean surrounded by the Mediterranean region and almost completely enclosed by land: on the north by Anatolia and Europe, on the south by North Africa, and on the east by the Levant...
and Aegean Sea
Aegean Sea
The Aegean Sea[p] is an elongated embayment of the Mediterranean Sea located between the southern Balkan and Anatolian peninsulas, i.e., between the mainlands of Greece and Turkey. In the north, it is connected to the Marmara Sea and Black Sea by the Dardanelles and Bosporus...
between 1809 and 1811. The "Ianthe
Ianthe
Ianthe was a name attributed to three figures in Greek mythology.*Ianthe was a Cretan girl who was betrothed to Iphis. Iphis was a woman raised as a man; she also fell in love with Ianthe and prayed to the gods to allow the two women to marry...
" of the dedication was the term of endearment he used for Charlotte Harley, the 13-year-old daughter of Lady Oxford (the artist Francis Bacon's great-great-grandmother).

Despite Byron's initial hesitation at having the first two cantos of the poem published because he felt it revealed too much of himself, it was published, at the urging of friends, by John Murray
John Murray (publisher)
John Murray is an English publisher, renowned for the authors it has published in its history, including Jane Austen, Sir Arthur Conan Doyle, Lord Byron, Charles Lyell, Johann Wolfgang von Goethe, Herman Melville, and Charles Darwin...
in 1812, and brought both the poem and its author to immediate and unexpected public attention. Byron later wrote, "I awoke one morning and found myself famous".

The work provided the first example of the Byronic hero
Byronic hero
The Byronic hero is an idealised but flawed character exemplified in the life and writings of English Romantic poet Lord Byron. It was characterised by Lady Caroline Lamb, later a lover of Byron's, as being "mad, bad, and dangerous to know"...
. The idea of the Byronic hero is one that consists of many different characteristics. The hero
Hero
A hero , in Greek mythology and folklore, was originally a demigod, their cult being one of the most distinctive features of ancient Greek religion...
must have a rather high level of intelligence and perception as well as be able to easily adapt to new situations and use cunning to his own gain. It is clear from this description that this hero is well-educated and by extension is rather sophisticated in his style. Aside from the obvious charm and attractiveness that this automatically creates, he struggles with his integrity, being prone to mood swings or bipolar tendencies. Generally, the hero has a disrespect for any figure of authority, thus creating the image of the Byronic hero as an exile or an outcast. The hero also has a tendency to be arrogant and cynical, indulging in self-destructive behaviour which leads to the need to seduce women. Although his sexual attraction through being mysterious is rather helpful, this sexual attraction often gets the hero into trouble. The character of the Byronic hero has appeared in novels, film
Film
A film, also called a movie or motion picture, is a series of still or moving images. It is produced by recording photographic images with cameras, or by creating images using animation techniques or visual effects...
s and plays
Play (theatre)
A play is a form of literature written by a playwright, usually consisting of scripted dialogue between characters, intended for theatrical performance rather than just reading. There are rare dramatists, notably George Bernard Shaw, who have had little preference whether their plays were performed...
ever since.

The poem has four canto
Canto
The canto is a principal form of division in a long poem, especially the epic. The word comes from Italian, meaning "song" or singing. Famous examples of epic poetry which employ the canto division are Lord Byron's Don Juan, Valmiki's Ramayana , Dante's The Divine Comedy , and Ezra Pound's The...
s written in Spenserian stanza
Spenserian stanza
The Spenserian stanza is a fixed verse form invented by Edmund Spenser for his epic poem The Faerie Queene. Each stanza contains nine lines in total: eight lines in iambic pentameter followed by a single 'Alexandrine' line in iambic hexameter. The rhyme scheme of these lines is...
s, which consist of eight iambic pentameter
Iambic pentameter
Iambic pentameter is a commonly used metrical line in traditional verse and verse drama. The term describes the particular rhythm that the words establish in that line. That rhythm is measured in small groups of syllables; these small groups of syllables are called "feet"...
lines followed by one alexandrine
Alexandrine
An alexandrine is a line of poetic meter comprising 12 syllables. Alexandrines are common in the German literature of the Baroque period and in French poetry of the early modern and modern periods. Drama in English often used alexandrines before Marlowe and Shakespeare, by whom it was supplanted...
(a twelve syllable iambic line), and has rhyme
Rhyme
A rhyme is a repetition of similar sounds in two or more words and is most often used in poetry and songs. The word "rhyme" may also refer to a short poem, such as a rhyming couplet or other brief rhyming poem such as nursery rhymes.-Etymology:...
pattern ABABBCBCC. 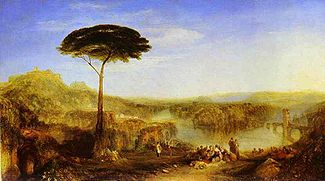