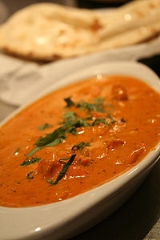 Encyclopedia
Chicken tikka masala is a curry
Curry
Curry is a generic description used throughout Western culture to describe a variety of dishes from Indian, Pakistani, Bangladeshi, Sri Lankan, Thai or other Southeast Asian cuisines...
dish of roasted chicken chunks (tikka
Tikka (food)
Tikka is a type of Indian and Pakistani food.-Food:The word that is pronounced in Hindi and Urdu refers to a piece of meat, such as a cutlet, and the popular dish chicken tikka is made of chicken cutlets in a marinade. A westernised version, chicken tikka masala, a curry, is a widely popular...
) in a spicy (masala
Masala
Masala or massala is a term used in South Asian cuisines to mostly describe a mixture of spices. A masala can either be a combination of dried spices, or a paste made from a mixture of spices and other ingredients—often garlic, ginger, onions and chilli paste...
) sauce. The sauce is usually creamy, spiced and orange-coloured. Chicken Tikka masala has been found to be the most popular dish in British
United Kingdom
The United Kingdom of Great Britain and Northern IrelandIn the United Kingdom and Dependencies, other languages have been officially recognised as legitimate autochthonous languages under the European Charter for Regional or Minority Languages...
restaurants and it has been called "a true British national dish."

Chicken tikka masala is chicken tikka
Chicken Tikka
Chicken tikka is a chicken dish served in Indian and Pakistani cuisine. It is popular in countries all over the world. It is traditionally small pieces of boneless chicken baked using skewers, in a clay-based oven called a tandoor, after marinating in spices and yogurt.The word tikka means "bits,...
, chunks of chicken marinated in spices and yogurt, that is then baked in a tandoor
Tandoor
A tandoor is a cylindrical clay oven used in cooking and baking. The tandoor is used for cooking in Azerbaijan, India, Turkey, Iran, Armenia, Georgia, Pakistan, Uzbekistan, Afghanistan, the Balkans, the Middle East, and Central Asia, as well as Burma and Bangladesh.The heat for a tandoor was...
oven, served in a masala
Masala
Masala or massala is a term used in South Asian cuisines to mostly describe a mixture of spices. A masala can either be a combination of dried spices, or a paste made from a mixture of spices and other ingredients—often garlic, ginger, onions and chilli paste...
("mixture of spices") sauce. A tomato and coriander
Coriander
Coriander is an annual herb in the family Apiaceae. Coriander is native to southern Europe and North Africa to southwestern Asia. It is a soft, hairless plant growing to tall. The leaves are variable in shape, broadly lobed at the base of the plant, and slender and feathery higher on the...
sauce is common, but there is no standard recipe for chicken tikka masala; a survey found that of 48 different recipes, the only common ingredient was chicken tikka. The sauce usually includes tomatoes, frequently as puree; cream
Cream
Cream is a dairy product that is composed of the higher-butterfat layer skimmed from the top of milk before homogenization. In un-homogenized milk, over time, the lighter fat rises to the top. In the industrial production of cream this process is accelerated by using centrifuges called "separators"...
and/or coconut cream
Coconut cream
Coconut cream is very similar to coconut milk but contains less water. The difference is mainly consistency. It has a thicker, more paste-like consistency, while coconut milk is generally a liquid...
; and various spices. The sauce or chicken pieces (or both) are coloured orange with food dyes or with orange foodstuffs such as turmeric
Turmeric
Turmeric is a rhizomatous herbaceous perennial plant of the ginger family, Zingiberaceae. It is native to tropical South Asia and needs temperatures between 20 °C and 30 °C and a considerable amount of annual rainfall to thrive...
powder, paprika
Paprika
Paprika is a spice made from the grinding of dried fruits of Capsicum annuum . In many European languages, the word paprika refers to bell peppers themselves. The seasoning is used in many cuisines to add color and flavor to dishes. Paprika can range from mild to hot...
powder or tomato puree
Tomato purée
The definitions of tomato purée vary from country to country. In the USA, tomato purée is a processed food product, usually consisting of only tomatoes, but can also be found in seasoned form...
. Other tikka masala dishes replace chicken with lamb, fish or paneer
Paneer
Paneer is a fresh cheese common in South Asian cuisine. It is of Indian origin. In eastern parts of India, it is generally called Chhena...
.

One explanation of the origins of the dish is that it was conceived in an Indian restaurant. Rahul Verma, an Indian expert on street food
Street food
Street food is ready-to-eat food or drink sold in a street or other public place, such as a market or fair, by a hawker or vendor, often from a portable stall. While some street foods are regional, many are not, having spread beyond their region of origin. Most street food are both finger and fast...
from Delhi
Delhi
Delhi , officially National Capital Territory of Delhi , is the largest metropolis by area and the second-largest by population in India, next to Mumbai. It is the eighth largest metropolis in the world by population with 16,753,265 inhabitants in the Territory at the 2011 Census...
, has stated that the dish originated, probably by accident with subsequent improvisations, in Punjab during the last 50 years.

Chicken tikka masala is served in restaurants around the world.
A survey in the United Kingdom
United Kingdom
The United Kingdom of Great Britain and Northern IrelandIn the United Kingdom and Dependencies, other languages have been officially recognised as legitimate autochthonous languages under the European Charter for Regional or Minority Languages...
claimed that it is that country's most popular restaurant dish. One in seven curries sold in the UK is chicken tikka masala. The cross-cultural popularity of the dish in the UK led former Foreign Secretary
Secretary of State for Foreign and Commonwealth Affairs
The Secretary of State for Foreign and Commonwealth Affairs, commonly referred to as the Foreign Secretary, is a senior member of Her Majesty's Government heading the Foreign and Commonwealth Office and regarded as one of the Great Offices of State...
Robin Cook
Robin Cook
Robert Finlayson Cook was a British Labour Party politician, who was the Member of Parliament for Livingston from 1983 until his death, and notably served in the Cabinet as Foreign Secretary from 1997 to 2001....
to proclaim it as "a true British national dish
National dish
A national dish is a dish, food or a drink that is considered to represent a particular country, nation or region.A dish can become a national dish for a variety of reasons. It can be the national dish because it is a staple daily food for the majority of the population. It can also be the national...
". Some restaurants in Pakistan, India and Bangladesh offer chicken tikka masala, especially if they expect tourists from the United Kingdom as clients.