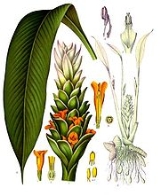 Overview
Turmeric is a rhizomatous herbaceous
Herbaceous
A herbaceous plant is a plant that has leaves and stems that die down at the end of the growing season to the soil level. They have no persistent woody stem above ground...
perennial plant
Perennial plant
A perennial plant or simply perennial is a plant that lives for more than two years. The term is often used to differentiate a plant from shorter lived annuals and biennials. The term is sometimes misused by commercial gardeners or horticulturalists to describe only herbaceous perennials...
of the ginger
Ginger
Ginger is the rhizome of the plant Zingiber officinale, consumed as a delicacy, medicine, or spice. It lends its name to its genus and family . Other notable members of this plant family are turmeric, cardamom, and galangal....
family, Zingiberaceae
Zingiberaceae
Zingiberaceae, or the Ginger family, is a family of flowering plants consisting of aromatic perennial herbs with creeping horizontal or tuberous rhizomes, comprising ca. 52 genera and more than 1300 species, distributed throughout tropical Africa, Asia, and the Americas.Many species are important...
. It is native to tropical South Asia
South Asia
South Asia, also known as Southern Asia, is the southern region of the Asian continent, which comprises the sub-Himalayan countries and, for some authorities , also includes the adjoining countries to the west and the east...
and needs temperatures between 20 °C and 30 °C and a considerable amount of annual rainfall to thrive. Plants are gathered annually for their rhizome
Rhizome
In botany and dendrology, a rhizome is a characteristically horizontal stem of a plant that is usually found underground, often sending out roots and shoots from its nodes...
s, and propagated from some of those rhizomes in the following season.

When not used fresh, the rhizomes are boiled for several hours and then dried in hot ovens, after which they are ground into a deep orange-yellow powder commonly used as a spice
Spice
A spice is a dried seed, fruit, root, bark, or vegetative substance used in nutritionally insignificant quantities as a food additive for flavor, color, or as a preservative that kills harmful bacteria or prevents their growth. It may be used to flavour a dish or to hide other flavours...
in curries and other South Asian
South Asian cuisine
South Asian cuisine, also known as Desi cuisine, includes the cuisines from the Indian subcontinent. It has roots in South Asia, including practices taken from the Hindu beliefs practiced by the large population found in the region, alongside influences from neighbouring regions and cultures,...
and Middle Eastern cuisine
Middle Eastern cuisine
Middle-Eastern cuisine, West Asian cuisine, or in some place in the United States, Persian-Mediterranean cuisine is the cuisine of the various countries and peoples of the Middle East . The cuisine of the region is diverse while having a degree of homogeneity...
, for dyeing, and to impart color to mustard condiments
Mustard (condiment)
Mustard is a condiment made from the seeds of a mustard plant...
.

I have been taking 500mg of Turmeric daily for the past few weeks for minor arthrities in my fingers. At what point should I be able to tell if it is...
More
x