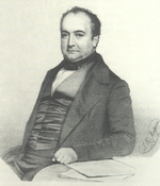 Encyclopedia
Charles Lucien Jules Laurent Bonaparte, 2nd Prince of Canino and Musignano (May 24, 1803 – July 29, 1857) was a French
France
The French Republic , The French Republic , The French Republic , (commonly known as France , is a unitary semi-presidential republic in Western Europe with several overseas territories and islands located on other continents and in the Indian, Pacific, and Atlantic oceans. Metropolitan France...
naturalist
Natural history
Natural history is the scientific research of plants or animals, leaning more towards observational rather than experimental methods of study, and encompasses more research published in magazines than in academic journals. Grouped among the natural sciences, natural history is the systematic study...
and ornithologist
Ornithology
Ornithology is a branch of zoology that concerns the study of birds. Several aspects of ornithology differ from related disciplines, due partly to the high visibility and the aesthetic appeal of birds...
.

Bonaparte was the son of Lucien Bonaparte
Lucien Bonaparte
Lucien Bonaparte, Prince Français, 1st Prince of Canino and Musignano , born Luciano Buonaparte, was the third surviving son of Carlo Buonaparte and his wife Letizia Ramolino....
and Alexandrine de Bleschamp
Alexandrine de Bleschamp
Alexandrine de Bleschamp was a French noblewoman. She was already the widow of the banker Hippolyte Jouberthon , and thus known as "Madame Jouberthon", when she became the second wife of Lucien Bonaparte...
, and nephew of Emperor Napoleon
Napoleon I of France
Napoleon Bonaparte was a French military and political leader during the latter stages of the French Revolution.As Napoleon I, he was Emperor of the French from 1804 to 1815...
. He was raised in Italy
Italy
Italy , officially the Italian Republic languages]] under the European Charter for Regional or Minority Languages. In each of these, Italy's official name is as follows:;;;;;;;;), is a unitary parliamentary republic in South-Central Europe. To the north it borders France, Switzerland, Austria and...
. On June 29, 1822, in Brussels
Brussels
Brussels , officially the Brussels Region or Brussels-Capital Region , is the capital of Belgium and the de facto capital of the European Union...
, he married his cousin
Cousin
In kinship terminology, a cousin is a relative with whom one shares one or more common ancestors. The term is rarely used when referring to a relative in one's immediate family where there is a more specific term . The term "blood relative" can be used synonymously and establishes the existence of...
Zénaïde
Zénaïde Laetitia Julie Bonaparte
Zénaïde Laetitia Julie Bonaparte, Princess of Canino and Musignano was the elder daughter of Joseph Bonaparte and Julie Clary, and the wife of Charles Lucien Bonaparte, who was also her cousin...
. Soon after the marriage, the couple left for Philadelphia to live with Zénaïde's father, Joseph Bonaparte
Joseph Bonaparte
Joseph-Napoléon Bonaparte was the elder brother of Napoleon Bonaparte, who made him King of Naples and Sicily , and later King of Spain...
. Before leaving Italy, Carlo had already discovered a warbler
Old World warbler
The "Old World Warblers" is the name used to describe a large group of birds formerly grouped together in the bird family Sylviidae. The family held over 400 species in over 70 genera, and were the source of much taxonomic confusion. Two families were split out initially, the cisticolas into...
new to science, the Moustached Warbler
Moustached Warbler
The Moustached Warbler, Acrocephalus melanopogon, is an Old World warbler in the genus Acrocephalus. It breeds in southern Europe and southern temperate Asia with a few in north-west Africa. It is partially migratory...
, and on the voyage he collected specimens of a new storm-petrel
Wilson's Storm-petrel
Wilson's Storm Petrel , also known as Wilson's Petrel, is a small seabird of the storm-petrel family. It is one of the most abundant bird species in the world and has a circumpolar distribution mainly in the seas of the southern hemisphere but extending northwards during the summer of the northern...
. On arrival in the United States, he presented a paper on this new bird, which was later named after Alexander Wilson
Alexander Wilson
Alexander Wilson was a Scottish-American poet, ornithologist, naturalist, and illustrator.Wilson was born in Paisley, Scotland, the son of an illiterate distiller. In 1779 he was apprenticed as a weaver. His main interest at this time was in writing poetry...
.

At the end of 1826, Bonaparte and his family returned to Europe. He visited Germany
Germany
Germany , officially the Federal Republic of Germany , is a federal parliamentary republic in Europe. The country consists of 16 states while the capital and largest city is Berlin. Germany covers an area of 357,021 km2 and has a largely temperate seasonal climate...
, where he met Philipp Jakob Cretzschmar
Philipp Jakob Cretzschmar
Philipp Jakob Cretzschmar was a German physician.Cretzschmar was born at Sulzbach and studied medicine at the University of Würzburg. He taught anatomy and zoology at the Senckenberg Medical Institute of Frankfurt....
, and England
England
England is a country that is part of the United Kingdom. It shares land borders with Scotland to the north and Wales to the west; the Irish Sea is to the north west, the Celtic Sea to the south west, with the North Sea to the east and the English Channel to the south separating it from continental...
, where he met John Edward Gray
John Edward Gray
John Edward Gray, FRS was a British zoologist. He was the elder brother of George Robert Gray and son of the pharmacologist and botanist Samuel Frederick Gray ....
at the British Museum
British Museum
The British Museum is a museum of human history and culture in London. Its collections, which number more than seven million objects, are amongst the largest and most comprehensive in the world and originate from all continents, illustrating and documenting the story of human culture from its...
, and renewed his acquaintance with Audubon. In 1828 the family settled in Rome
Rome
Rome is the capital of Italy and the country's largest and most populated city and comune, with over 2.7 million residents in . The city is located in the central-western portion of the Italian Peninsula, on the Tiber River within the Lazio region of Italy.Rome's history spans two and a half...
. In Italy he was the originator of several scientific congresses, and lectured and wrote extensively on American and European ornithology and other branches of natural history. Between 1832 and 1841, Bonaparte published his work on the animals of Italy, Iconografia della Fauna Italica. He had also published Specchio Comparativo delle Ornithologie di Roma e di Filadelfia (Pisa, 1827), presenting a comparison between birds of the latitude of Philadelphia and Italian species. He created the genus Zenaida
Zenaida
Zenaida , Zénaïde , or Zinaida is derived from the , Zenais, "of Zeus"It is a personal name used in many cultures used for women...
, after his wife, for the Mourning Dove and its relatives.

In 1849 he was elected to the Roman Assembly and participated in the creation of the Roman Republic
Roman Republic (19th century)
The Roman Republic was a state declared on February 9, 1849, when the government of Papal States was temporarily substituted by a republican government due to Pope Pius IX's flight to Gaeta. The republic was led by Carlo Armellini, Giuseppe Mazzini and Aurelio Saffi...
. According to Jasper Ridley, when the Assembly convened for the first time: "When the name of Carlo Bonaparte, who was a member for Viterbo, was called, he replied to the roll-call by calling out Long live the Republic!" (Viva la Repubblica!). He participated in the defense of Rome against the 40,000 French troops sent by his cousin Louis Napoleon. He left Rome after the Republican army was defeated in July 1849. He landed at Marseilles but was ordered to leave the country by Louis Napoleon. He reaffirmed his political beliefs the following year in naming Wilson's Bird-of-paradise (Cicinnurus respublica) in honor of the republican idea.

He travelled to England, attending the meeting of the British Association in Birmingham
Birmingham
Birmingham is a city and metropolitan borough in the West Midlands of England. It is the most populous British city outside the capital London, with a population of 1,036,900 , and lies at the heart of the West Midlands conurbation, the second most populous urban area in the United Kingdom with a...
. He then visited Sir William Jardine
William Jardine (naturalist)
Sir William Jardine, 7th Baronet of Applegirth, Dumfriesshire was a Scottish naturalist.-Work:...
in southern Scotland. Charles then began work on preparing a methodical classification of all the birds in the world, visiting museums across Europe to study the collections. In 1850, he was allowed to return to France, and he made Paris his home for the rest of his life. In 1854, he became director of the Jardin des Plantes
Jardin des Plantes
The Jardin des Plantes is the main botanical garden in France. It is one of seven departments of the Muséum national d'histoire naturelle. It is situated in the 5ème arrondissement, Paris, on the left bank of the river Seine and covers 28 hectares .- Garden plan :The grounds of the Jardin des...
. In 1855, he was made a foreign member of the Royal Swedish Academy of Sciences
Royal Swedish Academy of Sciences
The Royal Swedish Academy of Sciences or Kungliga Vetenskapsakademien is one of the Royal Academies of Sweden. The Academy is an independent, non-governmental scientific organization which acts to promote the sciences, primarily the natural sciences and mathematics.The Academy was founded on 2...
. He published the first volume of his Conspectus Generum Avium before his death, the second volume being edited by Hermann Schlegel
Hermann Schlegel
Hermann Schlegel was a German ornithologist and herpetologist.-Early life and education:Schlegel was born at Altenburg, the son of a brassfounder. His father collected butterflies, which stimulated Schlegel's interest in natural history...
.

Lucien and his wife had twelve children, including Cardinal Lucien Bonaparte.

In conjunction with M. de Pouancé, he also prepared descriptive catalogue of pigeons and one of parrots which were published after his death.